Playniac’s bringing a fresh take on the card based battle genre, by tossing in roguelite elements and a whole lot of robots to smash. It seems like one of their most ambitious titles to date, following in the footsteps of Anomaly X and Cat On Yer Head, but the gameplay loop is easy to get in to, and across the 15+ hour campaign, there seems to be a variety of playstyles, but unfortunately the core of what makes up Insane Robots didn’t do a lot to wow me in all honesty.

You assume the role of a simple robot called Franklin, thrown into a battle royale (and not the PUBG kind) in order to secure your freedom. Across each mission, you’ll fight the other robots on the map to the death, but they can also fight each other while you progress, helping take the pressure off of each battle. There’s a variety of augments that Franklin can make use of as well, that help give you unique strategies to approach each randomly generated map. Having the potential for a variety of skills sounds promising, and while things like increased move speed and additional attack strength are definitely useful, there isn’t any kind of substance to the combat in the grand scheme of things Gameplay boils down to a simple back and forth that left me wanting to go insane.

A Glitch In The System

It’s just disappointing to not see Playniac not get very creative with these abilities and augments in the game. For a game called Insane Robots, things certainly didn’t feel very insane. Battles boil down into using attack or defense tokens (in packs of two, for some reason), along with hacks to help give you a bigger advantage in battle. There are also the aforementioned augments, but when you can brute force your way through battles just by having more attack, it doesn’t bode well for the appeal of the combat in the game. Insane Robot’s gameplay feels a little too shallow at times, and it would have been nice to see the type of attacks get really creative, or to implement some kind of Rock Paper Scissors weapon triangle, like other tactical titles. There’s also the weirdly long load times that took me out of the flow of the game for too long. For all the effort put into those surprisingly well animated cutscenes, I’d rather they keep the focus on being able to hop in and out of battles a lot quicker, especially with how each map is condensed enough that it can be powered through as a one off, or can be completed in a marathon session. Load times are always a killer, but these ones seemed excessive considering what it was ultimately bringing up for me. 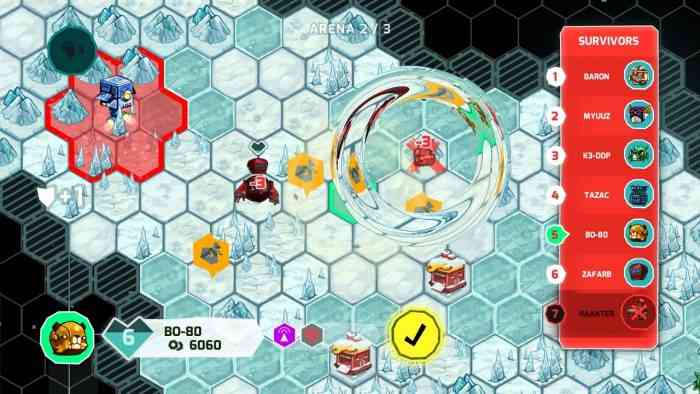 It’s clear that a game like this definitely needs to have more fleshed out combat if that’s going to be your focus The ability to customize Franklin further would have been great, but what’s in the game is admittedly underwhelming. That being said, the overall lack of customization also works in its favour as well to an extent. By not having to worry about any overly complex systems, it’s super easy to get the hang of the game, but it’s also a little disappointing that there is no real sort of depth to battles outside of attack, defend and occasionally hack. There’s a lot of production value put into this title though, and levels are visually distinct. Each robot seems to stand out as well, and the cast doesn’t ever really get too samey which is a nice plus. There’s also plenty of randomized events to help spice battles up as well, and properly implemented roguelite elements can do a lot to help beef up a game overall. Unfortunately, the combat, for how it much of a focus is on it, definitely needs to be fleshed out a little further for this card based battler to really stand out in a sea of indie titles.

It is obviously not fair to paint the entire picture of a game from the initial hours, but the game needs more meat on its bones. There are things to like about the game though, and its clear that Playniac has put effort into the game as a whole based on the overall package. It just feels like the effort was misdirected, as the combat, for a game that is so focused on it, bored me to proverbial tears at points. For those who enjoy card battlers, you may find something to enjoy with Insane Robots, but if you’re looking for a little more depth, you may want to look elsewhere.

The Cycle: Frontier Announces Season 3 With New Enemy “The Howler”
Next Respawn-300 Gaming Chair Review – The Only Chair You’ll Ever Need
Previous Bomber Crew Review – A Wolf in Sheep’s Clothing