Hyrule Warriors (Wii U) Review – Play as Ganondorf? This Game is a Win Right Out the Gate

I’ve done it this time. This is it…this is the hardest review I’ve had to write to date. I’m sitting here in front of my computer at precisely 12:07 am with a near blank page in front of me because I couldn’t stop playing the game that I’m supposed to be writing about. The temptation to just stop here and record a play session instead is near immeasurable. Worse yet, I’m worn ragged. I should be in bed now. Instead I get to lie in a very different bed that I’ve made. I’ll be back…I need some coffee.

Hyrule Warriors is the most surprise fun I’ve had since my “friends” pulled up beside me in an unmarked minivan, put a bag over my head, and drove all the way to Las Vegas having convinced me that I had been kidnapped. Okay, that didn’t happen, but Hyrule Warriors is no less amazing! The thing that’s so surprising about this for me is that I’m not typically a Dynasty Warriors fan (Though I love me some sweet, tasty Zelda). Tecmo Koei has done miracles to make a believer out of me. I’m not even sure where to begin! To give you a better feeling about where I stand with this game, imagine you’ve been given a big old plate of food you aren’t so keen on…only it’s been covered in chocolate hand mixed by oompa loompas.

All of the best from Legend of Zelda and Dynasty Warriors have been blended together into one wonderful, beautiful package. If you look close enough and really boil things down, you can see where each and every gameplay nuance stems from. Hyrule Warriors is the hack and slash baby of Dynasty Warriors; that much is undeniable. The very core of the combat is to romp your way through hordes of enemies and look flashy while doing so. You’ll string together impressive combos by pressing Y and X in specific sequences; the longer the chain, the more strikes you get in on your foes. And not unlike other familiar Dynasty Warriors mechanics, you get a plethora of fancy special attacks which are even more efficient at clearing out baddies. More specifically, you have a focus meter that fills as you fight off the littler monsters which can be used for ultra-powerful attacks against the bigger ones. Anything beyond this is where the Zelda influence comes in. Hyrule Warriors is absolutely brimming with little details. Each character has a row of hearts for health as well as a magic bar which has to be restored by chopping down grass, pots, or villains after you use it. In some cases characters will have a secondary energy meter too. In addition to this, throughout the game you’ll encounter stages bosses and find weapons, such as bombs and the bow, which are used to fight said beasties as well as to travel your way through the terrain. 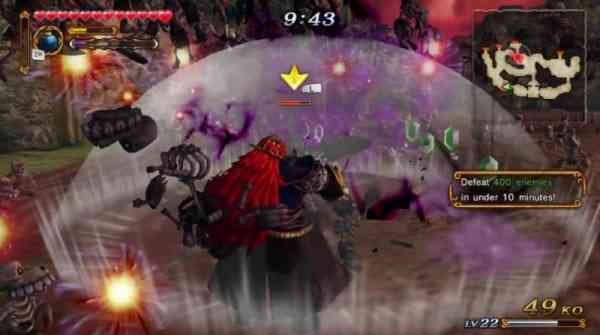 Combat is incredibly satisfying; there’s something to be said about killing ten Bokoblins with a single swipe. More importantly, it’s an amazing feeling to be able to do that as somebody that isn’t Link. Being a longtime Ganondorf fan, being able to play as the perennial bad guy is my child’s wish come true.  That said, the combat is mostly smooth, but it throws a couple of curveballs at times which seem to break the flow of the game. In general, Hyrule Warriors is really fast paced and will send you swinging through literal armies. And as one would imagine, no army is complete without some leadership. This leadership comes in the form of familiar Zelda baddies like Lizafos, Poe’s, and Darknuts. These larger enemies are stronger, have more health, and require a bit more strategy to defeat. Special enemies will sometimes use special attacks after which a sort of “shield” meter will appear above them indicating that their weak point is open to attack. Once this meter is depleted you’ll unleash a mighty strike dealing massive damage. The problem occurs when these enemies choose not to use the attacks that cause them to leave an opening. In some cases I found myself waiting long periods of time between attacks causing gameplay to come to a screeching halt. One cannot argue that strategic combat is a series norm of Zelda, but it comes off as an exact counter to the fast flow that Hyrule Warriors offers.

Hyrule Warriors features three primary game modes.  Legend mode is the game’s story mode, adventure mode has you exploring an 8-bit map of Hyrule from the first Zelda and challenge mode involves an arena and you are assigned random tasks to complete in a set time frame. Before I get into the actual modes I should explain one of this game’s most ingenious and addictively fun mechanics. Not unlike a traditional Zelda title, throughout the game characters can discover pieces of heart and full heart containers to expand their total maximum health. Heart containers are often one time rewards for exploring maps or completing specific challenges.

Ok, back to the game modes. Legend mode sets you off on an adventure to save Hyrule from Evil. While I won’t get into the specifics and spoil anything, legend mode features a plethora of beautiful cinematics, and in true Zelda form, lacks any sort of character voice acting whatsoever. That said, there is narration between missions to help tell the story as it unfolds. Each mission has various hidden treasures to be found depending on which character you choose to play as. The hidden treasures include the aforementioned heart containers and piece of hearts, as well as Golden Skulltulas that when killed give you a piece of an image for an in game art gallery. 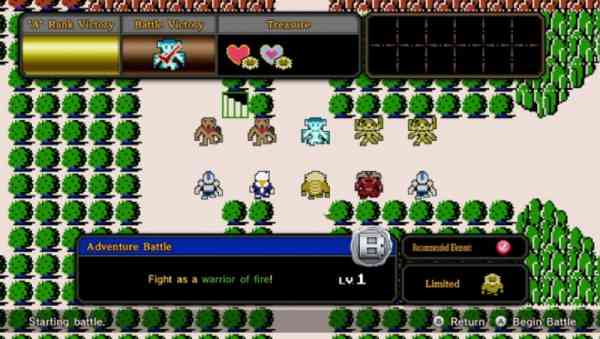 Adventure mode is by far the most expansive mode in game, but it’s also the hardest to explain. Artistically it shrinks its entire scope down into the 8-bit map from the original Zelda on the NES. Each grid square represents a task to be completed such as killing a certain number of monsters within a time frame or killing specific monsters while leaving others intact. Each of these squares also presents you with three things. First, there is a reward for achieving an “A” rank; second, any hidden treasure within the mission itself will be listed; and third, some missions also grant you an item to be used on the map upon completion. Many rewards for missions, even if that mission has already been completed, will be locked until they are “discovered” by using one of the many items that can be earned by finishing other missions. A compass will detect where the item is hidden, while a bomb or candle will clear a rock or tree out of your path. Once this is done the reward will become available for the taking. Much of Hyrule Warriors unlockable content is earned in this mode.

Challenge mode got the least of my attention during my play time. The game starts off with just one scenario for you to play and I didn’t unlock any more along the way. Challenge mode drops you into the middle of a battle field and gives you random missions to fulfil. Each mission is timed, and from what I can tell, depending on whether you pass or fail, it directly affects the next task you need to accomplish. Some of these tasks seemed utterly herculean and I failed more often than I triumphed. Perhaps this mode is best left to those who have spent more time with it than I have been able to.

In each of the game modes available there is a multiplayer option. Hyrule Warriors can be played cooperatively locally, and admittedly the execution of this is really quite cleaver. One player continues to use the TV screen as they would if they had been playing solo. The second player gets a whole other screen to themselves in the form of the GamePad. This is an absolutely wonderful multiplayer solution that I wish more games would adopt. It’s especially suited to this game due to the amount of things happening on screen at any given time. Having split screen would only serve to make thing even more cluttered. Visually however, I noticed a significant drop in image quality when cooperative mode is enabled. Everything seems to lose its HD edge as it gets a little bit fuzzy. I can’t say this surprises me though…I knew there had to be some sort of multiplayer catch. Displaying two separate screens in real time is no small feat. There also seems to be a bit of input lag, though but it doesn’t affect the gameplay experience too much if any. 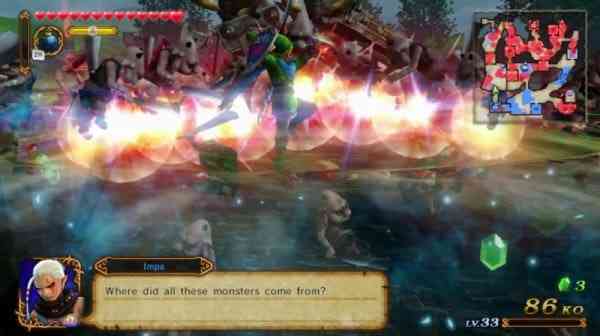 The Legend of Zelda is well known for a number of things, not the least of which is its striking music. Nintendo themselves even put on a traveling live orchestra to honor this on Zelda’s 25th anniversary. The majority of music featured in Hyrule Warriors are remixes, but they are remixes of some of the most timeless Zelda pieces I can think of. The music is pulled from the same three titles that everything else is: Ocarina of Time, Twilight Princess, and Skyward Sword. To be even more specific, these pieces have been sped up and “rocked out” to match the high pace of gameplay. One piece really sticks out for me, though it’s already one of my favorites in its original form, and that is Ballad of the Goddess hailing from Skyward Sword. Beyond the music the sound effects and other sound bites got no less love. Players are rewarded with familiar sounds like the scratching of spider legs when a Golden Skulltula is around, and everyone’s favorite treasure finding tune when a new chest is being opened for the first time. DA-DA-DA-DAAAAA!

Preceded only by the HD remake of Windwaker before it, Hyrule Warriors marks one of the first times The Legend of Zelda has seen through high definition visuals. As a longtime fan of the series this is incredibly gratifying. What’s even better is the nature in which Hyrule Warriors as a game is capable of doing so. Because this game pulls from so many Zelda entries across a long span of time, Hyrule Warriors almost feels like a welcoming ceremony to the world of HD. Seeing so many characters and locations from across the better part of 15 years’ worth of Zelda is reason enough alone to play this game. As with every other corner of this title the small details have had attention paid to them. The loading screens feature a charming 8-bit Link fighting off an Octorok and finding the equally adorable 8-bit Triforce. Additionally, many of the longtime and recurring characters in Zelda get alternate costume skins that pull from the various games that they’ve appeared in. Each skin is faithful to its source material and really helps to drive home the fact that you can actually play as Ocarina of Time Ganondorf! Eat that 1990’s cheat books.

Hyrule Warriors surprised me in the best way it possibly could as I expected a decent and enjoyable, but not overly spectacular game, but what I got was the most fun I’ve had in a game in quite some time. It’s clever use of familiar faces and settings with the most satisfying style of over the top fun to watch combat is flawless. It isn’t without its short comings, but has more than enough strengths to make them seem un-noteworthy. Swatting off legions of Gorons with Ganondorf’s mighty swings might just be my new favourite thing in video games. I hope after reading this that any reservations you have about picking up this well-polished hybrid have been put to rest. I highly suggest you give this mix of franchises a whirl, you won’t regret it.