CastleStorm: Definitive Edition (Xbox One) Review – Knights vs. Vikings, How Can You Go Wrong?

I have the opportunity to review Zen Studios unique mashup of 2D physics destruction and tower defense once again, as I have played the Wii U version and well as the PC version. CastleStorm is an extremely fun action strategy game that has recently made it’s debut on next gen consoles with the Definitive Edition. Jammed packed with not only the original campaign, but 2 DLC packs, 20 new single player battles, new spells and beautiful enhanced graphics, there is a lot to like here.

The story remains unchanged, a lighthearted tale of two kingdoms. The good, a noble group of Knights led by the dashing Sir Gareth, and the bad, a comical group of Vikings stubborn in their ways. In the midst of a terrible war, these two factions fight each other over a stolen gem and it’s return is the only hope to restore peace and order to the land, setting the stage for some truly epic battles. Your primary objective is to destroy the enemy castle or capture their flag, all while defending your own. With game play reminiscent of Angry Birds your primary weapon is a medieval wooden ballista, used to fling powerful projectiles at your opponent. There are a number of different objects to be thrown too, such as deadly javelins to pierce through attacking warriors, spiky morning stars to drop upon giant ogres, even exploding apples to smash into castle walls. But one must be careful as your projectiles not only harm your opponent, but they will harm your own troops as well. 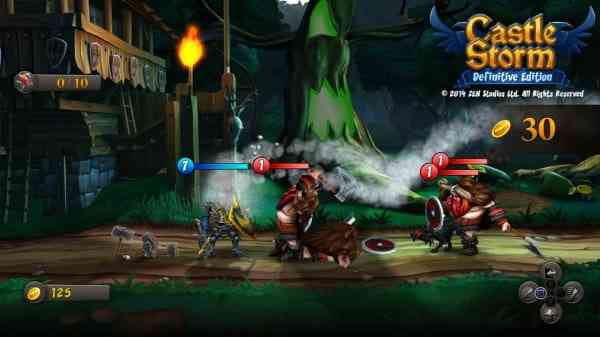 Supporting your ballista are archers, knights, even wolves and packs of donkey riders, spawned from within the walls of your castle to take on the incoming Viking force. This adds a bit of micromanaging to the game, as each unit does have a cool down period and they require food before you can add more to the battlefield. There are also heroes that you can unleash in the midst of battle, including Sir Gareth himself, all who use special weapons and spells for a few moments of frenzied brawler action. Things can get a bit crazy on the battlefield as you constantly watch for cool downs, strategically use your projectiles, all the while preventing the enemy from storming your castle, but after a few tutorial missions you’ll be flinging sheep with the best of them.

Everything can be upgraded offering much customization and different styles of play. Each mission rewards you with gold coins to spend allowing you to unlock more heroes, deadlier weapons and giving you access to more spells and power-ups. While you can play the game with a premade castle, CastleStorm also includes a castle builder for you to dabble with allowing you to create customized castles to suit your battle needs. The rooms in your castles add different types of units to your army, gives you passive bonuses, increases unit size, adds to your food supply, and also adds defense to your structure.

I wasn’t too fond of the controls in previous versions of the game I’ve played as they felt a bit clumsy at times, but I thought the button mapping was perfect on the Xbox One controller, as switching between units and projectiles was comfortable and easy and aiming seemingly seemed more precise. The right and left bumper is used to move between different units, while the X, A and Y allow you to switch between your troops, projectiles and heroes. You can also use your Kinect for some control aspects of the game but I personally did not use this feature as living within earshot of neighbours makes it difficult and feel rather silly doing so. 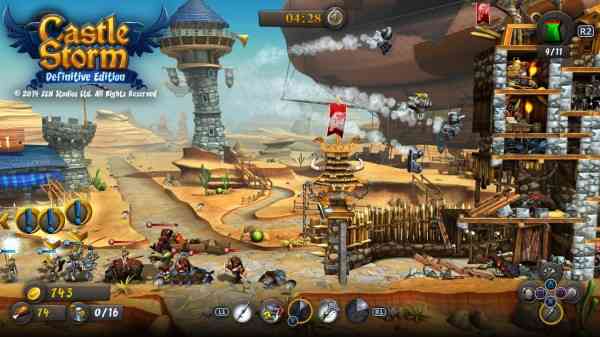 The robust single player stills impresses me, with tons of single player content to play through, giving you the opportunity to play as both the Knights and the Vikings, all adding up to numerous scenarios to play through and bonus objectives to complete. There is so much replay value here, and addition of the “Outcast to Saviour” and the “Warrior Queen” DLC and the 20 additional missions really adds great bang for your buck. There are also multiplayer modes that can be played both locally and online. You and a friend can battle against each other in standard versus mode, or play together in the Survival mode where one player uses the ballista, and the other fights as the hero on the battlefield, which is rather dull in my opinion. Should you wish, you and your friend can also both play as heroes in the Hero Survival mode. Here you both use special hero units and battle waves of incoming enemies, kind of like a Horde mode. This is was my personal favourite multiplayer mode.

The music yet again stands out as one of my favourite parts of CastleStorm, with an awesomely catchy soundtrack by Waterflame, who I discovered much to my delight created some of the music for Castle Crashers. I highly recommend readers to check out the OST on YouTube or Band Camp. As or the visuals, I loved the gorgeous 2D environments and cartoonish characters in the previous versions I’ve played, and on the Xbox One everything looks even more stunning in 1080p. The character models are extremely detailed and the environments look absolutely spectacular. I really enjoyed all the action happening in the background, although some may find it a bit distracting at times.

Despite the addition of the DLC packs bonus missions and beautifully updated graphics, if you’ve previously purchased CastleStorm in the past I find it somewhat difficult to recommend that you buy it again unless you want to get those all important “Xbox One Achievements” or never played the DLC packs. I wish there was some kind of upgrade program in place to purchase it at a reduced cost for those who purchased the game on the Xbox 360 as other titles have done recently. That being said, for those who have yet to experience this highly addictive combination of tower defense, physics destruction and real time strategy, CastleStorm: Definitive Edition offers a unique game experience that is fun to play solo or with friends, and I highly recommend checking it out.

Next Gauntlet (PC) Review – It’s Fun But it’s Not Your Childhood Memories Brought Back to Life
Previous Hyrule Warriors (Wii U) Review – Play as Ganondorf? This Game is a Win Right Out the Gate