Musou, or Warriors games, get something of a bad rap among gamers. Reactions towards the latest Hyrule Warriors title were fairly mixed, with some people losing interest the moment they found out it was a Warriors game at all. I’m here to tell you that those people are wrong. Hyrule Warriors: Age of Calamity is a Zelda title first and foremost. While the Warriors bones are quite visible, Nintendo and Koei Tecmo have managed to make something uniquely compelling out of these disparate components.

Yet I can’t deny that a major part of my interest lies in my connection with both Zelda and Breath of The Wild. This game is all we could ask for in terms of a prequel to BoTW. Anyone who’s curious about the rise of Calamity Ganon, or is itching to play as Urbosa, Daruk, Mipha, or any of the other supporting cast, is in for a delightful experience. Everyone looks and sounds exactly how you remember them, and every cutscene is another window into this long-lost realm. Yet even without these nostalgic trappings, Age of Calamity is still an impressive Warriors game.

Just The Prequel You Were Hoping For

This is to say nothing of the story, which does an admirable job filling out the gaps in the pre-Calamity timeline without straying too far from the original Breath of The Wild world bible. New characters are introduced and slotted neatly into a place beside more familiar faces. Established characters are used to their full effect, providing a simple yet satisfying base layer for future events to build on. It’s a tricky business, adding stakes to a prequel story, but the game manages to pull it off. Although the game is mostly high-octane combat, the story scenes still manage to establish themselves.

Zelda titles are rooted in puzzle solving. Every dungeon is crammed with tricky rooms that demand your full attention. Combat in Age of Calamity takes a similar approach. You’re constantly switching between Sheikah Slate functions, timing perfect dodges, lining up combos, and exploiting critical weak points. Fights are both frantic and thoughtful, an unusual look for your average Warriors game. Rather than the mindless barrage of slashes and dashes I was expecting, Age of Calamity hit me with a parade of tricky boss fights and powerful foes. But even when cutting through a mass of minions, I was never bored in battle. The healthy roster of characters, each with their own unique skills, kept me constantly on my toes.

Even if you only played as Link, his attacks will change depending on the weapon in his hands. Put away the sword, give him a two-handed club, and you’ve got yourself a whole new fighter to figure out. Meanwhile, Zelda’s moves are entirely Slate-based. Changing fighters can put a completely new spin on the most familiar battle scenario. The moves are so diverse that training battles will pop up for each fighter you unlock. Don’t ignore these! I never would have figured out Mipha’s best moves without the extra help.

In fact, you don’t want to ignore any of those icons on your map. Whether it’s an extra combo strike, a second special bar, or more health, none of them are frivolous. I was so diligent about collecting these extra bits that I torpedoed the regular flow of the narrative. Hours would pass between objectives because I couldn’t stop doing side missions. This at least demonstrates how compelling the optional content can be. But what if you don’t want to stray from the primary quest line? In that case, once you unlock the military training node, you can just pay for extra experience. It’s all very streamlined.

The Siren Song of the Sidequest

Even in the midst of this excellent design, Age of Calamity is still a Warriors game at its heart. The RPG elements are fledgling things, boiled down to a succession of unlockable sub-menus. Extra missions, like the main ones, are combat-centric. There’s no exploration, conversation, or dungeon crawling to be found. The Zelda components are extensive yet ephemeral. If you aren’t immediately converted to the Warriors/Musou cause by Age of Calamity’s charms, there’s little hope that you’ll eventually come around. As much as I’ve enjoyed myself, I’ve still had this fun playing a Warriors game.

For me, Hyrule Warriors: Age of Calamity succeeds on two separate fronts. This is a prequel with the narrative heft required for a game in the Zelda franchise. But, this is also a Musou/Warriors game that twists that formula into something unique and engaging. What emerges from this strange union is an experience unlike either set of source material. This is a final product content to carve a small slice out of a massive pie. Even if your interest is strictly in Zelda games or Warriors titles, you owe it to yourself to give this game a shot. You’re certain to be quite pleasantly surprised by what Age of Calamity has to offer.

***A Nintendo Switch code was provided by Nintendo*** 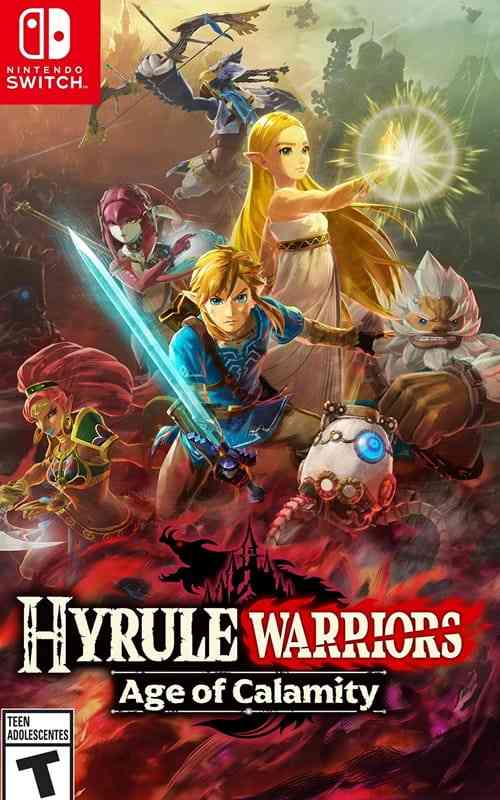