The Xbox Series X/S has recently launched, and with great success too! However, it’s not all smiles for fans of the first-person shooter genre. The most anticipated FPS game, Halo Infinite, is not set to arrive until sometime in 2021 (we hope!). Besides replaying some older first person shooters via Xbox Series X/S backward compatibility, there really isn’t a lot for FPS fans to play at launch. There’s Call of Duty Black Ops: Cold War, which is… okay, and then there’s a little gem called Bright Memory. Bright Memory was created by a one-man development studio and works as a sort of prequel/demo to the upcoming Bright Memory: Infinite. Does Bright Memory have what it takes to satisfy first-person shooter fans?

In Bright Memory, you’ll take on the role of Special Operative Shelia of the Supernatural Science Research Organization, or SRO. Shelia sets out on a mission to track down a private military organization who are in pursuit of the means to raise the dead. You’ll travel to the mysterious Floating Island that hovers above the North Pole. To be honest, the story is bizarre and really doesn’t make much sense over the course of the demo – but I imagine the full game will do a better job at delivering. 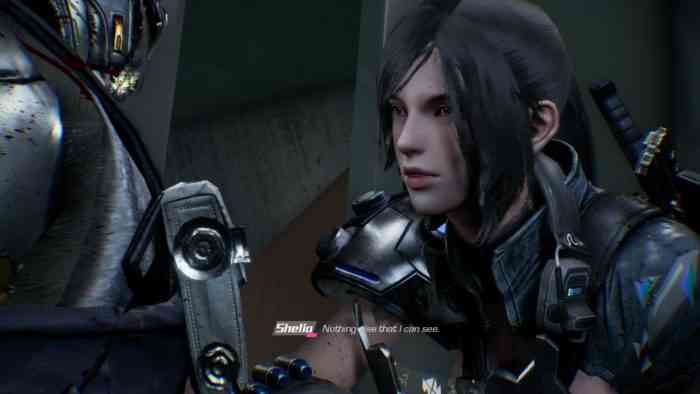 Bright Memory is a first-person shooter, that really tries to set itself apart from standard FPS fare. You’ll be armed with three different guns; a pistol, a shotgun and an assault rifle. Nothing fancy, and really only serve to chip away some damage at the enemies while your abilities recharge. You also have a sword that shoots a light beam at your enemies – kind of like Link’s sword when he has full health in some of the older Legend of Zelda games. Your sword, like other abilities, have a limited use, then must recharge. For most of the game, I would use my sword, then as it charged, I just used my shotgun. You have a grappling hook that you can use on specific grapple points to swing across chasms or to grapple enemies drawing you closer to them. Then you have a number of energy based abilities such as the EMP that will cause enemies in your proximity to pause and hover for a moment. Killing enemies will earn you XP, which you can use to purchase new abilities; offensive, defensive and passive. Unfortunately, there are so many abilities that once you’ve unlocked them all, you’ll need to select a couple of them in very awkward ways, like triple tapping left on the d-pad. Some more intuitive choices with the controller would be much appreciated.

Bright Memory is a linear game with minimal opportunities to explore. The area contained within the demo starts briefly in some facility, then transitions to an outdoor area, which looks really cool, and then the remainder of the game we’re stuck in a sort of cave-like dungeon. As you move from area to area, your progress will be stopped by enemies magically appearing out of thin air. During the course of the demo, you’ll encounter two boss battles, both of which will test your ability to dodge attacks while countering with the variety of abilities discussed earlier. The boss battles aren’t easy and the second one feels a bit “cheap” during the second phase, but after a few tries, I had a workable strategy. 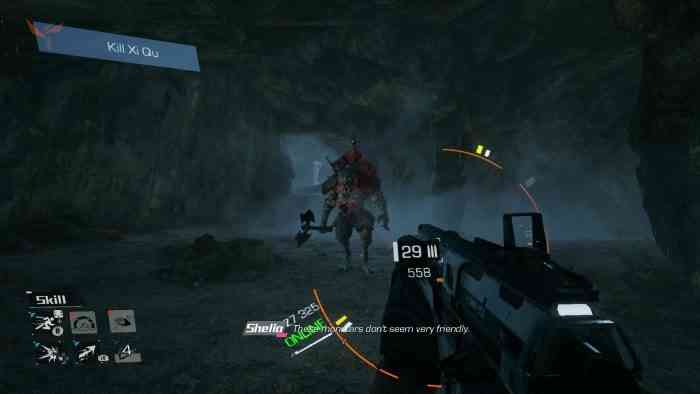 Visually, the game is a mixed bag. The various in-game abilities have some cool glowing particle effects. The protagonist, Shelia, is a very detailed character model, everything about her has been given a lot of attention. The same can be said about the gun models. The level designs and dungeon interiors look good, but after a while feel a tad repetitive. Unfortunately, there are screen tearing issues that pop up quite frequently and really hinder the overall presentation. However, the worst thing about the game’s visuals appears to be a game design decision involving the overabundance of water drop effects that appear on screen. I understand the purpose is meant to convey a feeling a being wet. But, here’s the problem, Shelia doesn’t wear glasses. And we as humans don’t accumulate water drops on our eyes like car windshields would. What’s worse, they even appear when indoors. It’s almost as if the dev created this neat water drop overlay and applied it to the entire game. There really isn’t any logical reason for there to be water drops on screen.

Bright Memory is a very, very short game. I played through it twice, each time the total game time was between 30-40 minutes in length. There isn’t a lot of reason to replay the short campaign either, save for earning Achievements – they even included an Achievement for finishing the game three times. You can dress Shelia up in four different costumes, including the ever-popular school girl outfit, but you really only see them during cutscenes. The game hits a lot of high notes visually, but some design choices, like the bizarre water drop issue and the screen tearing issues, detract from the overall presentation. Another issue worth noting is that you’re essentially paying for a demo/prologue. If you were to purchase Bright Memory on Steam (PC), you would get the full version of Bright Memory: Infinite for free when it eventually releases. On Xbox Series X/S, this is not the case, you will need to purchase Bright Memory: Infinite separately. Bright Memory shows us that Bright Memory: Infinite could potentially be an amazing game, with some great visuals and solid gameplay. Unfortunately, beyond being nothing more than an appetizer, it’s hard to recommend this release. If you’re an FPS fan itching for something to play on your Xbox Series X/S, then this could satisfy you for an afternoon. Otherwise, I would just wait until Bright Memory: Infinite releases.


Signalis Puts the Dread in Dystopia