The visual spectacle of the menu accompanied by the charming electronic beats of Hyperdrive Massacre’s soundtrack immediately pulled me in. And that was after the game was loading with funny quirks like ‘Applying hairjel’, ‘Uploading laser’, and best of all ‘Upscaling to 8 bit’. Developed by 34BigThings, an Italian-based developer that also makes apps, Hyperdrive Massacre is a frenetic 80s-inspired arcade fragfest full of cars old, new, and even mystical. A two-man sci-fi team with a DeLorean, a band of old cowboys in a Western ride, and tectonic metal heads in a vehicle from the distant future. Hyperdrive Massacre oozes style before you even get your hands on the controls as player’s blast their way through fast-paced rounds blowing each other up for glory!

The game is jam-packed with vehicles and maps players can unlock. Maps are equipped with interactive backgrounds and floating asteroids with special ability pick-ups founds inside of them. Players can choose how many rounds they would like to play in any given game mode and can then decide which map order they’d like to play in. These games modes include: Deathmatch, Team Deathmatch, Space Soccer, Spong, Last Man Standing, and Death Race. Spong and Soccer are similar with players boosting to meet a ball in the middle of the screen, with the objective being to blast it into the net of the opponent. Unfortunately, the soccer variant is not nearly as good as last year’s Rocket League, as the floaty controls of the game don’t give way to a tight and responsive play experience as the ball flew around all over the place as my co-op opponent and I blasted each other away in hopes of victory.

“Hyperdrive Massacre understands what it is, and plays to its strength of frenetic multiplayer action to perfection.”

The games co-op offering is at its best in 4-player deathmatch, much like the previously mentioned Rocket League, as players can exit on one edge of the screen and pop up out on the other side which creates a frenetic and stressful – but incredibly fun – environment. Coming back to the abilities, after blasting through asteroid floating in space, pick-ups like a homing rocket or a widespread shotgun alter the flow of the game as AI and human players alike are hunted by the one who controls the Halo-style power weapons. Last Man Standing consists of 9 lives given to each player in a straight duel to the one who survives. After each match, the post-game screen features a Towerfall like stats screen for bragging rights on who kept up the highest average speed and of course who got the most kills. Players can also check their overall stats – including the number of own goals scored in Space Soccer, your total score in the various game modes, and the total distance you’ve covered among other things – via the main menu.

The raw gameplay and controls are floaty and you tend to lose control a lot when you don’t let go of the right trigger to ‘hyperforward’, although it suits the style of the game and watching your perfectly timed bullet match your speed and velocity to hit a target on the other side of the screen is incredibly satisfying. Bullets fly as fast as you can hit the attack button, but when you set CPU difficulty to ‘Remorseless’, it is a bit unfair to see them fire dozens of bullets in two seconds flat while you pull up your shield to try and block attack after attack and eventually take a beating. You’re able to individually choose the vehicles and difficulty level for each CPU you add to a match which I didn’t find very useful seeing as though the strongest CPU would obliterate the rest of the party if they weren’t on level footing. 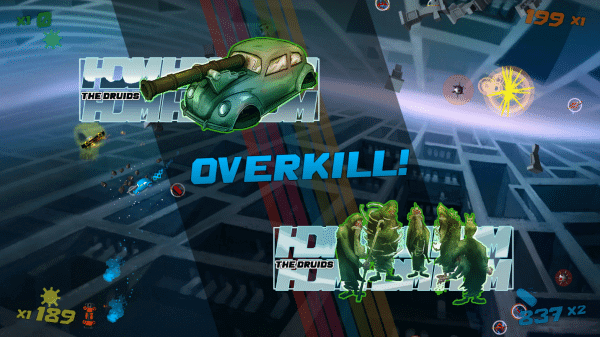 Players can also place mines that lock on to targets hovering near them, and also blow up any incoming projectile with a well-placed shot. It’s imperative to use a combination of mine places, shield blocking, and attacking when the time is right to secure victory. This is especially important in the Death Race game mode where players race to a timed object that spawns randomly on the screen which increases its points total as seconds tick by. It was hilarious to blow up an opponent just as they neared the pickup with a powerful laser beam and collect the points for yourself. As games of Death Race winded down to the point’s total, it was all about keeping composure and making sure you both hit your shots and avoid any incoming fire, as spawning back in takes up a crucial few seconds.

Hyperdrive Massacre understands what it is, and plays to its strength of frenetic multiplayer action to perfection. While larger and more interactive maps would add complexity to each rounds general flow, the close proximity of adversaries as it is now makes for hilariously frenetic matches as I would sometimes stick to one corner of the map to defend, or roam around freely taking risks and eventually crashing into stray projectiles. The game oozes style in its art and electro soundtrack that only adds to the games charm. 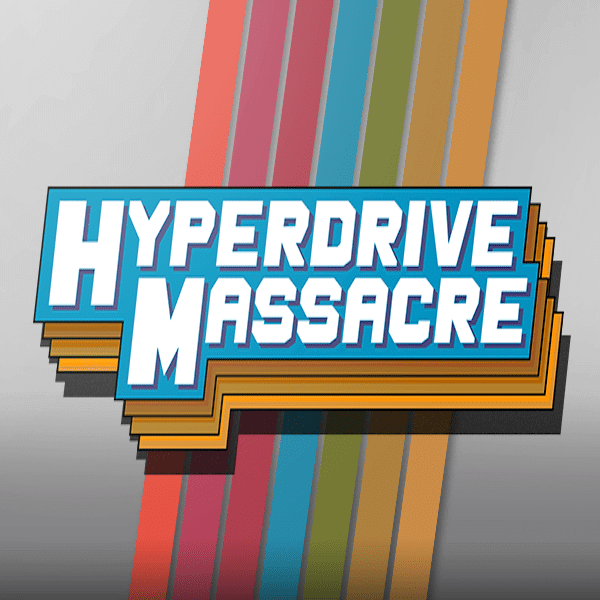