Following their success with the Gauntlet reboot last year, Arrowhead has delivered another great 4-player co-op game in Helldivers, . While much of the core gameplay shares similar mechanics they’ve done a great job at using existing tech to make something different. Guns, aliens, and air support all change the actual play tremendously. Top this off with two of my favorite things, a magazine-based ammo system and friendly fire, and now you’re cooking with gas. Cooking bugs, that is.

Before we get too far I have to admit, I’m a little biased. I’m a huge Starship Troopers fan and at times I felt like I was basically playing Starship Troopers: The Game. Over-the-top propaganda, gory firefights, and a never-ending alien bug menace are delivered superbly in Helldivers. Remarkably, it seems more inspiration was actually taken from the book itself rather than the movie. The drop pods and the planet/enemy variety was always something I wished they’d been able to accomplish on the big screen but not anymore!

For those of you unfamiliar with anything I mentioned in the last two paragraphs, and to maybe make things a little more clear for those of you who are, Helldivers is a top-down twin-stick shooter. While Gauntlet had the four unique fantasy classes, this time around you’re given a sci-fi themed loadout system instead. Before you drop down to the planet to complete your mission, you can customize the way you fight. There are a slew of weapons, perks, and stratagems to choose from to make each player feel unique. In addition, you can change various parts of your outfit as well. As you rank up and complete missions, new pieces of equipment are unlocked. 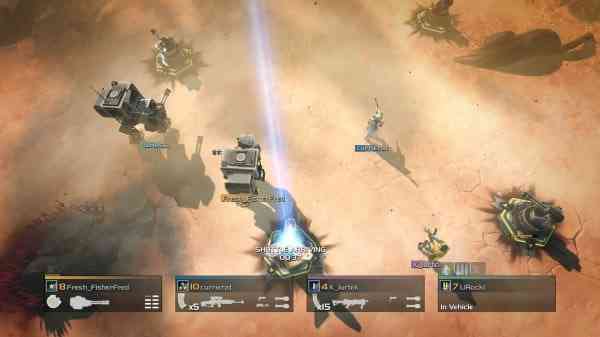 “I felt like I was playing Starship Troopers: The Game. Over-the-top propaganda, gory firefights, and a never-ending alien bug menace are delivered superbly in Helldivers.”

The stratagems are really where the game shines. By inputting a quick code via the d-pad, your character can summon support such as air strikes, personal UAVs, turrets, and even exo-suits. It doesn’t get much more badass than when you’re waiting for the final shuttle on a high-level mission, and your whole team busts out turrets and exo-suits to fend off the enemy horde. Sure, there will be a few obvious choices that you’ll find most people selecting, but for the most part my soldier always felt different. In a 4-player scenario this is important, especially in Helldivers.

So that friendly fire I mentioned earlier actually plays a big part. It’s very easy to not only kill your teammates, but to kill yourself. Weapon fire, drop pods, exo-suits, everything is dangerous. The first time I played with someone else piloting a suit, they quickly ran me over by mistake. I had stopped walking to bring up the map, and my teammate just stomped all over me. Dozens of times I was the one doing the stomping, shooting, or it was my ammo drop that squished some poor soul. Yet the entire time, it was fun. It’s pretty easy to bring a party member to his feet, and if for some reason they die instantly or you just can’t make it in time you can always drop a reinforcement beacon for them. Because of this, Arrowhead has made dying fun for everyone. Sure, you’ll occasionally get thrown into a lobby with someone griefing everyone else, but the leader can always just boot people. Unfortunately, it’s the lobby system itself that causes Helldivers to fall a tad short. 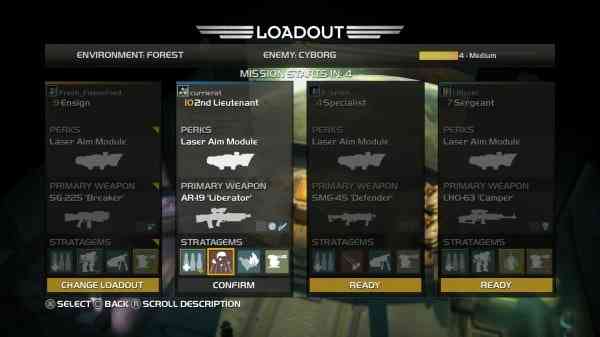 “It doesn’t get much more badass than when you’re waiting for the final shuttle on a high-level mission, and your whole team busts out turrets and exo-suits to fend off the enemy horde.”

There is no quick matchmaking. You select the multiplayer teleport, then look for open games using a filter. It can take a while to find a good team that’s actually looking for a third or fourth. You’ll likely match up with some people who forgot to set the party to friends only and get booted as well. It’s somewhat aggravating when you’ve been looking for ages for a group to join, only to be kicked five seconds after dropping into the mission. Honestly I think this is Helldivers’ biggest downfall and I really hope the development team can come up with a way to fix it. As is, if you want to play with a consistent party then I suggest you convince a few friends to buy it with you. Alas, even with friends you might find yourself alone. It hasn’t quite been a week since release, but there have been multiple network issues for me. Several times I’ve been unable to connect to the servers and was left to my own devices.

Playing the game by yourself can quickly become a challenge. You’ll likely breeze through the first few levels, but there’s a reason the difficulty is titled “dive in the park” or “very easy”. Helldivers is certainly meant to be played with a team. I’m sure you could probably grind some easy missions for a while and slowly work your way up, but a lot of the cooler rewards are on much more difficult planets. Fights just get way too hectic at times and you’ll find earlier stratagems like the turret can no longer do all your work for you when the going gets tough. 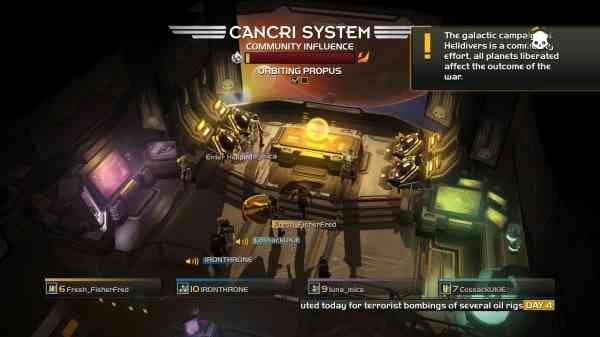 “This can easily be one of the most fun co-op experiences all year, for both indie and AAA titles.”

The enemies you encounter become much more diverse and challenging as well. Bugs are only the beginning; as you unlock other parts of the galaxy to fight in you’ll face off against one of three factions: cyborgs, bugs, and illuminates. Now all of a sudden you’re being shot at by ranged enemies, or you have to deal with armour and your guns just don’t cut it anymore. It was nice to see a wide variety of foes. If you take it slow and actually play through all the missions sequentially, it takes quite a while to even see every unit for the first time. There’s a pretty good amount of content for a twenty dollar title.

As long as the network issues can be sorted out, I have a lot of great expectations for Helldivers. This can easily be one of the most fun co-op experiences all year, for both indie and AAA titles. It’s perfect for anyone looking for something to play with a few friends. The real question is though, are you ready to save the universe? If not, you should probably leave Helldivers alone. It takes some real grit and courage to join the ranks of the Heroes of the Federation. Good luck, soldier.

Next Ori and the Blind Forest Review – A Classic ‘Metroidvania’ Game on a Current-Gen Console
Previous DmC: Devil May Cry ‘Definitive Edition’ Review – Ninja Theory Revamps its Reboot with SSStyle