Let’s make something clear right now; I am not the best 2D side scrolling shooter gamer.  Yep, it’s true, there are some games that I don’t excel at, but that doesn’t stop me from trying to enjoy that which I am not an expert at.   When Ori and the Blind Forest was announced at E3 2014 it definitely had my attention.  Following its unveiling at Microsoft’s press conference I managed to attend a meeting with the dev-team to learn more, and after walking out I found myself wanting to play this game.  Well, over the past few days I have been playing the final retail build and I have to say that gaming fans everywhere are in for a treat.

One of the first things that struck me was the solid and somewhat heart-wrenching story.  In a nutshell, and without ruining anything, Ori is cast away from his home and raised by his “adopted” mother Naru when suddenly their home is stuck by disaster and Ori must venture out to save his world.  As you make your way through the game’s levels, healing various areas and vanquishing various creatures, you’ll find yourself very attached to Ori and what he represents. 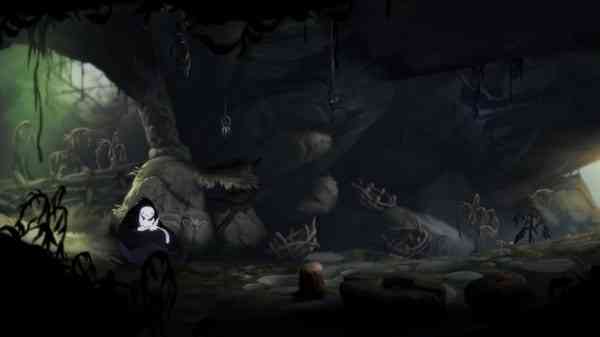 During my time with the dev-team at E3 I discovered that Ori and the Blind Forest is a game that is made with “Metroidvania” in mind.  For those unaware of term, it’s based on the games Metroid and Castlevania.  For many, these two series are the pinnacle of what 2D side scrolling shooters are all about, mix the two and you pay homage to both of the franchises.  In regards to Ori and the Blind Forest, Moon Studios have created a modern “Metroidvania” game that has a huge amount of narrative.  What is even more amazing is that members of Moon Studios are not centralized in one main studio as they live all across the globe.  I learned that all the members, no matter where they reside, contributed daily to the game over the past four years, and the result is one where the final gameplay is amazing, even for a rookie in this genre like me.

Control in a game like this is important.  Happily, Ori and the Blind Forest has ‘pixel perfect’ control as you have to time your jumps, shots and moves almost perfectly.  Death will come frequently, especially for those not accustomed to this type of game.  Death is not a result of bad game design either, as your fate is truly in your own hands.  I am an individual who has been known to try to find a way to blame a game for my demise, but here I came to terms with the fact that my frequent deaths were a result of my own ineptness.  That is what is so good about this game, you’re definitely the one in charge of your own destiny so to speak, as the control is so spot on that you can do amazing things, or you can die trying.

For those that will die a lot don’t worry, Moon Studios has instilled a save feature where you can save almost anywhere.  Once you complete a certain section you can save instead of having to die over and over and get back to a pre-determined save point.  Again, you are indeed in charge as you can save at those points where you find yourself just making through with a fraction of life left.  It’s satisfying to have this feature as once I got through some troublesome areas I saved and then allowed myself to bask in my accomplishment. 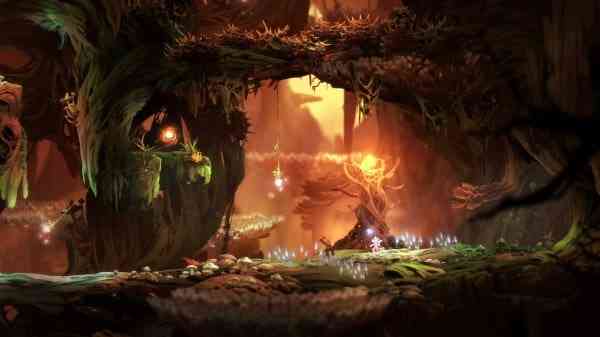 As you play you open up new abilities for Ori, and these abilities are strategic to gameplay.  There are key sequences in the story where you are bestowed a new ability (e.g. double jump, glide, etc.) that will allow you to access new areas or go back to previous areas that you passed early on as you could not reach them.  Along with these key abilities comes an RPG like skill tree that allows you to gain and power-up other abilities, such as the ability to shoot at enemies, use less energy when doing so, or being able earn energy quicker to save your progress.  These abilities are key in allowing you to survive longer, gain stronger attacks, and help manage your health better.  Skill tree progress comes down to your choices, as there are three branches for you to level up by finding ability points or absorbing ability energy from your disposed enemies.

The various natures of the platform gaming in Ori and the Blind Forest should not be overlooked.  As much as there is a lot of action, there is a lot of puzzle solving as well.  From figuring out how to get a certain door open to finding the right path to that one specific object, you’ll find yourself thinking as much as you’ll find yourself killing enemies.   Expect to scratch your head on more than a few occasions as gameplay is as much about brainpower as it is weapon or skill power.

Ori and the Blind Forest is strictly a non-linear, single-player affair given the nature and content of the game, but that is ok here, as I could never imagine a game like it being anything more.  How long it takes you to complete it though is based on a few factors including one’s skill, patience, and how much one wishes to explore to find in-game secrets and items.  Skilled gamers will go through the game in about 7-8 hours, as is evidenced by the leaderboards to date.  Those with less skill, like me, will take longer. I found myself at about 7 hours at the halfway point, as I was searching for everything I could, and of course dying a lot.  Once you finish the game you can go back and get anything you missed or just experience the story, emotions and music all over again. 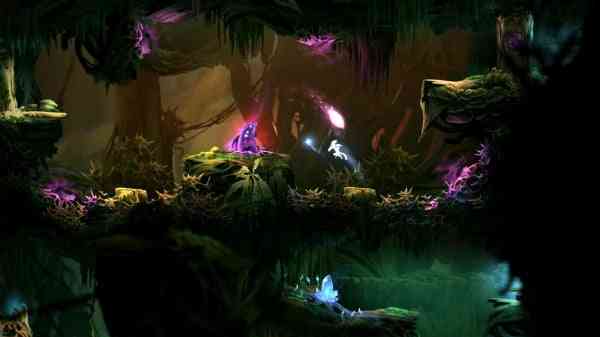 Simply put, the game is a visual stunner.  Everything looks like a piece of hand painted art in motion, and for good reason, as the game was designed as such.  And although you’ll find yourself backtracking in the game now and then, you won’t mind at all given how beautiful the game is.  Each area is unique and nothing is carried from level to level.  There are also a lot of animations going on, from Ori himself to the environments you explore and the enemies you battle.  There is a good use of such things as fog, mist, sunlight and water effects too.  If I had one complaint it was that there was a bit of slowdown now and then, but this was not frequent and it definitely did not hamper the nature of the side scrolling gameplay.

As for the sound, it is just as impressive as the visuals.  The music is the most powerful aspect here.  It really helps pull you into the game’s narrative and the adventure.  Moon Studios used a full orchestra to record the soundtrack in Nashville and the result is fantastic.  Another key aspect are the various cut scenes where the narrator, who is basically Ori’s father, speaks in his native language with the translation coming out in text on screen. Each of these moments is as powerful as the music as his booming voice accentuates the perils that Ori faces.  Finally, the game’s sound effects are solid, from jumping into the water and swimming down into the depths, facing off against various enemies, to breaking though walls or floors, each and every sound associated with an action brings the game to life even more.

Ori and the Blind Forest is a title that has set the bar high for modern day “Metroidvania” games.  From the original artwork and the enveloping soundtrack to the pixel perfect control and heartfelt narrative, anyone who plays this game will find themself hooked from the get-go. Do yourself a favour, don’t pass on this game, especially for the price, as you’d be missing out on a really great gaming experience.