Having watched hundreds of soccer matches on TV of my beloved Chelsea FC, I’d like to think I know a thing or two about player techniques and tactics. When I booted up Headmaster, Playstation VR’s very own heading simulation game, I didn’t go in expecting the same real-world physics I had seen while watching soccer broadcasts. The first ball I hit towards goal made me believe. The exact weight of my connection produced a realistic header from twenty yards out. As the kick-taker launches the ball, a plethora of different shot types and angles are possible and every mistake or perfect touch feels fair. Headmaster has you rack up points, completely hands-free, on a virtual soccer pitch as the game crosses different types of balls towards you to guide in the direction of marked targets. Its premise is simple, but Headmaster kept me on my toes and made me a better player with each passing drill.

The game is set up with a 3-star system that requires you to get a certain amount of stars before being allowed to enter the exams – difficult levels with lots of incoming crosses and a whole bunch of targets. Because of the game’s near-perfect physics, I didn’t want to leave any drill before I felt I couldn’t produce a higher score. Initially, the game starts off with simple crosses and easy targets but becomes almost overwhelming down the line. Explosive balls, the introduction of rings, goalkeepers blocking portions of the net, and a bunch of crazy levels transform the experience from a casual practice session to a frantic slew of head motions and the immediate, “please hit the target,” prayer. Headmaster avoids being unfair by introducing new concepts and mechanics at appropriate times which makes the more frantic levels feel like a culmination of everything you practiced and learned. Never does the game feel unfair as each added difficulty can be mastered in the individual drills prior to the main event exams.

“Headmaster runs away with the ‘gameplay is king’ mantra, and in this case, it’s enough to warrant a hearty recommendation.”

While trying to graduate from the academy, Headmaster features some hilarious commentary from a British announcer who takes you through the ‘puzzles’ a la Portal with Glados. Although the immersion ends there as a cloud of shadows and darkness stops you from observing the environment instead forcing you to focus on the play area where the floodlights are pointing. The particle effects also don’t look that great although, this early into PSVR’s lifecycle, I don’t know whether this can be held against the developer or the technology isn’t powerful enough yet. Credit must be given to Frame Interactive Studio as they have a solid understanding of what it means to make a game in VR. For example, the UI can be interacted with by pointing your head towards the direction of the prompt. Much like the game of soccer itself, hands cannot be used after launching Headmaster, and this simple but efficient design decision helps the flow of the game, especially when restarting drill after drill. 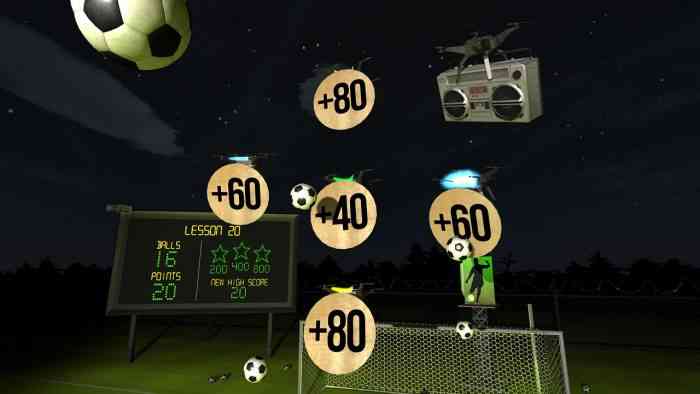 What matters most in a game like Headmaster is how it plays, and this soccer title gets its physics perfect. Having played the sport for years myself, every single header, without exception, went exactly where I thought it would had I closed my eyes directly after the moment of impact. I tried a plethora of ways to see if the game’s physics would fail and produce an unrealistic result. Cushioned headers where I moved my head backward as the ball came in, sideways glances where the ball just tipped my head, and power headers that dipped as they neared goal were all perfectly executed by the game’s physics engine. My best effort was when I put the ball in the top left corner as it slowly soared above the goalkeeper and went back under the crossbar with a slight flick of the head. The speed of the ball and the curl it produced were frighteningly accurate.

Headmaster sports a good amount of levels with increasingly harder odds but it makes the player feel like they deserve to be tested in the exams after going through so many practice drills. This slow progression of skill is aided by the game’s immaculate physics system but the same cannot be said about the bland look and poor particle effects. Headmaster runs away with the ‘gameplay is king’ mantra, and in this case, it’s enough to warrant a hearty recommendation.