PvP is all the rage these days as PUBG and Fortnite dominates the gaming networks and rake in countless dollars. These games have changed the landscape of game development with even Call of Duty abandoning its usual style for the Battle Royale option. Guns of Icarus: Alliance tries its hand in the Royale fray, bringing a steampunk spin to the ever-popular game style. You and your squad (preferably your friends I would imagine) captain an airship and do battle with other factions to determine who rules the skies. While Alliance is quite a bit of fun and well done, Fortnite doesn’t have to worry about its player base too much.

In Guns of Icarus: Alliance, you can choose your role on your airship – Pilot, Gunner, or Engineer. These seem self-explanatory as one flies, one shoots, and one repairs, ensuring you stay in the sky as well as taking enemies down in the process. This is primarily what you’re going to do while tackling Alliance, so you should probably find where you’re strongest. Each role is important, but some are more exciting to do than others.

Before each match you can pick your airship, accessories, guns, armor, and what loadout your character has. The loadout options for characters is not rocket science, as an Engineer has more tools than the gunner but can also man a gun, but overall picking the right tools for the job at hand is important. Hopefully, there are enough people online for you to fly with a full crew because it makes the game infinitely easier. For my crazy schedule, I didn’t always have a full staff and flying with AI is a completely different animal. With other people, you can talk to each other in real time and make sure your airship stays in the skies. For instance, as an engineer, I didn’t happen to notice one of our guns was on fire until our pilot mentioned it and it became integral in our fight to rule the skies. Things like that are what makes Battle Royale fun – playing and planning with like-minded people and beating other people who are doing the same things.

As for playing with AI, it is equal parts rewarding and frustrating. If you can’t fill your crew, the game fills the empty slots in with AI players who, for the most part, try their best to help. It’s rewarding to win with an AI crew because you managed to win with them. As captain, you can deliver messages to the crew via a menu, but the interface isn’t the most user-friendly and it becomes arduous delivering the orders via several clicks on your controller. 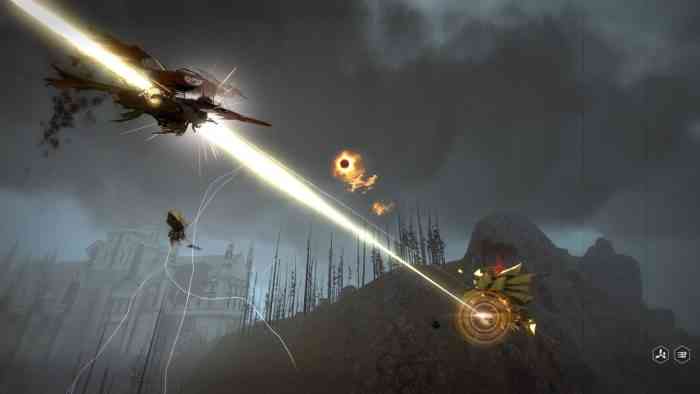 Meanwhile, in the world map, you can finance your selected clans attempt to take over the world. The funds you win in your own matches contribute to the overarching story of the warring clans fighting for dominance. While it doesn’t have much effect on the actual gameplay other than giving you new unlockables, it’s still kind of fun to see the things you invest in paying off.

In saying all of this, it becomes a point of contention to understand that almost of these points have a negative counterpoint. Guns of Icarus: Alliance is a lot of fun to play with a full crew and out-skill another team of interactive human players but the 12th match, it all feels a bit redundant. If you’re flying, the controls are lumbering and cumbersome and even if being an ace flying these ships is a point of pride, it’s more so that you’ve overcome mechanics than out flew another pilot. Gunners have limited range and hopefully, the captain picked the right guns for you to protect the ship because only he has any say said in it. As for engineers, their role is the most important as they repair the damages to the ship and keep things afloat. If you don’t choose to hop on a gun turret from time to time though, you just end up running around the ship, banging each part with a wrench repeatedly until the match is over. Also, the faction choice seems to be of little import as you progress through the game because if you want to unlock everything, you need to play as each of them, which kind of defeats the purpose of backing one in particular.

Overall, Guns of Icarus: Alliance is a steampunk entry into the battle royale gauntlet that has some seriously stiff competition and while it brings a unique spin to the genre, there’s not enough to make it a real threat to the genre. The game is fun and different than most other games I’ve dabbled in, but I found it became redundant quickly. I enjoyed each session I had with the game, but the sessions were short lived, much like my excitement. The cross-platform is a great idea that they pulled off seamlessly which should be congratulated, but the gameplay itself isn’t the most riveting of games. It’s fun for a while but it wears thin quickly. If Icarus had taken a World of Tanks approach and let us try it out for free, it would be well worth a check out. Whether it’s worth the price of admission is mostly dependent on how much you love steampunk and online games.

*** A PC code was provided for review purposes ***

Evil Dead: The Game Has Been Delayed Once Again

The Powers of Light and Dark Meet in Zorya: The Celestial Sisters
Next Death Road To Canada Review – No Apologies From Canadians On This Drive
Previous Battletech Review – One of the Deepest, Densest Strategy Games in Years