A Mystical beast, a brave knight, and an epic adventure, the title says it all. In this 2D shoot’em up you are Sir Oliver and Aquila, here to save your friends and kingdom. Ride your gryphon into combat with a variation of weapons and defeat anyone in your path.

Having defeated a dragon, saved the kingdom, and married a princess, Sir Oliver and his trusty gryphon mount, Aquila, are no strangers to adventure Enjoying their twilight years they are also long retired. After the treasure he plundered from the dragon’s lair years ago has betrayed him, Oliver comes out of retirement to track down his old adventuring party and make sure their treasures haven’t got the best them as well. A simple story giving incentive to go on the adventure what I found missing was good twist; however the story didn’t take anything away from the game.

There aren’t a lot of games that make me have to take a break from playing them because I’ve become so frustrated, but Gryphon Knight Epic definitely made its way to the top. I knew it was designed to be difficult but I didn’t think it was going to be this tough. I’m ashamed to admit it but there were a smattering of rage quit moments. I had to stop playing a few times because once I started swearing at my screen I knew it was time for a break. I was dying at least fifteen plus times on a single boss and this was after I took the rookie route and put it on the easiest difficulty. The casual level sequences didn’t prepare me for the boss fights; then when fighting a boss came it wasn’t clear on how I was supposed to defeat it. Oddly enough, even as I caught myself being frustrated and cussing like a sailor I was still having fun.

“I’m ashamed to admit it but there were a smattering of rage quit moments. Oddly enough, even as I caught myself being frustrated and cussing like a sailor I was still having fun.”

After finally killing a few bosses you get some cool weapons. These weapons are only usable as a ‘special’ weapon, and are powerful AOE attacks that help out when the screen is overflowing with enemies. This drains your energy, so only use when absolutely needed. Each weapon has 3 stages of upgrades making it more powerful, and there are some other basic upgrades regarding your health, energy, and so on. If you want upgrades you better not die. As I tended to die frequently, I had no gold as you lose a substantial amount of it with every death. So don’t follow in my footsteps… if you can.

Using a keyboard and mouse was a horrible choice, the controls were just too clunky. Controls for the keyboard are all cramped together and the controls page in the game doesn’t show the keys for all the controls. It was saying “Z” was to shoot but a mouse click would shoot as well. I ended up pressing every key to see what it did (seriously, ALL OF THEM). All the keys that ended up doing something, yet weren’t labeled on the controls page, were much more intuitive. I later found out you could use a controller to play and when I switched over it helped tremendously. A much lowered my death count makes for a much better score! Save yourself the hassle and use one from the beginning. 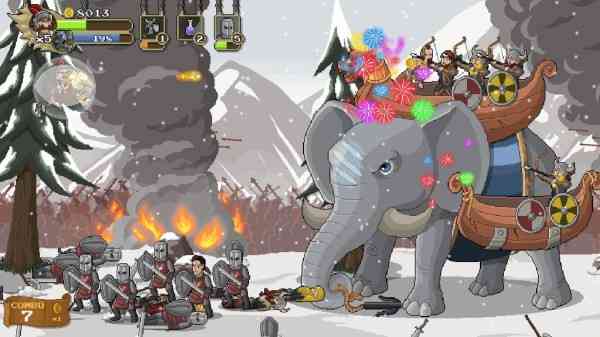 A fairly difficult game, listening to the game audio proved to be the hardest part. With the same ear numbing sound effects playing over and over I had to turn the sound off. The music wasn’t bad, it was just the sound effects. Every enemy type has one sound they play when defeated. No variations, not even a simple pitch shift. It got annoying playing the same level over and over hearing the same enemy death squeal. Unless you’re a glutton for punishment do your ears a favour and turn off the sound effects.

Gryphon Knight Epic is most certainly a game I have mixed thoughts about. Yes, I rage quit a few times but it drew me back in. Yes, sound effects and controls needed more work but I could look past that because it was fun. I really want to love this game more but something deep down says I shouldn’t. Perhaps with a little more time on some polishing (or even a patch) this game would be very easy for me to love. In turn, I think the game is likely better than I’m giving it credit for and that my lack of skill is what really made the game challenging. Go out there and prove me wrong, if you dare.