Four Years and over 500,000 dollars raised, Crate Entertainment has finally fully released its first, and much stalled game, Grim Dawn on Steam. Grim Dawn may be the first game to come from Crate Entertainment, but the development team is far from amateur; the company was founded by Arthur Bruno (Titan Quest) and created from the remains of Iron Lore Entertainment. Crate has gone back to the old ways of isometric ARPGs of the 90s and has tweaked that formula to bring it more in line with modern games. It is not a question of whether these types of games are in demand or require an audience (see Diablo II fans who were disenchanted by Diablo III), but a question of whether Crate could deliver the ARPG tri-fecta of satisfying loot, combat, and skill progression with such a meager budget. Spoiler Alert: They’ve succeeded.

The world of Grim Dawn is set in Cairn, a dark, war-torn world where a once proud empire has been brought to ruin and the human race driven to the edge of extinction. Cairn has become ground zero for an eternal war between two otherworldly powers, the Aetherials and Chthonians, one seeking to use human bodies as a resource, the other intent upon destroying the human race before that can happen. This cataclysmic war has not only decimated human civilization but is warping the very fabric of reality and, in its wake, giving life to new horrors and abominations.

“… the gameplay of Grim Dawn burns brighter than the fire that engulfs the horde of demons you just annihilated.”

Your Character is a human who has been excised of an Aetherial and has been recruited to bring an end to the two factions. As I have reiterated time and time again, the story is always secondary to the game itself. Grim Dawn does a good job in making you mildly interested in the world with a sufficient amount dialogue, dialogue choices and lore books to read. What breaks this interest, however, is the poor voice acting of the NPCs and the sometimes non existent VOs of certain quests or story elements. It may be too much to ask a Kickstarter game to have all the bells and whistles of a AAA RPG, so we won’t hold that too much against them. It should also be noted that your choices in the story can effect gameplay. Depending on your choices, the game assigns you positive or negative reputation. Positive reputation with factions unlocks increasingly more powerful loot and item modifications from vendors, in addition to the usual shop discounts. Negative reputation on the other hand, increases enemy spawns, hero spawns, and eventually causes the dreaded Nemesis spawns—one of Grim Dawn’s forms of endgame content. Furthermore, some of the factions are mutually exclusive, so choose wisely.

Beyond the story, Grim Dawn really starts to hit its stride with its atmosphere. Cairn is a dark and gritty world reminiscent of Diablo ll and its predecessor. You can’t help but feel that this world has been ravaged by evil and its surroundings ooze personality. The MASSIVE hand crafted, open world map has much to do with that character, giving you many caves to explore and optional roads to weave. Graphically, Grim Dawn is nothing to write home about, settling somewhere between The Incredible Adventures of Van Helsing III and Path of Exile and your character model, whether male or female, is pretty ugly. Furthermore, the cut scenes are storyboard stills that, while effective at getting the message of a grim world across, are not going to make you “ooo” and “ahh”. Again, what should we expect from a Kickstarter game? That’s really up to your own personal beliefs to decide. 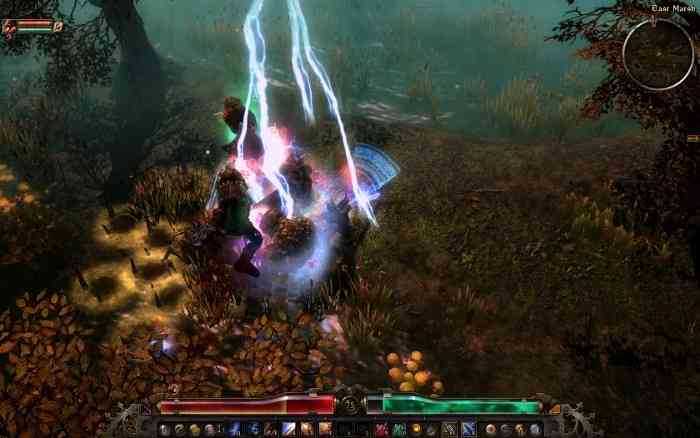 Stepping away from graphics, we move to the gameplay of Grim Dawn which burns brighter than the fire that engulfs the horde of demons you just annihilated. Your character is chosen from one of the six playable classes: Soldier, Nightblade, Shaman, Demolitionist, Arcanist, and Ocultist.  Each class allows you to pick and choose from a multitude of skills and skill modifiers using an interesting class specialized skill tree. The more points you put into the specific class you are playing, the greater access you have to other skills in the tree.  After level 10, you can choose a second class to specialize in. As you can see, there are a multitude of class and skill combinations to make theory crafters weep with joy.

In my Veteran Difficulty playthrough, I chose a gun toting, grenade throwing Demolitionist with an Occutlist secondary specialization in pets. All the skills in each class are interesting and really change the way you play, its not just all about damage numbers. On top of all that customization, the game takes it to the Nth degree through the Devotion System, which allows points earned from restoring sacred shrines to be invested in star sign constellations. The constellation bonuses can further increase not only your characters physical prowess, but imbue proc effects to your attacks or armour. For example, my character had a 30% chance to cause a meteor shower with each attack.  The customization and replayability is seemingly endless, encouraging you to experiment new builds all while being very simple to understand. One could argue that this skill system is near perfect. Items and loot are also interesting, and there is also crafting and socketing that can be done. There are a ton of items that drop, so sorting through the clutter will be a pain, much like any ARPG.

“Crate Entertainment should be applauded for not only pulling off making a fun and deeply satisfying game, but recreating the feel of an old-school isometric RPG with its own personality.”

However, what’s the point of good combat and skill systems when your foes are uninteresting cannon fodder?  Crate Entertainment has righted the wrongs done by Diablo lll‘s cookie cutter meat shields with interesting enemies with variable abilities. Demonic abilities include summoning lightning storms, tidal waves or pools of explosive blood beneath your feet, just to list a few. I always felt a sense of danger when encountering a boss or legendary pack and any death I suffered was my own fault. There’s a sense of exhilaration pulling yourself from the brink with a well timed potion or dodging an ability that could put you away.

All in all, Crate Entertainment should be applauded for not only pulling off making a fun and deeply satisfying game, but recreating the feel of an old-school isometric RPG with its own personality. Though it may not look pretty, it has a charm reminiscent of Diablo II and Diablo. I felt a nostalgic dread turning each corner and felt jubilation in defeating each boss; that is something that can’t be recreated with fancy visuals and flashy skills alone. Depending on how much you like to explore, you will easily sink 30+ hours into the game. For $24.99, it is the best deal on Steam and a must buy for any isometric ARPG enthusiast. 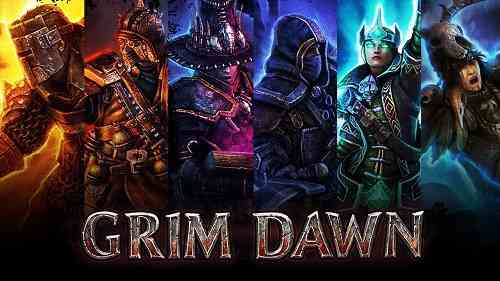 UnDecember Leaping Into Global Service in October
Next Ori and The Blind Forest Definitive Edition Review – Beautifully Punishing in All The Right Ways
Previous Samurai Warriors 4: Empires Review – A Strategic Return for the Samurai Warriors 4 Cast