Good Goliath Review – Throw Down as a Not So Gentle Giant

You are the last of the Giants. The last of the Goliaths. And a good one at that. The problem is, you awaken in a world where everyone views you as a big threat. So with that story setup, you are clear to rain down defensive destruction against evil hordes of humans, soldiers, witches, demons, and even sharks to boot.

Good Goliath (GG) is the brainchild of a bunch of ex-Sony and Disney developers who make up Knock Twice Games and their pedigree shows. GG is a delightful arcade game that is a mix of tower defense and wave shooter. The graphics of the world and characters are bright, colorful, and cartoony, and together they reinforce the mood of the game, which is: FUN! In these social distancing days, GG is the perfect family game to keep parents and children equally delighted and engaged.

There are twelve worlds all set in a medieval age of villages, castles, pirate ships, and caverns. Each environment is destructible to a degree with damage coming from any caught items you throw back at your attackers. Those items range from pitchforks, regular barrels, TNT barrels, wagon wheels, cannon balls, pirates, vikings, warriors, and, oh yeah, sharks. Each object looks crisp and clean. Plus the ones that are alive are animated too. 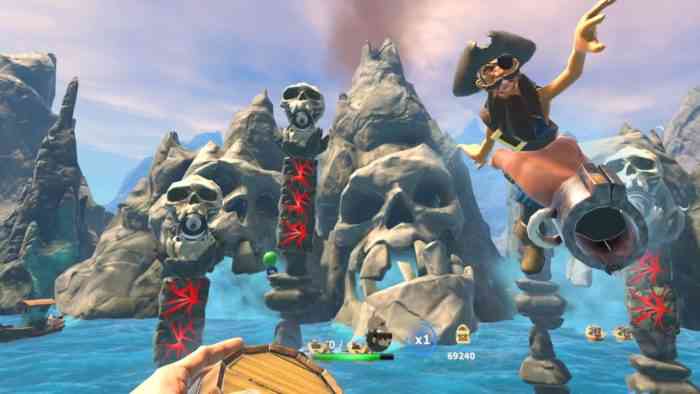 In fact, all the objects and environments look sharp and clean in a highly cartoonish way that eschews any sort of texturing which makes for better VR presentation. And remember, this is all done to scale. A scale appropriate to one where you are looking at the world from a giant’s perspective. Each world or level is laid out before you in 180 degrees. You can look all around you but the remaining 180 degrees of view is just visual filler — usually just water.

The Throws of Battle

The gameplay breaks down into four main components: Punching, dodging, catching, and throwing. Punching and dodging are your defensive tools while the other two are your offensive ones. Your defensive abilities are straight forward and can only be used to do as their names indicate. The catching and throwing have more variance to them. It’s here where the strategy comes into play. You can throw caught objects to knock out or damage an enemy, but the catch is you can only hit one enemy and inflict one point of damage. Some enemies need multiple hits to take them out. In those cases, and if available, there are explosive objects that are better caught and thrown back as they can inflict multiple damage points and take out multiple enemies. Such takeouts also ring up bonus attack points. In one wave of the village level, it is better to take a caught pitchfork and throw it an enemy carrying a barrel of TNT. If hit, then you can catch the TNT and use it take to out a bunch of enemies. In another level, a caught cannon ball can be used as a bowling ball to knock out a bunch of enemies very much in bowling pin style. 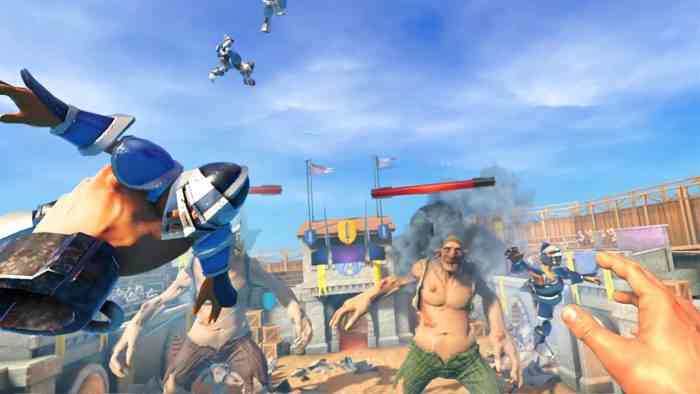 The game is fast-paced fun and keeps coming at you in waves. This points to both the strengths and weakness of the game. Play a couple of levels and you are sure to get arm weary.  This can be tied to two things. The first, at least on PSVR, is tracking. The throwing tracking. Catching works generally well, no doubt due to generous coding. Throwing is more finicky, and due to the limitations of the PSVR platform the game has to be played with two Move controllers which are not ideal for fast moving action, which is what you get as the game levels increase in complexity with more enemies and objects. I never became fully comfortable with the throwing mechanic. Sometimes a throw would land on target, but other times my throws fell short or went long no matter how consistently I tried to throw things.

The second fatigue inducing element is the checkpoint save system. If a level includes five waves of enemies, failure on the last one means a restart back at wave 1. It feels like an artificial element to prolong gameplay. In this day and age, saves should happen after each wave. Or an option should be available to allow a player to restart from the last successful wave.

Those two negative elements aside, the Good Goliath is a fun game that’s great for families and parties.