One of the greatest indie hits has officially received a sequel with Exit The Gungeon surpassing Enter The Gungeon in many ways. Visually it’s similar but improved, the guns are plenty and the gameplay is nearly identical, which is a good thing. The key difference between Exit The Gungeon and Enter The Gungeon is the constant ascent up the tower by using various elevators. This limits the gameplay in comparison to the original but it’s unsurprising because of the games mobile roots on Apple Arcade. As you ascend the Gungeon that gamers descended into with the previous title, randomly generated stages get harder and the enemy projectiles on screen multiply faster than bunnies in the Spring.

The bosses are as comedically whimsical as they were in the first title and you may see some familiar faces among the enemy AI. The title is branded as a small, arcade-style game and although the arcady goodness is as chaotic as ever, this title from Apple Arcade packs a lot into a small package. As you climb the tower, the intensity increases immensely and the only option is to improve or fail like so many times before. While Exit The Gungeon is what I consider a definitive roguelike experience, it’ll provide a lot of challenge for people who are looking to take on the challenge of the “easy to pick up, difficult to master” trope.

The story is as you’d expect, after so much effort delving into the Gungeon you play as the last of the Gungeoneers who’s trying to Exit The Gungeon as it implodes on itself from a time paradox sparked by the first title. While the idea of a gun that could kill the past was definitely a silly concept, we never would’ve guessed that the events of Enter The Gungeon would spark such a story which is effectively told through a brief cinematic and by ascending the tower itself. The environmental storytelling is evident in the main hub of the game where gamers can interact with other characters such as Tailor, a tinkerer who helped create the elevators that allow the gungeoneers to ascend towards the finish line if they survive the enemies and the time paradox. 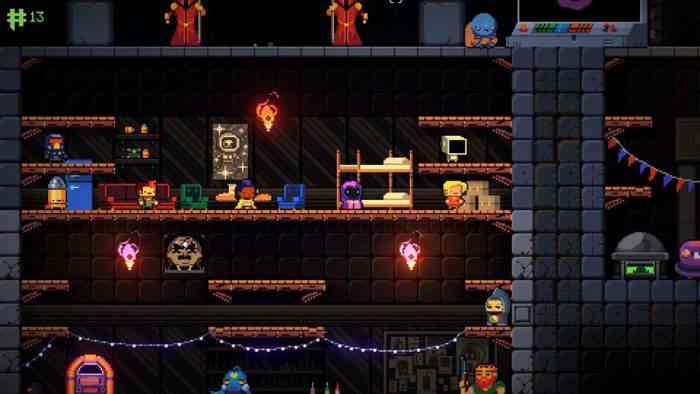 The bosses are entertaining weirdos like a lumpy space emperor in a floating chair and a Dr. Robotnic-like cat named the Meowitzer. These bosses are challenging not only because they fill the screen with projectiles with ease and move around the battlefield effortlessly, but also because they take up so much space on the screen themselves. This is an aspect of the game that I wish stayed on mobile due to the difficulty of not hitting one of the many hazards, leading to many frustrating deaths. Though the endless loop of death is expected in bullet hell and roguelike experiences, it did seem like a severe difficulty increase from the original title simply from the tight levels during boss encounters like the ones who attack you in the elevator created by the Tinkerers.

The NPC’s in the hub uncover pieces of the story and reference the past title for people who are familiar or give a brief rundown of who they are and what’s going on for people who didn’t play the original indie title. There’s a tutorial available that gives new fans of the series a rundown on how the mechanics work and what certain items do. Gamers can choose to play one of four characters: the marine, the convict, the hunter and the pilot. I played most of my experiences as the pilot, having skipped most of the central hub in favor of the fluid bullet hell gameplay. This was a missed opportunity to get to know some of the characters that were important to the original before jumping into the chaotic bullet hell mayhem. 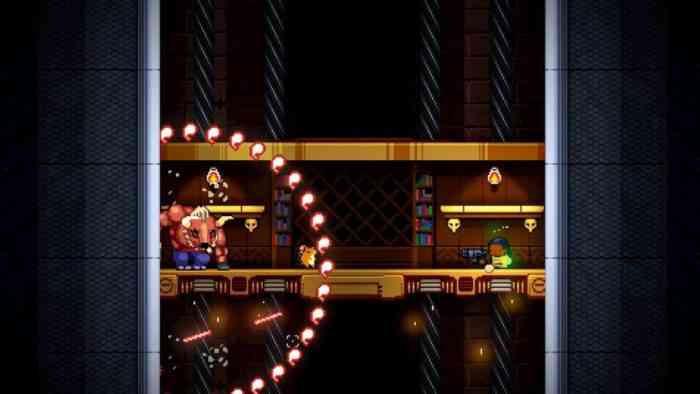 Thankfully, if you’re new to the Gungeon series, you don’t need to play Enter The Gungeon to understand Exit The Gungeon. The game does enough to catch you up on what happened in the first title which is easy as it wasn’t a heavily plot-driven game. These games are more about the gameplay than the story and it shows within moments of playing it. Although I enjoyed the original slightly more than the sequel, Devolver Digital has perfected their version of roguelike bullet hell games. I often wanted the rooms in Exit The Gungeon to be as big as the first title but it was originally designed for Apple Arcade, being limited by what people can do on a mobile device. If you were an Enter The Gungeon fan, this is just more of the same but if you never tried a Gungeon game, I recommend it if you’re up for the challenge.

While I still prefer the original because of the overall size of rooms, I’m impressed with what Dodge Roll did with this sequel. Their bullet hell design is comparable to Galaga and Metal Slug which I consider being two of the best in the genre and this is no exception with Exit The Gungeon. While it’s no shocker this released as a mobile title after playing through several lives as various gungeoneers, I’m impressed with what Dodge Roll was able to accomplish on mobile and am interested in trying the handheld version now that I’ve played it on PC. I admittedly didn’t exit the Gungeon but I had a lot of fun between the Breach and my constant deaths trying to escape the time paradox created with Enter The Gungeon. Although this process often feels like beating my head against a wall with other titles, the charm and chaos of Exit The Gungeon keeps me captivated while my stubbornness forces me to keep picking it up and trying to climb my way out of the Gungeon.