God’s Trigger is a top-down shooter developed by One More Level and published by Techland Publishing. In either single player or co-op, you play as Harry and Judy, a fallen angel and half-reformed demon in their quest to save the world from the Four Horsemen. Why would they team up to save Earth? Well, in the immortal words of Peter Quill, they’re some of the idiots who live in it.

The single word I’d use to describe God’s Trigger would be “stylish.” After that, violent. After that, fun. There are plenty more words in the English language, and I’d like to string some of them together to say that God’s Trigger is a refreshing and enjoyable take on the dichotomy between good and bad, cool and uncool. While Harry and Judy are otherworldly beings, they take the form of two hard-boiled, leather-wearing renegades who like chewing bubblegum and kicking ass.

The world they inhabit is one of poker chips and biker bars, where the neon lights flicker dimly as they carry out asks of unspeakable violence in the name of God or Satan, or whatever will keep the world alive. It never takes itself too seriously, however, and basks in the joy of presenting all the tropes of its genre for you to slice up.

Sometimes the game’s foray into its genre’s tropes went a little too far for me—it’s very fun to burn and slash your way across a Western movie set while fighting souped up cowboys, but I less enjoyed dodging tomahawks from Native Americans dressed in full headdresses. Justifying their existence as movie set extras just felt like an excuse to participate in the type of stereotypes many people have moved on from, and I was glad to leave that level behind.

Harry and Judy have different abilities, and in single-player you can switch between the two easily to maneuverer the top-down map. If an enemy hits you, you die immediately and get reset back to the nearest checkpoint to try it again, although dying a lot of times will lower your rating at the end in the Devil-May-Cry-like style ratings.

There are tons of different weapons and magical abilities to get you in and out of combat in a flash. Some take more finesse than others, and they can all be used to incite violence in a variety of fun ways. The leveling up system ensures that you get enough new tricks that things never get old, and it’s always great to discover a new strategy when you think you’ve got it all figured out. 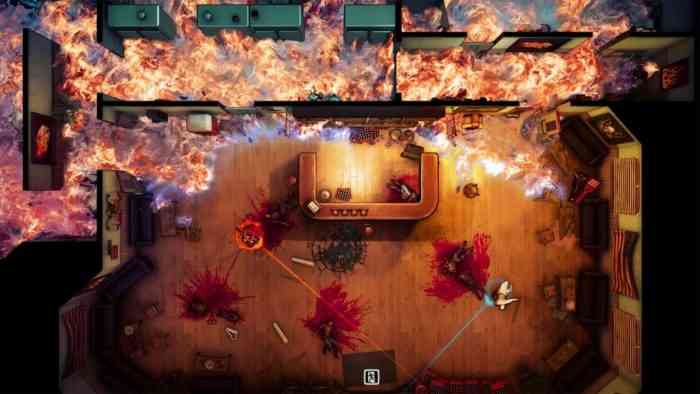 Sometimes I found the game immensely frustrating, but it was in that rarest of ways: because it’s challenging, not because it’s unbalanced or poorly made. Usually, I fixed the issue by actually using a brain cell or two in my strategy and switching weapons or powers, and once or twice I was willing to die over and over because I knew I was just one right button away from doing something indescribably cool.

Harry was, for me personally, a lot more manageable to play than Judy, and I solved several difficult fights simply by switching to him. I would have played him almost exclusively, but in single player only the character you’re currently playing as levels up when you kill people, which was a frustrating mechanic, forcing me to play as Judy for entire levels to play catchup.

I wasn’t able to play the game in co-op (for a sign of how often I play games with people, I only own one Xbox One controller), so my experience was solely multiplayer. I thought the game worked well alone, and I enjoyed booting it up to spend an hour or so hacking and slashing with Harry and Judy at a time.

The only time I became cognizant of the lack of a second time was when fighting a giant worm with time mechanics—I clearly remember thinking “this is probably a lot more fun with a second person.” To think that only one time, though, is an achievement in itself.

God’s Trigger was a blast to play. It is a gritty bloodbath that had fun with the tropes it played with and never sacrificed story or gameplay for its component parts. Harry and Judy made a great team in a corrupt world, and killing sinners, whether they’re cowboy body doubles or deranged cultists, has never felt so good.