While every Soulslike is, at its core, a Metroidvania, not every Metroidvania is a Soulslike. Thank goodness. So many games are bland photocopies of From Software’s formula that it’s nice to play a well-made Metroidvania that embraces more traditional mechanics. Ghost Song does nothing revolutionary, but in a way it stands out for what it isn’t. Not a Soulsborne clone, and not a roguelike.

A 2D action game, Ghost Song takes place mostly underground, in a series of labyrinthine caves and tunnels on the planet Lorian V. Occasionally, the action shifts to the surface. Lorian is a colorful place and even deep underground, the palette is muted blues, pinks, purples, and greens. Although there are subsurface labs and other structures, Ghost Song’s haunted environments are alive with extraterrestrial plants, bugs, and organic enemies. Overall, the game’s art design is beautiful and distinctive, if ever so slightly repetitious.

You play as a Deadsuit, a cyborg of sorts, already armed with a deadly blaster and some basic melee skills. Your task is to explore and piece together memories and explanations of how and why you came to find yourself on Lorian V. Let’s be honest. Narrative aside, your real job is survival and killing just about everything that moves before it can kill you. Or at least send you back to the last checkpoint. Occasional voiced NPCs help fill in the gaps of your memory (and maybe sell you stuff, too). Ghost Song has a perfectly serviceable narrative, but the focus is on action. 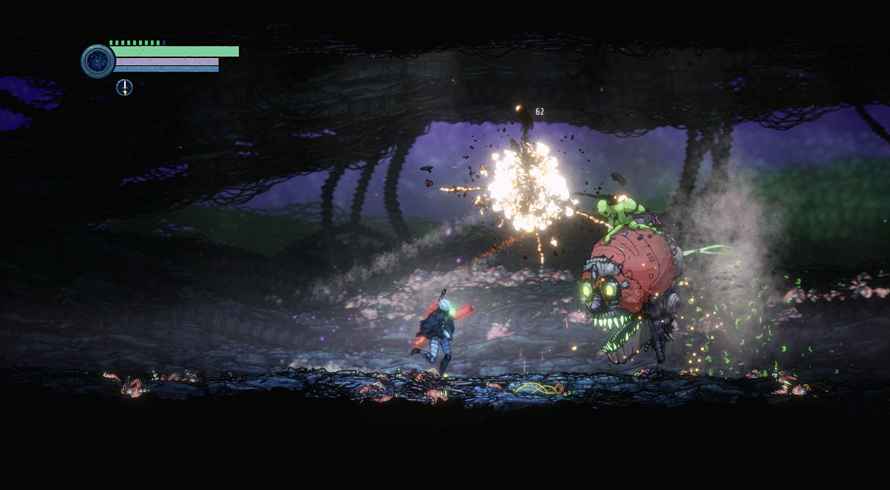 Hit Me Just One More Time

Some Metroidvanias clutter the essential experience with layers of mechanics, but Ghost Song chooses to simplify. It’s not a game that requires much of a tutorial. You have a ranged weapon, and you can melee. You have health and stamina, and the ability to heal. Nanogel is absorbed from killing organic life, and while Ghost Song isn’t a looter-shooter, there are treasures to pick up along the way. You have three attributes that you can spend your hard-earned nanogel on: vigor, resolve and gun power. Of course, these three major stats impact a number of other sub-traits and abilities.

While exploring, you’ll pick up modules that can be applied to your character to impact performance. You’ll also collect weapon modules that transform your basic, unlimited-ammo blaster into a wide range of weapons, like the ability to fire charged elemental pulses. While the basic gun never runs out of charges, the more powerful weapons do. Especially with the character modules, there is a risk/reward element. One module might increase vigor, at the expense of taking more damage, for example. You’ll also pick up consumables and nanogel while exploring and defeating bosses. In addition to the dozens of weapon and character modules, Ghost Song adds a few other mechanics to change up combat. For example, when your blaster glows red, you do more damage in melee combat. 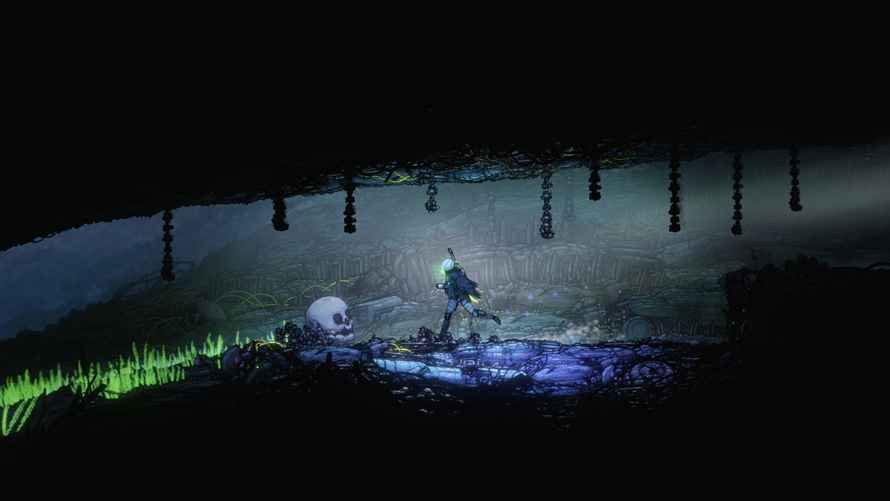 It takes some time before your character gains the ability to double jump, heal, sprint/dodge, and generally move through the often claustrophobic passages within the facility. Like with any Metroidvania, the first hours are a challenge because the player is weak and underequipped. Happily, characters don’t lose all their currency upon death, so it’s still possible to incrementally improve stats even when dying a lot. However, save points are relatively widely spread, so a corpse run past respawned enemies feels plenty tense. There’s no difficulty slider, but Ghost Song does a good job of balancing progress with challenge.

The Long and Winding Road

Level design in Ghost Song is a typical 2D maze of tunnels, platforms, hidden side paths and breakable walls, with some areas cut off until the player has additional abilities. Platforming is forgiving enough to not be frustrating. Occasionally, the camera and level design get in the way of seeing the edges of the area, resulting in death by an enemy/camera combo. But in general — and this is the most important part — combat is fun, and while the enemy types are a bit limited, the mini-bosses and main bosses are inventive and interesting to fight. The flow of ranged weapons and their variations morphing back and forth into and from melee combat is excellent.

Ghost Song has a very understated musical score, mostly consisting of spare, almost ambient guitar. It lends a lonely, eerie and desolate vibe to the world. Sound design overall is quite good. The squishy organic sounds combine with inventive enemy noises. There’s a lot of detail in audio processing to suggest various surfaces and spaces. 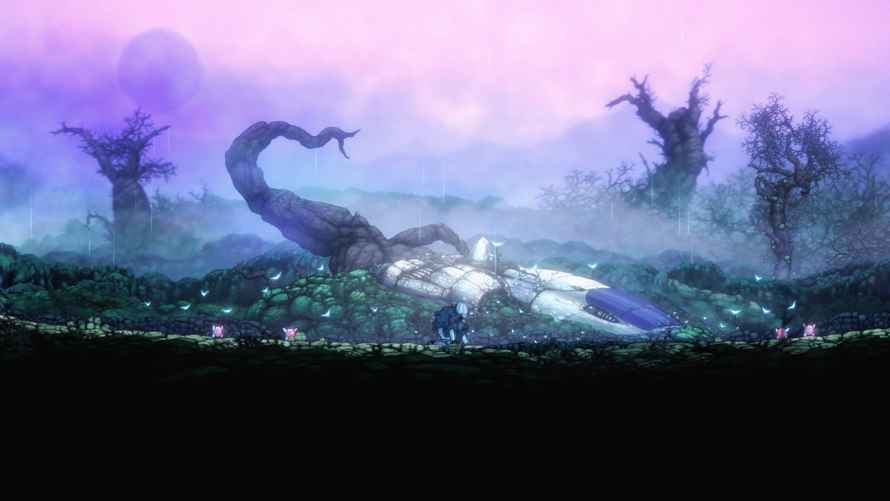 Ghost Song doesn’t try to reinvent the Metroidvania genre, but neither does it clutter it up with extra mechanics for the sake of complexity. It’s approachable but challenging. What it lacks in originality is made up for by attractive art, good level design and overall, addictive fun.

Wo Long: Fallen Dynasty is Ready to Rise Up
Next Call of Duty: Modern Warfare II Review – Something To Believe In
Previous Resident Evil Village: Winter’s Expansion Review – A Short Scare