It’s said that the essence of creativity is taking old ideas and rearranging them into something new. That’s certainly true when it comes to narratives. There are only so many ways to spin a yarn. The hero’s journey was probably already old news when Homer–the Greek, not the Simpson–wrote the Odyssey. That brings us to Forspoken. Is this action game and fish-out-of-water tale a creative take on familiar themes or a retread of worn-out mechanics?

There has been a lot of confused marketing around Luminous Productions’ Forspoken. The recent demo largely ignored the story and highlighted the open-world action, making the game feel almost like a spell-focused Soulslike. In fact, Forspoken’s narrative is at least as prominent as its combat. There are many times when Forspoken becomes a lengthy, passive parade of cutscenes and exposition.

I love magical realism, a genre where everyday life mixes with magic. Forspoken flips the script. It’s the story of a magic-infused land disrupted by a visitor from real-world New York. You play as orphan Frey Holland–named after the tunnel, get it?–a streetwise young woman from the Big Apple. Frey is one felony rap away from incarceration and hiding from a gang of car-jacking thugs. When said thugs torch her threadbare apartment while Frey and her cat sleep, she escapes and finds herself homeless on the mean streets of the city. At her lowest, she stumbles on a glittering bracelet. When she puts it on, something magical happens. A portal to another world opens, and Frey stumbles through. 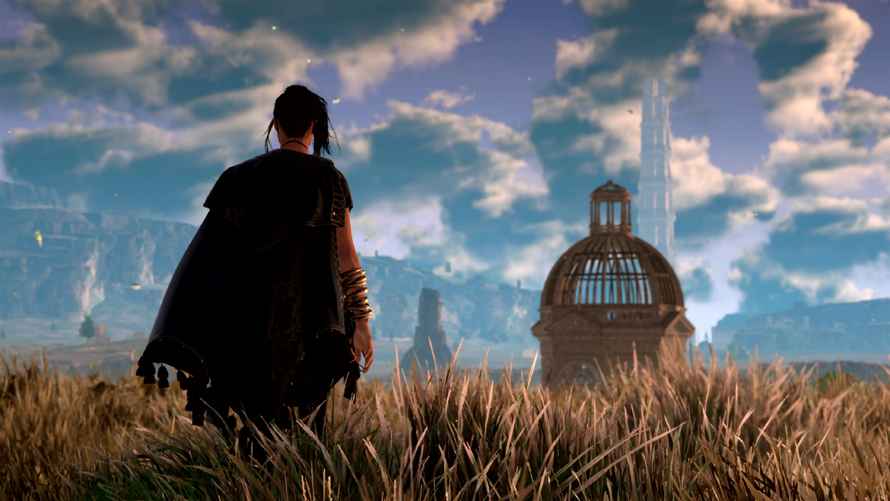 Frey finds herself in Athia, a verdant landscape filled with vaguely Greco-Roman ruins and corrupted-looking animals and monsters. Her bracelet has become a sentient chatterbox with an ironic sense of humor and a British accent. She nicknames her wrist-bound companion Cuff. Cuff helps guide Frey towards the next destination and fills in some needed exposition. He gives Frey someone to talk to, and talk they do. Cuff also becomes an ally in combat, as he has a suite of defensive magic abilities. Unlike God of War’s Mimir, conversation with Cuff can at least be dialed down from incessant to just-the-facts.

Once Frey reaches the capital of Cipal, the story kicks into high gear. She learns that once-idyllic Athia was ruled by four powerful but benevolent matriarchs called the Tanta. A mysterious magical apocalypse called the Break corrupted the four regions of Athia and maddened the Tanta as well. Because she is immune to the Break’s effects, Frey is the perfect candidate to defeat the despotic Tantas and restore the land. And in doing so, she may find a way home to New York. It’s probably no surprise that to many Athians she’s a savior, while to others, she’s evil incarnate.

There are a lot of action games with minimal stories, but Forspoken sure isn’t one of them. A number of seasoned writers worked on the game, and it’s clear that the developers wanted to tell a rich and engaging story. One of Forspoken’s narrative problems is that Frey and the player almost never get to discover anything on their own. Cuff or one of the game’s many NPCs are constantly telling her what to do, where to go, and why she has to do it. It’s the polar opposite of Elden Ring, which has a complex narrative that has to be uncovered beat by beat. This sometimes slows the pace. The exposition dumps also make Frey feel less like a strong, conflicted hero and more like a passive puppet. The “unwilling hero” theme is a good one, but Frey rarely resists her fate.

To be fair, God of War Ragnarok and some other recent RPGs have had a problem with story bloat. Forspoken also has an issue with keeping a consistent tone. Frey is a foul-mouthed, streetwise young woman from contemporary America thrust into a corrupted fairy tale land of polite British accents. That’s well and good. What doesn’t sit quite as naturally is the game’s humor. It doesn’t always mix well with the game’s otherwise serious and dramatic premise. Actually, the more serious elements generate some pretty cringe-worthy dialogue as well. While there are a few interesting NPCs, there are just as many burdened with being mawkish cliches.

What About the Action Part?

In between the clusters of cut scenes and extended exposition, Frey and Cuff explore Athia and fight its many Break-corrupted monsters. Combat is definitely where Forspoken engages the player most successfully. Here, too, there are lots of systems and subsystems at play. But ultimately they’re re-dressed versions of those in other action games. Sometimes it feels like there are glimmers of good ideas that never quite made it out of the oven. 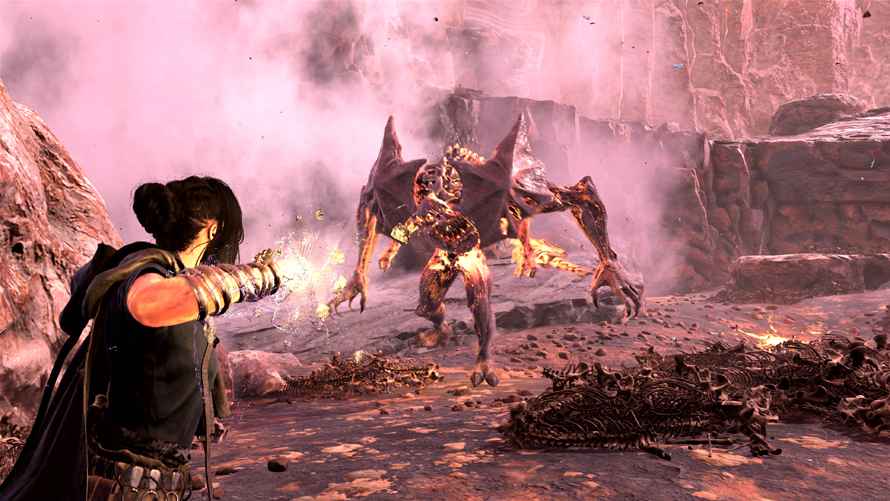 Forspoken has no melee weapons, at least for many hours into the game. Instead, Frey relies almost entirely on magic. Over the course of Forspoken, Frey unlocks a wide and useful variety of spells, elemental attacks, and various defensive magic abilities in concert with Cuff. Many of these have been seen in other games–such as Soulslikes–and a few are melee weapons or shields in magic disguise. Most of them are fun to use, with brilliant particle effects and a punchy weight. Some are keys that fit a specific enemy type’s weakness, but many are generally effective against a range of monsters.

Where combat falters is in the UI. It’s overly complex and unintuitive. A good UI disappears into the flow of action. Forspoken’s radial menus and button mapping too often insert themselves.

Frey moves fluidly, and paired with her spells is her magic parkour, allowing her to scale vertical surfaces, move with bursts of speed and evade enemies in style. Later in the game, she obtains a grappling hook, which encourages revisiting zones to explore previously inaccessible areas. The problem is, most of the environments are pretty but also pretty barren. A largely empty open world filled with ruins and the occasional corrupted enemy might be keeping with the lore, but it doesn’t always make for fun exploration. There are the usual side quests and hidden areas off the main path, but I found myself most often heading to the next main quest objective as efficiently as possible.

Aside from combat, exploring the world allows Frey to harvest materials needed to craft consumables, find treasure, and upgrade her equipment, which in turn boosts her magic. Frey crafts her gear at campfires or fast-travel refuges, which are relatively plentiful. There are a number of other systems to discover, slowly dribbled out during many hours of play. This includes Frey’s magical fingernail polish with magical runes stolen from the Tantas and mysterious pools of energy that unlock new spells. None of Forspoken’s systems are particularly complex, and collectively they can feel like slightly cumbersome holdovers from an older generation of RPGs.

Visually, Forspoken is a mixed success. The ray-traced world can be beautiful and evocative, and some of the NPCs are memorable. There are also vast areas of uninteresting barren rock and some pretty awful character faces and unconvincing animations. The same is true of the game’s enemies, which range from humanoids to corrupted animals, mythic creatures, supernatural monsters, and bosses. The art and architecture draw on a catalog of world cultures, and some of the designs for the Tantas and ruling class are striking.

Superstar composers Bear McCreary and Garry Schyman have contributed a score that–for them, anyway–is surprisingly unmemorable. It is also unrelenting as if the developers were deathly afraid of silence. The transitions between exploration and battle music are awkward and abrupt. The game’s voice acting is good, often better than the lines the actors are given. Aside from Frey’s spells, environmental audio is very sparse, making the already empty areas feel even more incomplete. 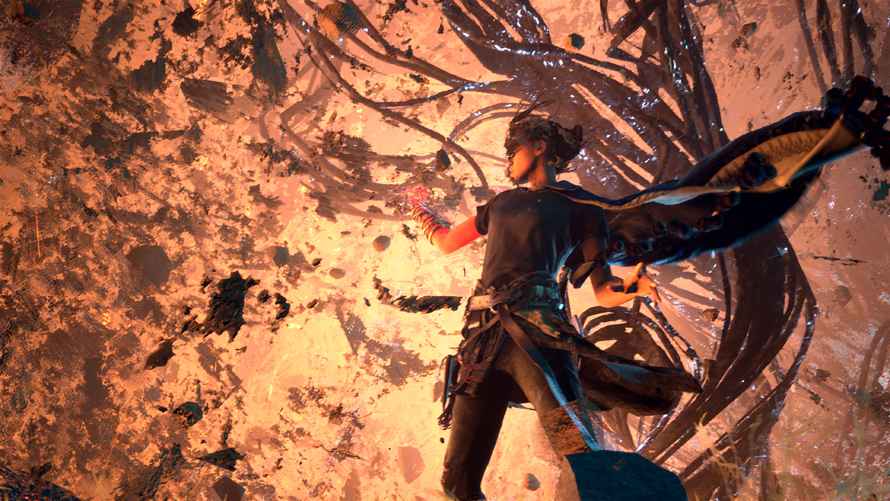 On the PS5, there are the usual options to select between performance, ray-traced fidelity and a balanced compromise. There are also lots of welcome quality of life, accessibility, and difficulty options. There are reports of Forsaken being buggy, unoptimized and on PC, it requires absurdly high-end hardware. I didn’t have huge issues on the console version, but PC players should take note.

Forspoken feels like a test that was turned in with answers missing, returned with a big red “Finish Your Work” inked at the top. So much of the game feels like unrealized potential, a big, messy first draft. There are too many mechanics, there’s too much story, too much empty world, and too little chance for surprise or discovery. However, I can’t say I didn’t enjoy a lot of my time with Forspoken. When the combat clicks, it can be a lot of fun. Forspoken is ambitious, and there are hints of a winning formula. I hope the developers keep chipping away at what doesn’t work. It would be a shame if Forspoken is forsaken. 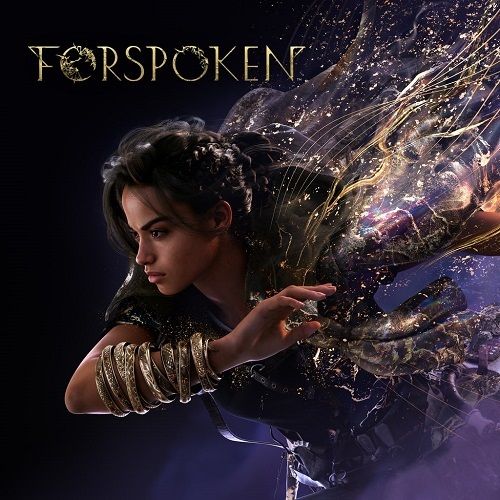