As a long lover of FIFA games I’d always wanted to try my hands at Football Manager. I’d hear my friends tell their own stories of coaching a small town team and leading them all the way to stardom. Through blood, sweat, and tears they’d do the impossible and bring the underdogs to the top, and the happiness they felt was almost palpable. But, as always, the question on everybody’s lips is whether or not this game has improved enough upon its previous installment to justify a purchase.

The game starts you off with a choice of managerial positions to choose from, all of which depend on your play style and how much involvement you actually want in the club. Once you’ve chosen that you’re swiftly dropped into your club’s home screen. Here you’re introduced to all the tools required to ensure your success as a manager, such as training routines, fitness levels, scouting out new players, and keeping track of your finances.

Though there isn’t a tutorial to teach you the ropes one by one, there are tiny bubbles that will help you learn all you need to know about the mechanics and tools. The amount of depth to Football Manager is staggering, and it is very easy to lose yourself as you meticulously plan out improvements for each player on your team. The godsend that is the assistant manager will organize most everything you need to do and will make the overwhelming start seem much less daunting.

“Despite their infamous reputation of loss after loss, I thought I’d give it a shot and see if my own underdogs could reign supreme under my iron rule.”

As there isn’t any kind of set story to follow, I decided to add a bit of a narrative to my gameplay and chose to coach my local football team. Despite their infamous reputation of loss after loss, I thought I’d give it a shot and see if my own underdogs could reign supreme under my iron rule.

I started well: my pre-season matches set the bar high with several wins, I snagged a few low-key stars in the transfers, and eventually secured a strong lead in the league tables. It was all sunshine and rainbows until I was hit where it hurt most, my one-man-army of a striker fell victim to a horrendous tackle. He was out for the remainder of the current season and the start of the next.

The team carried on but the absence of our rising star proved to be too great, and we soon wound up stuck in the middle of the league table; which was still an improvement, mind. It seems as though my team definitely have the means to get promoted, but they first need a competent manager to lead them. 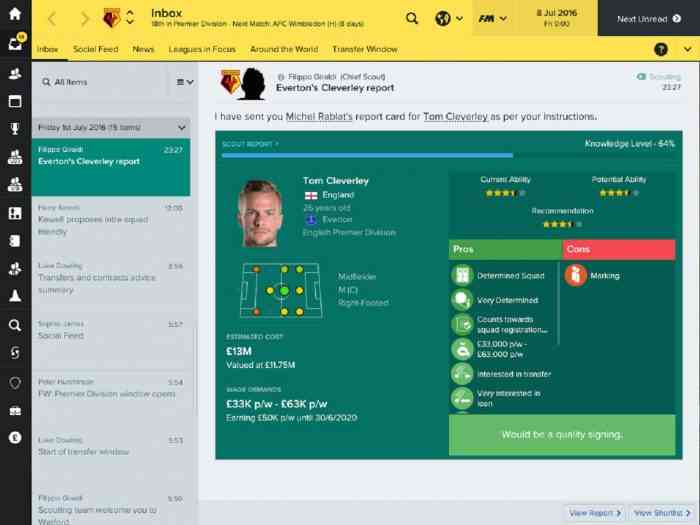 There are several new features added into 2017, but some come off as meaningless and fall short of improving the game from its predecessor. A change my friends and I enjoyed was the change to the user interface. For example, in previous installments, answering an email could end with a long chain of menus to close in order to get back to your inbox. This has been corrected.

My two biggest issues are with the social feed and the ability to scan your face onto your manager. Despite having good intentions, the social feed ended up being nothing more than an inconvenience and reminded me of the god-awful Twitter parody in Cities: Skylines, whereas the face scanning seemed pointless and only served to remind me why I avoid having my photo taken.

“Despite the new changes on pitch, it seems that off of it there are still quite a few problems.”

A game such as Football Manager is completely dependent on AI, so if there were any slip ups or errors they would be felt tenfold and have a drastic impact on the gameplay. The improvements made to the game’s engine have had some noticeable effects on the pitch, managing to cut back, if not completely fix, the amount of times a player acts in a way you didn’t ask of them; i.e. when a player hoofs it off the pitch for no reason.

Despite the new changes on pitch, it seems that off of it there are still quite a few problems. During my many conference talks I noticed that the same question would be asked by two different journalists, whereas other questions would quickly get repetitive and leave me using the same answer I’d used last time. 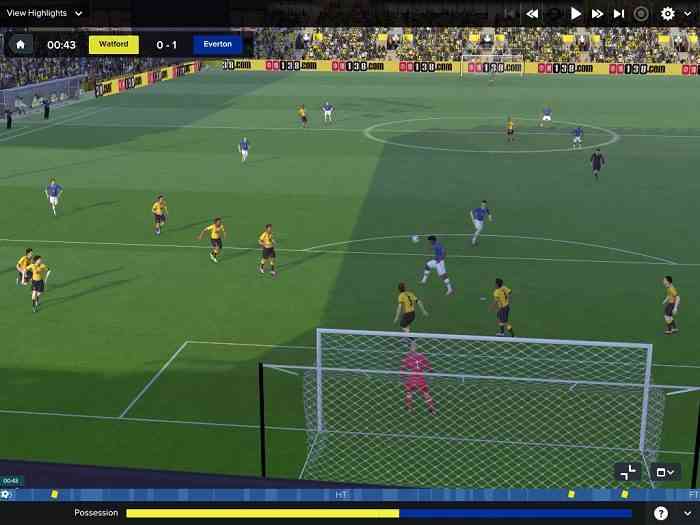 Having compared the previous Football Manager to this one, there are some noticeable changes to aesthetics, such as a livelier audience, individual player animations, and something as subtle as the referee marking where the ball should be placed for a free-kick. All of these changes are ones that create the atmosphere of watching an actual football game. It was easy for me to sit back and watch the events unfold, only chiming in when I felt like some divine intervention was needed.

As it stands, fairly little has been added this year, but the developers did fix a number of previous issues. Long-time fans of the series will probably still pick up the game for roster updates, but casual players may be hesitant to pick up 2017 as I don’t believe the changes are great enough to warrant another purchase. 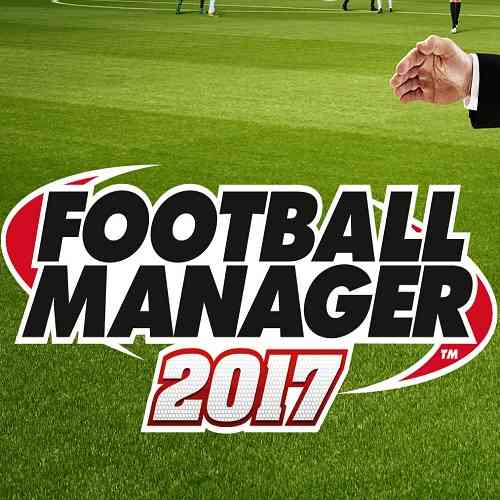