In Flashback you play as a character named Conrad who awakes on the moon Titan and must piece together pieces of his memory and past. You turn out to be a government agent and ultimately work to uncover and thwart an alien threat. I’m not sure if the original Total Recall movie was inspiration for the game’s premise but it certainly feels like it. Flashback is primarily story-driven. Its linear path is broken up with various action, platforming and puzzle solving elements. Each of these elements is very elementary compared to what other like games offer today. 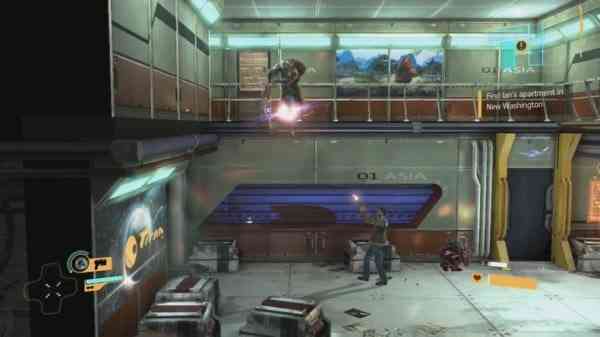 The immediate and obvious comparison here is to Shadow Complex. Unfortunately for Flashback these comparisons aren’t all that favorable, even more so considering Shadow Complex is now four years old. Both games have a nearly identical presentation but, while Shadow Complex feigns game play in the third dimension, Flashback remains strictly along the 2D plane. Yes, it is a nod to the original but it may come across as somewhat elementary for today’s seasoned gamers.

As you play through Flashback, XP are earned that can be applied to a limited number of characteristics such as accuracy, damage and health. It doesn’t get overly deep. This may be ok for the casual player playing for nostalgia’s sake but seasoned players are going to see this element as thin. The same extends to the weapon power ups.  I found them often unnecessary to be successful in combat. For example, in the same amount of time it takes to charge up a heavy shot enemies can be disposed of with a series of rapid, normal shots. They are most helpful for advancing further in the game from an exploratory sense.

Most damning is that Flashback is held back by a number of technical glitches. These may literally force whoever is playing to have to restart entire levels. Can you say frustration? It happened to me on more than one occasion. One example was an elevator that simply would not go down past a certain point preventing access to a part of a level I needed to go. In some weird series of events, going up the elevator glitched me out of it and down to where I needed to be. Problem solved, right? Nope. When I returned to the area later the elevator was stuck where I couldn’t reach it. My progress in that level was completely stalled and I had to restart from scratch. Not my idea of fun at all. 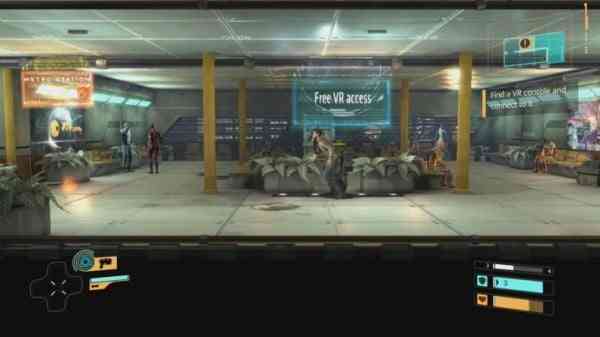 At the time, the fluidity of the original Flashback’s animations was impressive. Vectorcell has done a good job in being faithful to that but this fluidity doesn’t necessarily translate into precise control. I just can’t shake that feeling that main character Conrad is an un-apologetic clone of Nathan Drake. The presentation of levels in three dimensions is purely artistic. Even though you cannot interact with the hallways or people that may be in the foreground, I found this to subtle, nice touch.

A good soundtrack and more than capable sound effects get completely overshadowed by ridiculous quotes and voice acting. Quips like “let’s party” and “awesomesauce” are unnecessary and completely ruin the vibe along with the poor quality of voice acting for Conrad. The soundtrack has a techno/synth edge to it which gives off a cool 80’s vibe. Musical cues give away the presence of enemies which  is actually a good thing because you are often engaged before making visual contact on screen (not a glitch but it can be frustrating to be attacked by something you can’t see.

As much as it was an enjoyable exercise in nostalgia, compared to the standards set by today’s games Flashback falls short. The bottom line is this game borders on being technically flawed. Story doesn’t make up for this or the shortcomings of elementary gameplay. If you are looking for a 2D action game like this you are better served to check out Shadow Complex.