Earlier this year I was lucky enough to review the Mad Catz F.R.E.Q. 5 headset for your PC or Mac.  At the time, I was impressed with them as they had a slick look, they were durable suckers and on top of that they sounded great.  The only problem with them was the fact they only delivered stereo sound.  Oh and yes there was just one other pesky issue with them – the price.  They cost around 160 bucks and for a stereo only headset that is a lot of cake.  Coming in at around $139.99 (Canadian), the Tritton Pro+ PC Headset arrives for PC and Mac.  It features 5.1 Surround Sound and is a bit cheaper than the F.R.E.Q. 5.  For the past couple of weeks, I had a chance to sink my teeth into them and in the end I left recommending this headset for any PC or Mac gamers in the market for a new headset.

The first thing I noticed when I unboxed the set was how everything was neatly organized.  You have everything you need right out of the box including a handy little set up chart.  The guide doesn’t go into any great detail but you can go online to get the full user guide.  This was somewhat of an annoyance as I was curious if the manual addressed a slight feedback issue I was having with the set; however, accessing the online pdf file, the manual did not address the issue I was having.  Regardless, it would have been nice if a detailed manual was included right out of the box.  I know we are all trying to save trees but I guess I am just old school like that.  In addition to the quick set up guide, out of the box you get a detachable microphone, 5.1 analog audio adapter and the in-line audio controller which is already attached to the headset. That is about it. 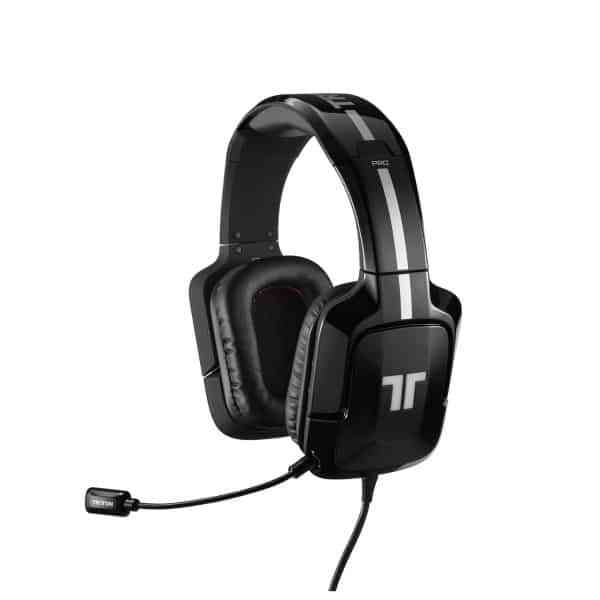 Setting up the headset was very easy.  The only difficulty I encountered was trying to figure out which 3.5 mm connector went where.  To set it up I simply plugged the USB connector into an available USB port, then connected the connect the pink, orange, black, and green 3.5mm connectors to my PC soundcard  and I made sure the PC adapter was secured to end of headset cable.  After I plugged it all in, my PC audio manager appeared on screen and it is here where I set my speaker configuration to 5.1.  Soon after, I performed a little sound test and then I was good to go.  Easy peasy!

The headset itself is good quality as well.  The pair we were given to review were black with a grey stripe on the chassis. The traditional Tritton symbol is emblazoned on the speaker cups and light up when plugged into your PC.  I must admit it looks sharp all lit up.  Needless to say, they are good looking cans and not an eye sore at all.

One thing I have always been impressed with when using any Tritton headset is the comfort and the Pro + is no different.  From the foam padding around the speaker cups to the foam padding under the chassis, the Tritton Pro+ PC Headset are comfortable to wear even for extended gaming sessions.  Granted if it’s a little warm out my ears and head do sweat when wearing them. The cans fit a little snug so you may perspire a little; however, they block out the sound magnificently so you are making a bit of trade off here.

The Pro+ headset has a detachable noise cancelling mic which is flexible and can bend in any position you desire.  As far as the clarity of the mic is concerned, I encountered no issues.  Voices came through crystal clear.  I found that the mic didn’t completely cancel out all the background noise but certainly did a much better job than some of my other higher end headphones.  I should also mention alongside the in-line remote there is a Selectable Voice Monitoring (SVM) system which allows you to choose if you want to hear your own voice in the headset.  A nice little option indeed. 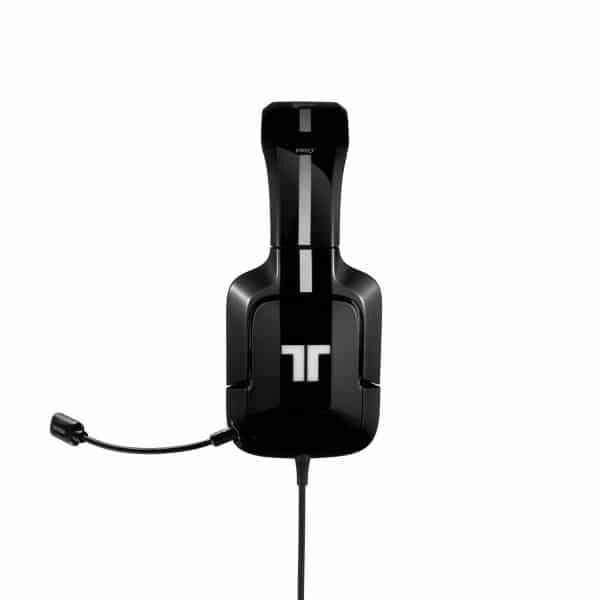 One of the more unique features of the Pro+ is its claim of being a true 5.1 Dolby Digital Surround Sound headset.  Where this headset differs from other headsets is that there are four individual speakers in each speaker cup.  There is one speaker for the front channel, one speaker for the center channel, one speaker for the rear channel, and a larger speaker for the subwoofer.  It is pretty cool technology with the way Tritton was able to squeeze four separate and powerful Neodymium speakers in each ear cup. You can adjust each speaker as well with the attached in-line controller which displays front, rear, center, and sub.  The controller itself is a little on the heavy side but has a nice little clip so you can attach it to your belt or shirt.

So how does the Pro+ PC headset sound?  Well much better than I anticipated.  My eardrums rattled as the bass boomed from the headset.  I know you have heard us say this multiple times in the past with Tritton headsets but I have say the Pro + really delivered in the sound department.  Anyone who tries this headset will readily notice the bass but others will also notice the crisp highs.  The headset packs a punch delivering fantastic sound! Every little sound is noticeable in game and even when playing music the headset sounds are robust and feature a wide dynamic range.  Does it make your gaming experience much more immersive?  You better believe it does.  It many ways it beats my home theater set up as I can really crank up the headphones without waking up the entire neighborhood.

Overall, the TRITTON Pro+ PC Headset is a solid purchase if you are in the market for an affordable 5.1 Surround Sound headset for your PC or Mac.  If you have a sound card that is capable of taking full advantage of the Pro + technology then this headset is in many regards a ‘no-brainer’.   Granted they are wired and you can’t use them for your consoles; however, if you are looking for something that delivers highly accurate sound separation which is ideal for online gaming look no further. 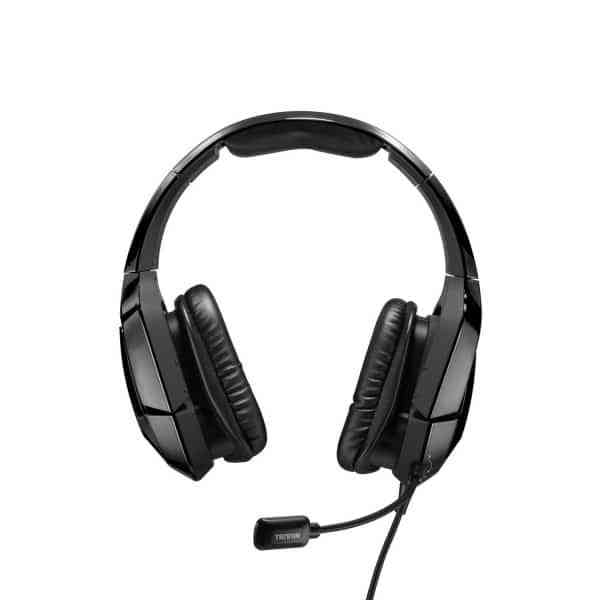 Next Flashback (XBLA) Review – Some Things Belong and Should Stay in the Past
Previous Race the Sun (PC) Review – It’s Fast, Hard and Super Addictive!