I guarantee if you want to start some heated arguments with your videogaming friends, simply state with absolute certainty that Final Fantasy *insert any number here* is the best one in the series. Without a doubt someone will disagree and you’ll go back and forth about why almost every single one was the best in its own way. With that in mind, on today’s agenda we have the long awaited PC port of Final Fantasy V (FFV from here on), a game that is over twenty years old. So the big question is: was the wait worth it? The answer lies, oddly enough, somewhere in the middle of yes and no.

I have to make a confession, while I have played FFV a long time ago I never finished it, which is why I jumped on the chance to go through it again without having to dig out my old hardware and probably pay an exorbitant price on Ebay for a copy. If you’re like me, or have never played any of the previous ports, then you’re in for an adventure.

FFV’s plot revolves around a party of four heroes, Bartz, Lenna, Faris, and Galuf, who are driven together by circumstance and fate. Now, since FFV released so long ago its main storyline includes overused tropes such as a handful of crystals that keep peace and balance in the world, multiple bouts of amnesia, and a villain that wants to consume the world. While these stereotypes weren’t necessarily overused 20 years ago, there have been countless games since then that have used many of these plot lines, so FFV’s plot may feel a little overdone due to other games having the same premise over the past 20 years. Magic crystals begin to shatter one by one and it’s up to you and your party to figure out not only why, but how to stop it from happening so that you can also stop the antagonist. I don’t want to give much more away, but it’s a surprisingly dark storyline that when all of the facts are laid out for you to see, you might just change your initial view of the bad guy by the end. 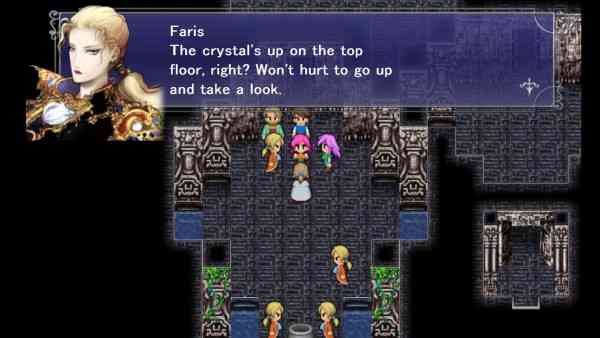 FFV originally released on the Famicom / SNES, so if you’ve played any of the older Final Fantasy games, pre FFVII, then you’ll know exactly what to expect graphically. It’s played from the classical top down perspective, has a world map that can be traversed by Chocobo, Airship, and more, battles occur randomly as you walk, and you’ll need to purchase items, armour, weapons, and spells at towns before you rest at an Inn for the night to replenish your HP and MP.

As you defeat enemies you’ll earn traditional experience points that go towards levelling your characters up making them stronger, you’ll also earn a secondary form of XP that goes towards levelling your current job, which I’ll get into shortly. FFV wasn’t the first game an Active Time Battle (ATB) system, where time doesn’t stop for enemies and players and you need to wait until your ATB meter is full for your turn to attack. As far as I know though, I believe it was one of the first that actually allowed you to see the ATB meter fill up so that you were able to determine exactly who’s turn was going to be next (from your party, not the enemy). Not a huge deal these days, but 20 years ago it sure was.

While some may love the characters or the story, I believe the true gem of FFV is its amazing job / ability system. With over 20 jobs to learn as you progress, you are able to effectively multi-class your characters for the exact type of character and group you want to play. It’s surprisingly simple too; as you earn AP (the job’s form of experience) you eventually level up your jobs, and as you do so you unlock specific abilities from said jobs. When you switch to another main job you’re able to carry over one ability (eventually two) from any other job that character has unlocked, allowing you to essentially have the best of both worlds based on how you want to create that character’s abilities.

“Instead of playing a great PC port of the game, it more feels like a sloppy RPG Maker remake by an amateur that doesn’t even use an eye friendly font to boot.”

As you progress through the story you unlock more jobs, and because of how close they level up it can feel a little daunting at first, but once you figure out which ones work best with one another and who suits what job best, it’s an enjoyable mechanic to play around and experiment with. After FFV it wasn’t until Tactics that the job system made its triumphant return, and only a handful of Final Fantasy games have utilized it since then. If it’s foreign to you make sure to delve into the deep customization, as it’s arguably the best thing about the title.

So what’s new in the long awaited Steam release of FFV? Well, let’s start with the good. All of the extra features such as the Necromancer class, extra dungeon, and more are all included in this version, as are updated controls and options to make gameplay smoother overall. Controls feel fine, and the ability to walk diagonally is new, though it simply feels ‘off’ and a bit strange to an old school gamer like myself where you could only move in the normal four directions.

Now we get to the laundry list of issues that plague this release. Simply put, this is just a port of the tablet/iOS version onto PC, and an embarrassing one at that. While it should be noted that master character designer Kazuko Shibuya returned to redo the character’s graphics, the fact that they aren’t pixelated sprites anymore makes them feel incredibly out of place given the backgrounds. Also, the sprites themselves don’t match the artwork of the character version in the dialogue window. For example, every single character has one hair colour in game and a different one in the dialogue window. Not a deal breaker by any means, but a small detail that is infuriating, and will especially be for newcomers to the game. It just makes for a jarring experience seeing beautiful portraits that don’t match the in game designs. (Pro-Tip: Someone made a mod that you can find on the associated steam page that fixes this oversight) 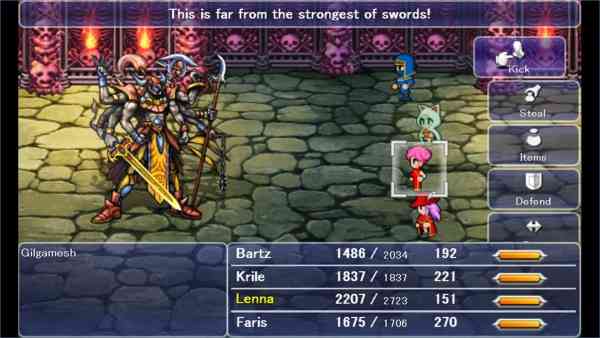 The most embarrassing injustice for this shoddy port though is something you’ll see from the very first cutscene until the credits. The world itself is clearly made from blocks as you’re able to actually see each individual block edge. Normally games from this era are built this way, but the artwork is done in a manner where you don’t notice that it’s simply blocks laid down beside one another as they blend together. If you played the original, or even the GBA version, you didn’t see these block seams, so I’m not sure what happened in the porting process, but it looks bad. You can see the edge of every block and because they don’t flow together it really interrupts your immersion, no matter how hard you try to ignore it. Some scenes aren’t too bad, but there are others, like the meteor scene early on, that look absolutely atrocious.

If you want to play FFV on your PC without emulation, this version will obviously do the trick; it’s simply just a very terrible mobile port that appears to have been given a full screen mode to work on PC without any extra work or quality assurance at all. Instead of playing a great PC port of the game, it more feels like a sloppy RPG Maker remake by an amateur that doesn’t even use an eye friendly font to boot. It’s a bit of a conundrum, as the game itself is fantastic and I would recommend it any day of the week due to its great storytelling, characters, and old school 90’s JRPG vibe. The gameplay stands up even after two decades and I really enjoyed finally going through it, something I should have done when I was a teenager. FFV is a great way to look back at Square’s roots and how great JRPG’s were back in those days before everything was FMV’s and voice acted.

That being said, the scoring for this game is strictly based on this particular ported version. It’s obvious this it was pulled from a mobile or tablet version and simply upscaled. In doing so, Square Enix has made such a beautiful looking world look atrocious. The fact that this PC version is a massive downgrade from the original, or any previous version to be honest, speaks volumes. As a fan of RPG’s I whole heartedly recommend FFV, just make sure you play any other version than this embarrassing PC port.

– Lazy port from mobile
– Visuals are a mess 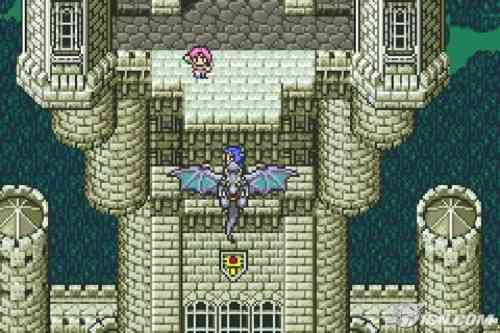 Voice of Cards: The Beasts of Burden Review – Not a Burden at All
Next Rock Band 4 Review – Get the Band Back Together for an Evolution of the Franchise
Previous Velocibox Review – Disorienting Camera & Learning Curve Doesn’t Dampen Experience