Last year I considered FIFA Soccer 12 to be by far one of the best virtual representations of the sport of soccer (football to the Europeans reading this) that I have ever played as it managed to address the issues from previous FIFA games and deliver an outstanding soccer game that just felt so right.  I wasn’t the only one that felt this way as the game generated some great review scores across the globe to go along with some strong sales.  Naturally this leads me to ask the question: how in the blue hell could FIFA Soccer 13 be any better than FIFA 12 which sold over 10 million copies in a 4-month span last year?  Well after some extended playtime on the FIFA 13 soccer pitch I think it’s safe to say the development team has effectively pushed the franchise forward closer into the realm of virtual soccer perfection.

Okay, let’s get something out of the way right off the hop.  FIFA 13 still plays very much like last year’s game, but let’s face it this is nothing new for EA Sports games.  Much like the Madden and NHL development teams, the FIFA team clearly took the “if it ain’t broke then don’t fix it” approach this time around.  Yet this is not a bad thing as this makes for a game that even those remotely familiar with the franchise will easily be able to pick up.  This year’s entry into the yearly franchise is all about refining an already solid FIFA experience.  FIFA 13’s marketing tag line this year is “A Revolution of Game-Changing Features”.  This sounds somewhat ambitious and in reality it is anything but; however, again this is not a bad thing as the team decided to focus on some main areas in an effort to add more realism, more intelligent AI (your own team and your opponents), and add a few more features that in the end make the overall experience a little more authentic and true to life.  So what is the end result?  A game that feels more polished and a little more “predictably unpredictable”.

Without wasting too much time on features that really don’t impact the on field experience, or rehasing features that have been around for years, I will highlight some of the new additions that actually have a bearing the gameplay.  The first noticeable addition has to be the “Player Impact Engine”.  During my first game I noticed right away how collisions and defending or attacking AI players seem much more realistic.  I found I could use my player’s size and physicality to my advantage when battling to win back player possession.  There is also more of a feeling of ‘push & pull’ when battling for position.  Players seem to react appropriately and authentically and you won’t be seeing much, if any, of those crazy collisions that made it to YouTube in FIFA 12.  Bottom line, player’s bodies react as they should and the result is a game that feels much more fluid and natural. 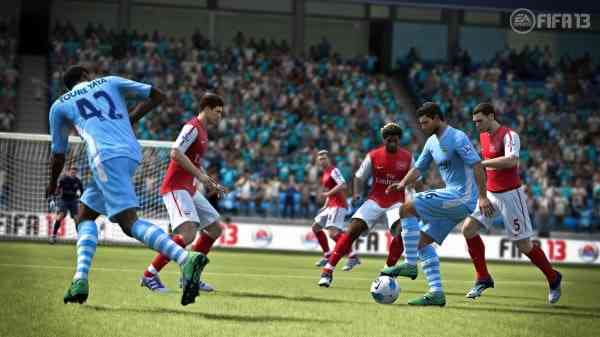 The next notable addition is the “Attacking Intelligence”, which is observable on perhaps more of a subtle level.  This year your teammates play a little smarter when attacking opportunities surface.  This is definitely visible when streaking down the wing.  You will also notice players jostle to find open areas in an effort to create more passing channels and space from defenders.  AI players actually run around defenders to get into an open area.  In essence your AI teammates seem smarter.  It is almost as if the AI is now thinking 2 steps ahead and not just reacting to the play at hand.  Players change their placement on the fly and if one player makes a certain break into an open area, another player may back off and find yet another open area.  It makes for a more dynamic experience and one that is just a little more exciting.  I found that it can be frustrating at times as I want to keep going back to attacking plays that generated scoring opportunities.  The only problem is I could never recreate that exact same scenario as not only would defenders adjust but my attacking AI would adjust as well.   This frustration is due not due to a flaw in the game, but how much realism is in this area due to the changes that have been made.  If there is such thing, it is a “Good Frustration” as it made me have to think even more, which sometimes I don’t like to do.

FIFA 13 has also introduced “First Touch Control” which is the physics involved in passing and kicking the ball.  Balls no longer stick to players like they have in FIFA games of years past.  Some things we have taken for granted in previous FIFA games is no longer the case this year.  For instance, when you lob a pass at a player who is rated below 60, there is a higher chance that the player will not be able to handle a pass cleanly every single time.  Past games the ball would ending up onto his foot like it was glued to it.  In FIFA 13 the defensive pressure, trajectory of a pass, the height of a ball, a players skill, running speed and timing, and even the weather will all factor in on how well you will be able to handle a ball that comes to you.  You will need to adapt to certain conditions this time around as the ball just doesn’t “stick” to your body or foot.  I certainly missed not having that perfect control for every player, but in the end it made things a little more true to life.  There are now more opportunities for loose balls and a much higher turnover rate than I have seen in past games.

Last year FIFA 12 introduced “Precision Dribbling” which gave players a higher fidelity of touch on the ball.  It made for a smoother experience, but that was not good enough for the development team as this year FIFA 13 introduces “Complete Dribbling” that allows for 360-degree directional mobility giving you much more control.  You can now dribble the ball with more control while shielding the ball from the opposing player.  Even during some contact, players are able to maintain possession.  You are also able change direction quicker and more precisely at slower speeds.  Once again it just felt smoother and more authentic.  In one game with the my home MLS team, the Vancouver Whitecaps, I was able to shield the defender with my back as I dribbled the ball back and forth looking for an opening.  Once the defender committed a certain direction, this opened up an area and I was able to walk right in and score.  The play even looked fantastic on the replay camera and certainly showcased this new feature.  Needless to say, “Complete Dribbling” allows for more freedom in attack replicating real-world dribbling leading to some great play opportunities. 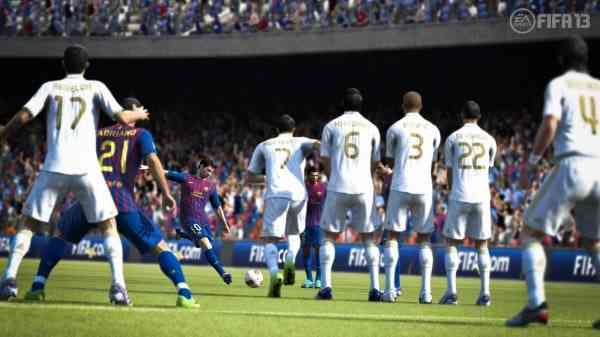 The last of the five major gameplay features is the “Tactical Free Kicks”.  The free kick feature has been given a boost in FIFA 13.  You can do some ‘dummy runs’ for up to three players as you attempt to get the defensive wall to commit.  You can also do a variety of short passes or just simply ‘bend it like Beckham’ taking a shot at the net.   All in all, it is a nice little addition lending to more of that authentic FIFA feeling.  I have to say that this does take some practice, and you won’t always be proficient at this part of the game, but you will get better and it can really affect how the game is played.  I liked it and thought it was a great addition.

Much of my time with FIFA 13 was spent in Career Mode, which also received some enhancements this year.  Now you can play all international friendlies and you can play in the Euro Championship, World Championship, or any championship that is available to your club.  This is something the FIFA community has been requesting for quite some time and you now have the opportunity to do this.  The level of depth to the mode is impressive.  You will manage your team right down to the smallest of details.  It is truly a management based experience and something a lot of FIFA fans should appreciate.  All the features, stats and leaderboards from previous career modes are back.  Not to mention transfers (trades for your North Americans) will require some careful planning as you assess the true market value for players, and counter offers from other clubs.   It is amazing how deep this aspect of the game is and for those looking for the true “manage it all” experience, it is easily found in FIFA 13.

Another new addition to the franchise is “Skill Games”.  Skill Games are tutorials of sorts that allow any level of user to learn or master the FIFA franchise fundamentals.  There are eight disciplines for you to learn and four types of games within each discipline.  Within each game there are four different skill levels (bronze, silver, gold and skill challenge).  Each skill level gradually teaches you the intricacies of each discipline, such as passing, shooting, crossing, dribbling, corner kicks, etc.  They become progressively harder for each level.  These games also have leaderboards and XP as well, so you can compete against friends or worldwide leaders, and you’ll earn in-game XP while doing it.  Given I still need to refine many of my FIFA skills, I found the Skill Games to be a welcome addition.  It was great to go back and learn the basics while attempting to master those mini games. 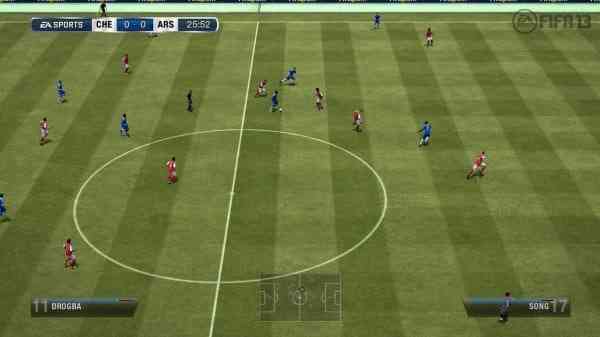 Of course the online play is back and remains a strong point for the franchise.  Not much has been done to enhance the online game this year, but as I have said before this is not a bad thing.  The regular suite of features return with online leagues and full 11-on-11 soccer is represented.  Connecting to EA servers still takes some time and those load times can get to you, but for the most part I connected without a hitch experiencing no drops.  The games I played were pretty much lag free experiences and free from any slow-down.

Visually, Overall, FIFA 13 is a stunning looking game.  The players and their celebrations are incredibly life like.  The stadiums, the pitch and the crazy fans all look great.  I really have no complaints when it comes to the games graphics.  Likewise the games sound is equally fantastic.  Everything from the commentators to the soundtrack to the on-field chatter, FIFA manages to create a terrific sounding game.  Even my daughter commented on the fans reactions, which included a lot of singing and chanting during the game.  The singing only serves to heighten the soccer experience.

One thing is for certain, FIFA Soccer 13’s development team has managed to drive this yearly franchise forward by delivering an authentic and true to life soccer experience.  The new suite of features only serves to enhance an already stellar experience.  FIFA 13 does not see an overhaul, but rather some significant refinements, which bring the franchise closer to capturing the unpredictability of the sport itself.  The FIFA faithful will inevitably pick the game up, but even those with a slight hankering for some virtual soccer action will not be disappointed.