Femida is a point-and-click adventure mystery game by Art Interactive that has the player take on the position of a criminal judge post-revolution of a formerly communist nation. The protagonist, Demian, has to navigate his own desires to protect his wife and child and find out what happened to his father, while also trying to deliver justice to the people of the newly democratic country. It’s more complicated than it looks, though—every decision made in court could have a personal effect on Demian’s life.

The game is very text-heavy, with the majority of the action being played out in court battles that Demian decides the fate of. There are interludes in the apartment he’s sharing with his cousin (I believe), who works as a doctor and is very insistent that Demian takes his pills.

There are also subplots involving a detective whose father died in the recent revolution, Demian’s mother, who doesn’t seem particularly worried about her husband’s disappearance, and letters to Demian’s wife and child. There’s also a dog you can pet!

Don’t get me wrong, there’s nothing wrong with a text-heavy game. I love point-and-click adventure games, and I love deciding fictional peoples’ fates. However, the translation from Russian leaves a lot to be desired. When I first started playing the game, the translation errors were in nearly every sentence, although it was quickly updated to fix this issue…except, honestly, it didn’t fix much of anything.

The translation is still clunky at best—while there are less complete typos (although there are still some of those), there are significant grammar issues and sentence structure problems throughout. I’m glad the developers are working on improving the game, but right now almost all the in-game text is actively working against Femida. A text-based game without the text is almost no game at all. 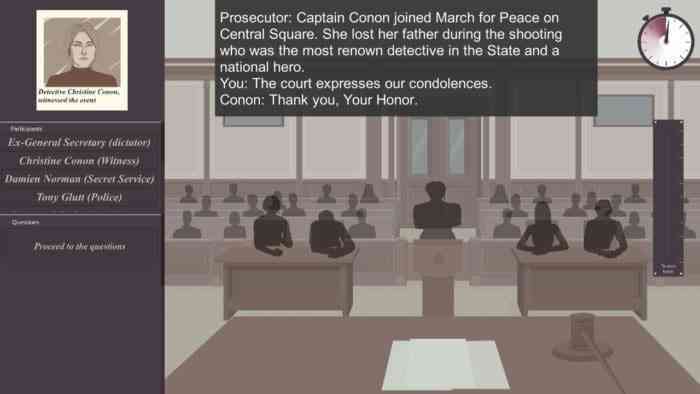 Perhaps worst of all, the story just didn’t draw me in. When a piece of media doesn’t name their places past vague descriptors like “the country” or “the government,” and the events and people are only referred to as “the Dictator” and “the Revolution,” they are so general that they lose any resonance for me. I thought there were some interesting ideas presented in the court cases themselves, though.

I liked how much Femida tackled difficult subjects, from sexual assault to cannibalism, but the distractions of the translation and the clunky UI really pulled me out of the game and made it difficult to focus on the story. And when I could focus on the story, I found that the interesting stuff was outweighed by the inconvenience of getting there. And honestly? I feel like it’s difficult to fully tackle such serious subjects in one in-game court case, and even if everything worked perfectly, I don’t think I would have been convinced.

Keep the Drama in the Courtroom

The non-court scenes were the least compelling for me. So many characters came and went, and the exposition was so clumsy, that they held no personal meaning for me. Demian’s personal life was confusing, and I made reckless choices just to see what happened, because I honestly wasn’t concerned about his safety or livelihood. There’s some kind of court approval system with the audience approval, but it was difficult to gauge, and I stopped paying attention to it pretty early. When I got a bad ending, I didn’t feel bad about it, and I wasn’t inclined to play it again to see the other options.

I dislike giving such a harsh review to an indie because I know how important reviews are. I know people worked hard with little money on this game, and I respect their labor and efforts. However, I can’t in good conscience recommend this game to anyone I know, and I think it needed, not only more time in translation but considerably more time in development to flesh out nearly the entire game. The only reason I finished this game is that I’m writing this review, and it’s not a long or hard game to finish. Femida tackles a few interesting subjects, but fails on its execution in nearly all regards. The Revolution couldn’t fix everything.