This is what many have been waiting for; a true full-scale epic finally coming to VR. On paper, bringing Fallout 4 into VR sounds like an amazing experience for players. It’s a game that HTC is certainly hoping will be a real hardware mover as it’s been bundled with the Vive headset in the lead up to the holiday season. That’s quite a lot of expectations and pressure to live up to, so let’s see how it stacks up.

As this game, much like its original incarnation, is content-wise, I won’t be delving much into the story. This is just retreading ground many may already know. In the case that it is entirely new to you, check out our review here to get up to speed. While I’ll be focusing mostly on the new VR aspects here, it doesn’t necessarily mean I’ll be ignoring the original content.

The first thing here is literally a big one: the size and scale. In comparison to most VR titles, it’s massive. While an all too common complaint among VR titles is that they are too short, I can assure you that this is an absolute non-issue with Fallout 4 VR. There is no shortage of things to do and hours to put in. Ironically, I wouldn’t be surprised to hear an occasional lament on it almost being too big. It’s far easier to put 80 hours into a game from a comfy chair than with a headset strapped on, but in the end, all that means is it may take more real-world days to complete the game. After all, VR sessions tend to be a bit shorter in duration, however, you’ll still likely spend the same relative amount of hours playing overall.

“It may not be quite as good a VR game as a standard one, but it’s still good nonetheless.”

So with that big giant world and lots to do there needs to be a way to navigate it. Luckily there are a few options for locomotion. By default there is teleportation. The implementation of which isn’t too bad and while it may be the fastest way around there are a few drawbacks. To account for sprinting and AP usage, the marker showing where the player will teleport with either be in blue (for walking) or green (for sprinting). In theory that is good, but the distance available to teleport each time is rather short. For farther distances, this results in spamming the trigger to make a whole lot of short jumps instead of a few longer ones.

If teleportation isn’t your style there is controller based movement as well. This does make being able to choose between walking and running far easier and conserving AP if needed. The drawback here though is that it may not be compatible with your lunch. There are a few comfort options that can be toggled on or off to help ease players in and account for differing abilities to handle such movement. Both styles do also offer some snap turning as well. This is occasionally useful, but since it is a Vive exclusive it’s not as important of a feature as it would be with a Rift. 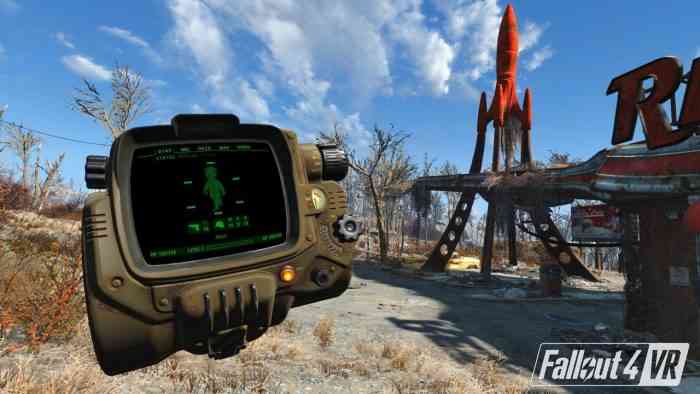 That’s right, this is technically a Vive exclusive. From all reports it is possible to run the game on the Rift, however, there seem to be some control related issues. There may be some workarounds out there already, but just realize that if you want to play it on a Rift, it doesn’t have native support. That isn’t the only hardware specific thing to be concerned with either. There are some fairly beefy graphics card requirements as well. Minimum requirements are either a GTX 1070 or RX Vega 56; the recommended being a GTX 1080 or RX Vega 64. From personal experience, I can say that a GTX 980 TI worked for me with zero issues and didn’t require any fiddling with settings.

Enough of the hardware talk though, let’s get into the VR implementation. Being that Fallout 4 VR wasn’t rebuilt from the ground up for VR it can feel a lot like it’s just Fallout 4, but in virtual reality. Many of the games menus are still in 2D. Conversations still bring up the same dialog trees. It’s not bad, however, things that VR players have become accustomed to, like being physically able to pick up items, aren’t there. In fact, unless you want to punch someone, you won’t see hands at all either.

“Being physically able to stare down the sights of your gun or to just straight up swing your controller in order to pistol whip the enemies is definitely satisfying.”

There are some good things too though. Being physically able to stare down the sights of your gun or to just straight up swing your controller in order to pistol whip the enemies is definitely satisfying. It’s not the greatest gunplay in VR, but it’s good enough that you’d seldom be bothered by it, if at all. Being able to just lift an arm and see the pip boy is nice too. It feels much more natural that way although it can be a pain to navigate with the controllers. If keeping your arm up gets tiring it is also possible to just bring the interface up to the full screen as well. Base building also feels more natural to do in a VR environment.

Fallout 4 VR is really tough to come to a consensus on. On one hand, the original is truly a great game on its own, there is no doubt about it. On the other hand, the VR implementation throughout the game seems to be less than what most players have become accustomed to. That last point, however, may not matter that much as I suspect this very well might be a first taste of VR for a lot of those who were on the sidelines waiting til now. It may not be quite as good a VR game as a standard one, but it’s still good nonetheless. Even though I might have liked some more VR specific interactions. Yet, in the end, I wasn’t as bothered by it as one might think. I spent countless hours out there having fun and will hopefully continue to do so for many more. 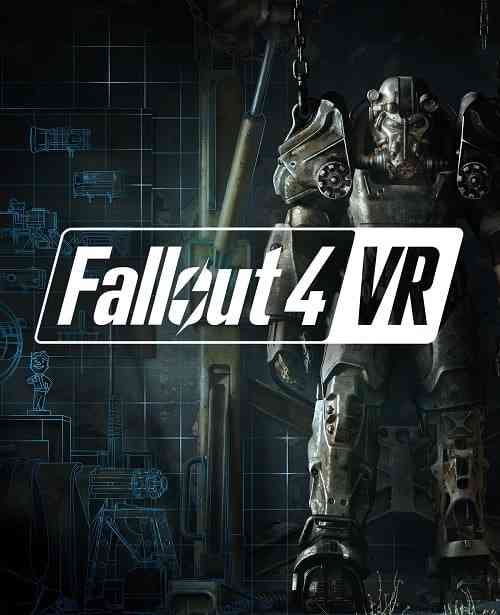 The Walking Dead: Saints & Sinners Chapter 2: Retribution Review – More of a Good Thing
Next The End Is Nigh Review – 600 Levels Of Rage and Revelry
Previous Gorogoa Review – A Compelling Digital Storybook