Fallen Legion: Sins of an Empire Review – How To Break Your Fingers/Controller/Heart

Fallen Legion: Sins of an Empire is about a girl who has to feed souls to a magic book so the empire she inherited from her father doesn’t crumble. She acquires these souls in battle, using the spirits of long-dead heroes known as ‘Exemplars’ in order to claim victory. She’s also faced with a series of snap decisions which will change the fate of her empire along the way. The overall experience looks great but falls apart in its execution.

The art style is reminiscent of George Kamitami’s hand-drawn characters from games like Odin Sphere and Muramasa: The Demon Blade. Fallen Legion isn’t quite as lovingly rendered, but the imitation still looks terrific. Your fighters are art in motion, paintings that have leaped from the canvas to do battle. It’s a real shame the final product doesn’t more closely emulate its obvious influences.

So, about the combat. I struggle to accurately convey to you, the reader, how cumbersome and clunky the whole affair is. Picture your second day on the job as a chainsaw juggler and you’ll be pretty close. Attacks are executed with a simple button press, but you have three members whose attacks need to be manually triggered. This means you’re frantically mashing three buttons as fast as physically possible in order to win. At first, cycling through attacks was a little dull, but perfectly manageable. Then the game introduced the blocking system. Bust out your shield at the right moment to negate damage and refill your AP. Of course, there’s a one-second delay between input and execution. Worse, if you don’t perfect those blocks, you’re dead. As in, the first boss fight is unbeatable without a 75% block success rate. Which is fine. Timing out a single enemy’s attacks is downright feasible compared to say, a squad of regular enemies. Then, you’re juggling three sets of attacks and block times simultaneously. All of this would be super intimidating if you blocked when you press the button. Which you do! Sometimes. Other times you just take a sword to the face. You just never know what’s going to happen when you press L1. It’s exciting, really.

“The overall experience looks great but falls apart in its execution.”

You know what does land with more accuracy? The writing. I found myself chuckling a few times, which is always nice. Unfortunately, there’s way too much writing stuffed into certain scenes. The game tries to establish characters as snarky or dense or cruel and spends way too much time doing so. The Grimoire (your soul-eating magic book) is given a lot of life in each of its lines. The book has all this personality buried under a slow march of exposition and character reactions. Princess Cecille, Fallen Legion’s protagonist, is given a similar level of care and attention in regards to her writing. She has a smattering of decent lines strangled by the surrounding narrative. Not every character is a diamond in the rough. Some of these people are just as bland as the driving narrative. This only serves to make interesting characters like the Grimoire and Cecille stand out even more. 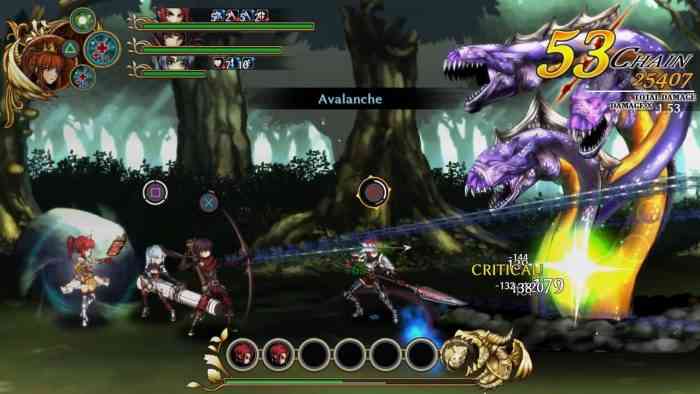 Beyond the dialogue, there are novels worth of text in this game that only serves to disguise it as an RPG. If you investigate the menu, you’ll find the collections tab, wherein all the useless character systems are stored. You acquire tribute bonuses that are listed in one enormous page. You can’t interact with them at all, but you can see them. There are pages and pages of guides that act as lessons for every aspect of the combat.You get a huge stash of gems that make incremental changes to different Exemplars. You can equip three of those at once. Of everything listed here, only one page of a single menu offers you any agency about how your fighters develop. The rest of this material feels quite useless. Especially the Tributes. Why bother giving me a huge list of all the improvements given to my fighters if I can’t look at detailed stats, equipment or experience? For that matter, why is it just a huge list organized by when you acquired said tributes? Why not just give us a character page with detailed information on it? On top of that, there is no transparent experience system. You aren’t gaining levels or points after every fight. You just get more tributes added to this clumsy list after you finish a level. It’s like the developers wanted Fallen Legion to feel like an RPG, but instead, I just feel taunted. Everything just feels off, like a wax figure of a celebrity.

During my run through a given stage, I was confronted with problems relating to my empire. For example, some prince’s aid has been discovered tampering with evidence. Three options are displayed. Red options are more aggressive ones, while the blue and green choices are more defensive and calculated. If you pick red, one of your fighters might get a substantial strength boost. Of course, you’re also choosing to execute the accused, but these are the prices you pay for power. I chose execute in this instance, mostly because I was getting creamed in this particular stage and needed the edge. Afterward, while still in the middle of the level, I was confronted by one of my subjects. She condemned me for my heartless actions and the overall morale of my soldiers suffered as a result. It’s a pretty fascinating system that makes difficult decisions even harder by adding extra temptations.

“The combat… my god the combat. I can’t imagine playing through the entire campaign with all that frantic button-smashing.”

I really wanted to like this game. The art direction is terrific, with even the basic enemies given the same level of attention and care as the protagonist and her crew. The writing shines in spots, as well. Those little interactions between Cecille and the Grimoire were oases of interest in an ocean of narrative oatmeal. And those weird snap decisions you were forced to make mid-battle? I feel like the team was really on to something with those. The pressure is put on you to make a choice, and the resultant implications are far-reaching and permanent. It’s an excellent way to reproduce the pressures of leadership. But the combat… my god the combat. I can’t imagine playing through the entire campaign with all that frantic button-smashing. Like, the thought of it makes my hands hurt. Not only is the fighting too convoluted to come together right, but it’s actually exhausting. You can’t expect your players to develop lightning-fast reflexes for mastering your fights while tying the block command to a half-second delay. That’s just cruel. Remember how old RPGs had those weird minigames, where you smashed buttons as quickly, violently and rhythmically as possible in exchange for silly little rewards? If you played one of those and thought “this would make a great core mechanic for a full-sized game,” then Fallen Legion: Sins of an Empire was made specifically for you. Otherwise, I can’t recommend it.