Doctor Kvorak’s Obliteration Game (or simply Doctor Kvorak) is a long in development puzzle game that’s finally released on Steam. What started as an independent film by British developers Richard and Lin Bang, entered a year’s long development process and finally was unleashed on PC as a full game. Doctor Kvorak tries to hang a lot on the charm of its story. The player is one, and eventually three, contestants on a game show: The Obliteration Game. It’s a mad puzzle put together by Doctor Kvorak, an insane, perhaps omnipotent trickster space god, forcing you to play with no less than the fates of entire worlds on the line. There’s more to Kvorak’s plans than a simple game show, and as you progress you will start to see the man behind the plan.

At its heart, Doctor Kvorak is a 3D puzzle game. It ostensibly looks like a platformer, but you don’t spend too much time making precision jumps. It’s mostly about moving around boxes and platforms, arming switches, and avoiding timed obstacles. Eventually, you can control multiple contestants simultaneously, and then it becomes about solving the game’s brainteasers through switching between the little blobby guys.

You can tell that the game was a labor of love for its developers, which is why it’s painful to point out how much about it doesn’t work. The eponymous Doctor Kvorak fancies himself a King of All Cosmos-like figure (from the Katamari games) but he comes across like a bargain basement version of Star Trek’s Q. He’s annoying and gimmicky and he never stops talking. He likes cheese. He hates chickens. He’s immortal and just a bit wacky. And he will hammer these jokes into your head until you’re ready to mute him.

This would be fine if the gameplay was strong enough to be worth some silliness, but Doctor Kvorak doesn’t control well, which really damages its puzzles, which are more than adequately designed. Have you ever spent time searching for the ‘run’ button only to discover there isn’t one? In Doctor Kvorak, there’s a walk button, in case you want your already slow character to move even more slowly. The mouse and keyboard controls are counter intuitive, but even with a controller, the game is hard to control. The puzzles are mostly of the crate pushing physics variety, but the physics just aren’t there. Sometimes the crates would get stuck on a wall, sometimes each other, sometimes the character. There were times when they felt too heavy to slide around, and other times when they felt too floaty. I wanted to finish levels not to get to the next puzzle, but in hopes that the next one would offer something different.

Doctor Kvorak is unfortunately further hampered by inexplicable design decisions. When I decided to make my own fun by jumping around, I found that if my alien blob man fell any further than his height, he would collapse in a heap, only to laboriously pick himself off the floor. This animation served no gameplay purpose, it only slowed down the already slow proceedings. All in all, these pitfalls start to add up and it’s a shame because a silly high stakes game show had real potential but the weak controls and inconsistent physics scared me away from taking advantage of all the things each puzzle offered. I never saved a planet, they were all obliterated. 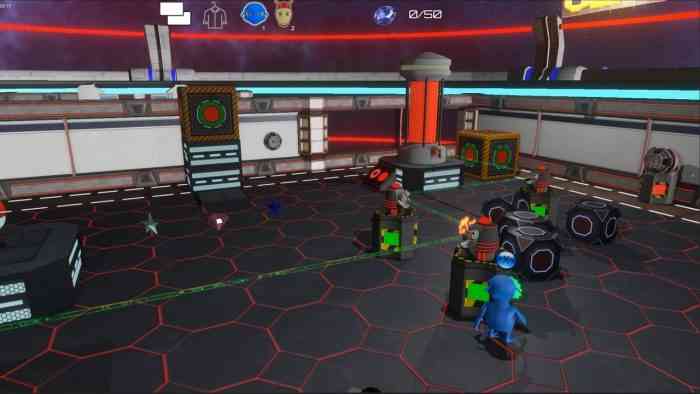 Graphically, the game has some style, but this is a place where the small production team hurt it. It reminded me of Psychonauts, both in style and quality. The former is a good thing, as the characters have a fun old-school cartoon design about them. The latter is a problem, as Psychonauts came out in 2005. The PC indie scene has embraced every graphical style from Minecraft, to Darkest Dungeon, to FTL which proves you don’t need fancy graphics to impress, but the blocky textures look like they are from a much older game.

On the other hand, I found myself digging the music. It felt like a throwback, but in a good way, to an older funky time in video game music. It’s not straight-up chip tune, but it has a synthy quality that I could groove to. The voice acting was less pleasing to my ear. I don’t know what accent the Doctor is supposed to have, but it was incomprehensible and grating. Having subtitles on solved this problem, but didn’t do much to illuminate the meaning of the insane Doctor’s rambling.

There’s someone out there who may enjoy Doctor Kvorak’s manic style, and if so, they may find a game with decent puzzle design. Even that person though, will have to brave the game’s difficult control scheme, and finicky physics. Doctor Kvorak picked some good influences, but doesn’t come close to matching their quality. 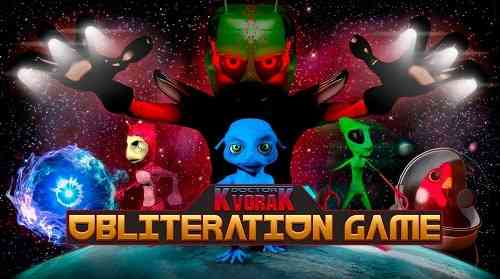