Fable is the brainchild of Lionhead Studios and the now departed Peter Molyneux.  The series is loved by many and comes with a huge following of fans that are probably wondering how designer Peter Molyneux’s swan song for the franchise has turned out.  Fable: The Journey is a new Xbox 360 Kinect game that promises full Kinect integration and functionality.  While I am not a full-fledged Fable fan I do like the idea of being able to use some of the Kinect’s features while gaming, so I endeavoured to dig deeper.

I have played with a few Kinect enabled games, but I have yet to fully enjoy how the games integrate its functionality.  I find that more often than not I have to wave repeatedly in order to make the Kinect work, which of course makes for terrible gaming sessions so Kinect games, for me, get put to the back burner; however, after playing Fable: The Journey for a brief period I can say it is one of the better Kinect games yet, but it is far from perfect.  It seems like most of the problems lie with the Kinect itself, as I had to move and re-calibrate the unit twice before it began to work properly.

While the unit had some hiccups and some repetition in movements there were brief periods where I found the game pretty accurate and responsive.  That immersive feeling began to creep in during these times although using magic and throwing spells is a tad bit on the slow side hindering gameplay at crucial moments.  The Kinect would sometimes just not want to respond at all, which of course ramped up my frustration levels and result in complete reset of the game.  The game could use more hand to hand fighting scenarios, which would really test the Kinects tracking and accuracy. 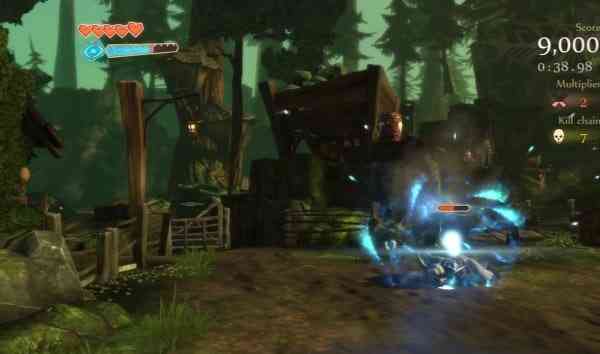 I was sceptical at first, but the game says you can sit comfortably and still use the Kinect’s features.  The seated play style is one that appeals to me, as I have never been the motion control type of gamer, so moving as little as possible is okay in my books.  Most Kinect games require a huge effort to stand up and work out, which is tough after a long day for some people.  In regards to sitting down and playing, the Kinect performed admirably, but again, it was not without some problems.  I did have repeat commands and had to sit up quite often to make it listen to me.  I was still somewhat surprised that the game was as responsive as it was while sitting down though.  The seated method for directing your horse might take some getting used to, although it is actually very easy and responsive when you know how.  Some sections are best played at a gentle trot, others force players to crack the whip, all the while avoiding debris and collecting experience orbs.  Practice makes perfect though.

Fable: The Journey is set 50 years after the events of Fable 3.  It takes place in an Albion where magic and mystery have given way to a more mundane and lucid way of life.  Adventure and magic only take place in books and told through tall tales around the proverbial campfire.  Gamers take control of Gabriel, a pretty lazy and slightly silly young man.  Never the less he possesses a good heart and loves to nap.  As per usual Gabriel nods off in the seat of his carriage and is separated from his counterparts by a collapsed bridge.  As he makes his way back to camp he happens upon Fable mainstay Theresa, who is wounded.  She is also being chased by an entity called The Corruption.  It is a classic tale of good versus evil, with destiny and courage playing a huge role in the quest to save the world.

The game is played in a first-person perspective and without the need for a conventional gamepad.  Gamers spend their time using magic while on foot or controlling Gabriel’s steed Seren.  Controlling the horse is quite easy and involves basically the pulling on virtual reins left or right, snapping them to speed up, and lifting them to slow and stop the horse.

If you work your horse too hard or neglect his wounds, he will grow slow and tired.  The drop off is noticeable and you must rest the animal often.  There are areas scattered throughout the game where you can replenish your character and horse.  Fable: The Journey forces you to have an emotional bond with the horse, kind of like having a pet that you are responsible for.  You can feed your horse water and apples to get him back up to speed and he will be loyal and love you forever. 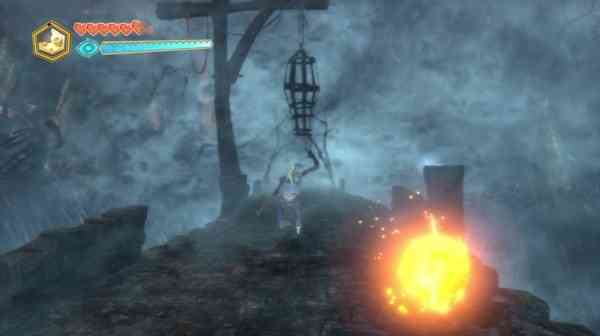 The magic system, while intuitive, has a few hiccups, and again the culprit is the Kinect.  As with controlling your horse there are many issues using magic.  Repetition and practice, with a dash of patience, will get you far though.  Players begin with a lightning bolt, the ability to block, and a pull/push move, and you then start to unlock additional spells as the game progresses, but the moves remain very basic.

The casting of magic feels natural enough, when your Kinect will allow. Most times it requires little more than a hand motion or gesture like a forward thrust, and blocking is a simple matter of bringing your left arm across your chest.  Unfortunately the Kinect sensor incorrectly registers magic instead of blocking, or vise versa, causing a bit of chaos.  Aiming at specific spots can also be a trial and error affair.  The commands are simple enough that gamers can recover in time in most situations, but again frustration can occur.

Unfortunately Fable: The Journey suffers the same tragic flaws as other games in the genre.  This ‘on-rails’ game ultimately suffers from repetition.  Players really only ever perform two different tasks, leading your horse and carriage or occasionally being on foot.You can tell the development team has made an admirable effort to break each task up to try and combat any repetition, by pacing the game so that you are never on foot or in the cart too long.  The game interjects roadside distractions and an occasional rest stop, boss battle and horse chase further breaks up what would otherwise be a somewhat shallow game. 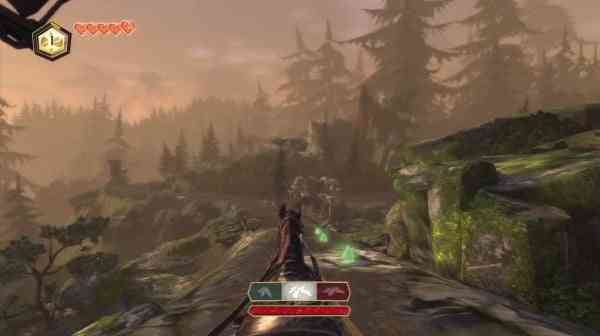 The game’s visuals are equally well done.  Albion has never looked this good even though most of it is seen from the back end of a horse. Players will visit a wide variety of vibrant locations that are wonderfully brought to life.  The quality is quite evident in the lush and highly detailed graphics.  The textures are generally top notch and the framerate is fairly steady.  There were some overly dark areas, like in caves, and some muddy looking locales now and then, but overall no one will be disappointed with the game’s visual look.  That being said, I had one minor issue while being on the horse and wagon.  As you venture through the beautiful countryside you do not get to explore it.  Other than camps and rest stops you are unable to dismount and check out your surroundings, in other words you cannot stop to smell the flowers.  I had a bit of a tough time with that aspect; it felt as if the game had closed in on me.

On the brighter side of things, the game’s narrative is told through a series of cut-scenes and conversations between characters.  The voice acting throughout the game is fantastic, helped by the excellent script and high production values.  The gameplay may not get you excited but the narrative is quite engaging and can help patch the gaps in the gameplay.  I loved listening to stories told by the lead characters while galloping through country roads, a far departure to previous games with huge banks of blocky text to read through.  It is a much more organic way to deliver information and really helps immerse players in the game world.  As the rest of the sound effects, they are just as solid.  From the sound of your horse, a campfire crackling, to the sounds of battle and magic being use, it is all there and all sound good.

I really wanted to like Fable: The Journey more than I did.  It has all the right elements for some great gaming with beautiful graphics, an excellent script and voice work, and the talents of a development team known for fantastic titles.  So what happened?  I would have to say the Kinect failed this game.  I had very few stretches of trouble free gaming and the issues pointed directly at it at this motion control peripheral, which is so full of promise.  At the end of the day the pacing, environment and storytelling goes someway towards offsetting the Kinect specific issues, resulting in an average game that shouldn’t fail to captivate fans of the series and some new players who are there for the ride.  If issues with using the Kinect hardware could be overcome, I for one would take this journey more than once.