Evertried is a brain game rogue-lite built with a 90s grind set in mind and made to farm nostalgia points in an age that farms our wallets. With old-school bits and punishing level design, the gameplay scoffs at casual play and leans heavily into the strategic mindset. That said, it’s a pick-up-and-play type experience. Several hours and dozens of deaths later, I’m still not sure what happened.

Here, it seems like old-school gaming has entered a love affair with the classic board games. Think checkers and Dead Cells, and you can’t flip the board. The pixels take your hand for a short dive through time and a return to basics. Basic is the initial description because the first few levels invite that board game burn. The maps are barren, the AI is dumb, and you eventually ruminate into an existential crisis. Then your fingers adjust to the buttons and taste the satisfaction of scythe swipes; the action develops a groove. Several blade swipes and a boss battle later, the checkerboard evolves into chess; the game gets fun, and all is right with the world.

Evertried is a fun, non-life-threatening game that is, admittedly, less cancerous than the other titles in its genre. It’s pretty kind in that it allows failure to sink in. The turned-based gameplay lets the player learn and engage at their own pace, facilitating fast or sleuthing gameplay. However, there’s a pesky focus bar that slowly depletes. The bar acts as a reward multiplier; for every kill in the allotted time, the rewards increase. It’s supposed to tempt thee into acting quickly, sometimes rashly. It’s a simple risk-reward system where you must risk a bad move or lose out on some extra shards. Shards are the game’s currency with which to purchase heals, abilities, and gameplay bonuses. And the stakes slowly rise thanks to hostile environments, dangerous sprites, and freak traps.

Though the speed of progress is all over the place, it is easy to lose track of time and the story. Evertried’s narrative collapses under repetitive gameplay and slowly evaporates through analysis and frustration. Every player that’s not a rogue-lite master is bound to repeat lines of dialogue until the next one becomes an achievement. Nevertheless, the narrative shows a lot of heart and still gives that little punch to the gut by the end. If you can stand the cryptic characters and somber discussions, the storytelling is nothing but a plus. 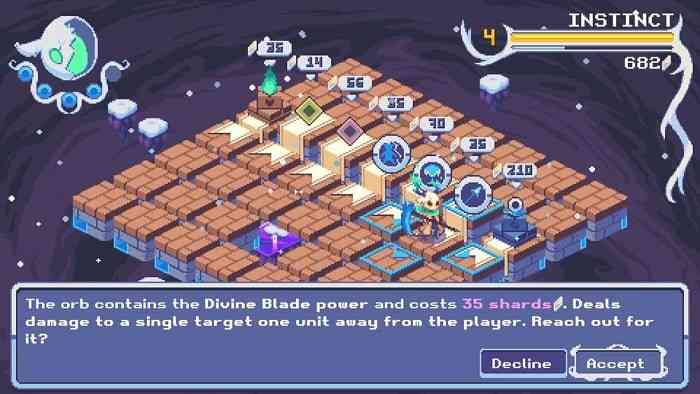 While there’s a fair ratio of smooth to rough edges, two standout features draw this gem out of the rocks. One is the level design. Before the board slaps you over the head with redundancies, the surprises come in swinging. A plethora of traps and obstacles eliminate the encroaching monotony at the start. As the going gets tough, the tiles get annoying, and positioning is key while abilities are secondary. In this fantastical afterlife, there are bound to be crazy moves you buy but never use.

It’s Cool but is it Necessary?

Abilities in Evertried are like killstreaks that serve a variety of functions. Expect anything from cool blades to party tricks that send NPCs down bottomless pits. And every ability relies on charges, which is the reason I hardly used them. Charges are the player’s lifeblood. They are the essential resource to activate those cool moves; they can recharge via movement and passives that are available at the merchant. The player can build a maximum of five charges, and the most fun abilities require at least three. Some passive abilities also need charges in order to work, which is why five never seemed like enough during my playthrough.

More often than not, the level design made for a better asset than anything you can buy. This is why I said that positioning is more important. A strategic mind can steer the board favorably and clear it quickly. Sometimes too fast to make use of those charges, which reset each time a level is cleared. And to illustrate this, I have a scenario: I lured a sprite into a death trap that initiated the sprite’s self-destruction; at the same time, another sprite walked into attack range, at which point I swiped the baster and triggered another self-destruction at the same instant another sprite stepped into the previous sprite’s self-destruction range and blew up while another sprite charged at the second self-destructing sprite that was blocking its path to me, and blew up, at the same time a sprite across the map try to charge me and ended up falling into an open tile. And that’s how you clear a board. 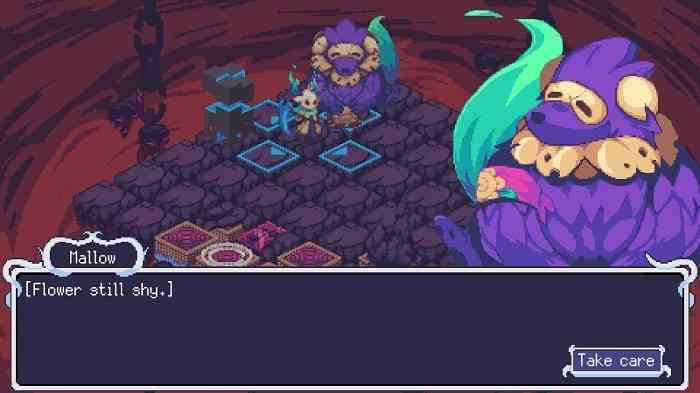 I mentioned how the bits bring out the nostalgia, but this is more true of the music, the game’s second standout feature. There was an interval during this review where I was unsure whether I started up the game because I wanted to kill some things or listen to the home screen. The score reminds me of my old marriage to repetitive SNES games. The ambiance and punishment made me feel like I was back in a different decade, rearranging antennas to play on my fat TV. The studio was playing a trick by tugging on old-school gamer sense to get me to fall in love with Evertried. A trick, I tell you. The music is that good, and it accentuates the atmosphere to the point where the environments seem more vibrant. It just exudes old-school pixels.

Boss battles engage that cerebellum, but I wouldn’t call them the central pillar of Evertried. The experience is really a deceptively fun way to improve situational awareness, a charming little escape with a hint of addictiveness. It’s not exactly designed for long sessions, however. An hour into gameplay, the freshness depreciates. Truly, the rogue-lite randomness and small game board levels work for when the mood strikes. There’s no elaborate campaign or page-turner, storybook adventure. But if you enjoy some strategy and rogue-lite retro goodness, Evertried makes for great satisfaction on a whim. 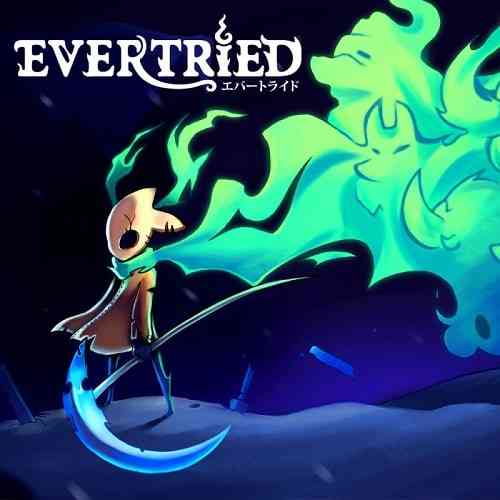 Dead Cells Celebrates Launch Of Its Third DLC With Insane Trailer
Next Unpacking Review – What’s In The Box?
Previous Riders Republic Review – One Nation, Under Fun