Ever Oasis Review – A Quality Oasis for 3DS Owners

Ever Oasis is the latest from Japanese developer Grezzo, likely best known for their work on the 3DS versions of The Legend of Zelda: Ocarina of Time and The Legend of Zelda: Majora’s Mask as well as being founded by Koichi Ishii, the creator of the Mana series. Best described as an action-adventure and role-playing game, Ever Oasis drew early comparisons to titles such as Animal Crossing, The Legend of Zelda, and Fantasy Life based on trailers and impressions. Although it was those very impressions and comparisons that drew my interest in the game, I soon found out that the whole is greater than the sum of its parts.

Ever Oasis puts you in the role of a young seedling who, because of events that occur early in the game, is tasked with creating an Oasis with Esna, a water spirit. This seedling, who is named and created by the player, strives to make this last Oasis one that will protect inhabitants from the Chaos. To grow this Oasis, the player character will have to attract inhabitants, improve bloom booths, and venture out into the desert and dungeons to battle the Chaos.

The action-adventure role-playing game is broken up into distinct gameplay sections: oasis building, and adventuring. Oasis building is comprised of attracting villagers, improving bloom booths to make money, restocking said booths with materials, and improving the oasis overall. To some, base building may feel like a chore, but Ever Oasis does a wonderful job in keeping players engaged using likable characters and strong progression. This “lifestyle” aspect of Ever Oasis evokes memories of Animal Crossing and Fantasy Life, but does enough to make it feel unique all the same.

“Ever Oasis features a charming aesthetic that begins with the character designs and continues through to the Oasis and even the dungeons.”

With respect to the adventuring aspect, Grezzo’s experience with The Legend of Zelda titles shines in Ever Oasis. Specifically, the dungeons and their puzzle solving are very Zelda-like in an effective manner, with the need for problem-solving skills and appropriate equipment. The combat in the game, however, feels a bit basic overall but the inclusion of party members improves the game’s depth slightly. Unfortunate, the combat can feel simple and clunky, which was surprising given Grezzo’s experience with the Zelda series. Overall, the gameplay of Ever Oasis was still fun, though at times repetitive and simple. 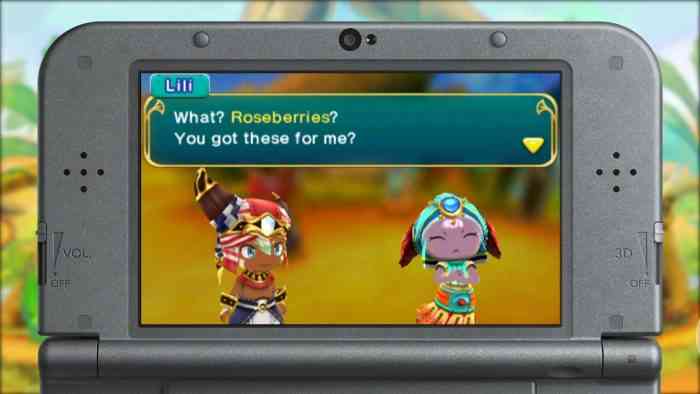 Ever Oasis features a charming aesthetic that begins with the character designs and continues through to the Oasis and even the dungeons. As a 3DS player who almost never uses the 3D function of the console, I thought that Ever Oasis’ usage of 3D was very well done in an effective manner that felt like a showcase for the feature at times. I used this feature from time to time as a test of sorts, but neglected to use it for extended periods of time. The 3DS is six years old at this point, and the graphics show in that Ever Oasis does not show any marked improvements. But overall, the colorful, charming aesthetic of Ever Oasis more than makes up for the lack in graphical quality that is likely a result of hardware limitations.

The audio factor in Ever Oasis is of relatively decent quality, with soothing melodic tunes and upbeat cheerful music, the game does not disappoint with regards to background and battle music. The music of the game was very appropriate for the setting and style of the game. Overall, the audio quality was superb, though a lack of voice acting or even the usual “gibberish” that goes along with text was a bit disappointing.

In the end, Ever Oasis demonstrates that the Nintendo 3DS can still deliver solid IPs. While the gameplay might be repetitive and clunky at times, the game encourages players to return, and the town building aspects are quite addicting. While the graphics are charming, they come across as dated. That said, the usage of the 3D feature was very well done. Overall, Ever Oasis is ever deserving of praise on a handheld gaming device some felt would be neglected with the release of the Nintendo Switch. 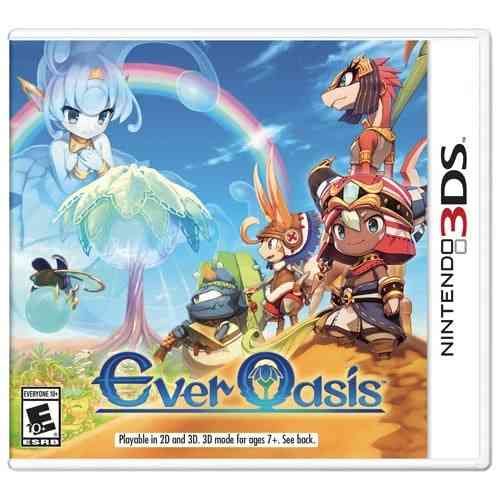 Pikmin 4 Is Arriving in 2023
Next Elite: Dangerous Review – Beautifully Crafted Yet Complex Space Travel Experience
Previous Get Even Review – Thrilling Action Despite a Case of Split Personality