Japanese developers have not given up on the PS3. From awesome titles like this year’s Metal Gear Solid V and Transformers: Devastation to next year’s highly anticipated Persona 5, the PlayStation 3 is going strong in the Far East. Every now and then North American gamers are treated to a PS3 exclusive. Eiyuu Senki – The World Conquest is one such exclusive. Fruitbat Factory has translated and released a very Japanese PS3 game as a PSN exclusive. If you like your JRPGs with strategy-based battles, and a harem anime plot, then might just be the game for you!

In Eiyuu Senki you are the Servant of Heaven, a male warrior who has been magically sent to a version of Earth where all of the great conquerors of history are cute anime girls. The plot is serviceable, but there is a lot of reading and a lot of dialogue, and 95% of it is unimportant. Characters are not developed at all, so it feels like you’re playing an RPG where everyone you meet is a townsperson with nothing to say. There aren’t that many story events either, but there is A LOT of silly dialogue that can’t be skipped. Fans of Japanese visual novels, harem anime, or silly slice of life anime might really enjoy this plot, but JRPG fans looking for depth in their epic stories should look elsewhere. As a gamer that values a plot I found myself eventually ripping through dialogue, and speed reading most of the silly conversations between characters.

Eiyuu Senki – The World Conquest is a turn-based strategy RPG through and through. There is no gameplay outside of reading, watching cutscenes and participating in turn-based battles. Combat takes place on a grid, with different attacks and commands covering different amounts of the grid. A list shows whose turns are coming up, and you have to choose commands as each characters’ turn arrives. New abilities can be gained by completing missions, and units can be purchased with revenue gained from conquering cities across the globe. That money can be spent on buying troops for your characters (which are essentially hit points). You must choose 6 characters to use in each battle, but there are easily over 50 characters to choose from!

One of the more interesting aspects of the tactics gameplay in Eiyuu Senki is choosing which characters to use. Not only do you have to accept missions to conquer new cities, but you must also leave behind troops, Risk-style (the boardgame silly), to protect the areas you conquer. This creates interesting battle scenarios, where you don’t want to use all your most powerful characters, but rather you will want to spread them out.

“The artwork in the game is beautiful. Painted backgrounds look great, and the character designs are fantastic. It’s also really interesting to see interpretations of famous men, as anime women.”

There is a world map, which spans over 100 cities across the entire globe (including Vancouver, USA!). Each of these cities has missions that consist of cutscenes and battles. Eventually the dialogue turns into relationship building, so prepare to get your mack on! As the game progresses, you gain lots of options for where to accept missions. For a $40 download, Eiyuu Senki has a lot of content!

The artwork in the game is beautiful. Painted backgrounds look great, and the character designs are fantastic. It’s also really interesting to see interpretations of famous men as anime women. Gameplay and cutscenes are entirely comprised of static art, and battles use static sprites. Everything in Eiyuu Senki looks good, but it definitely feels more like a visual novel than a videogame. 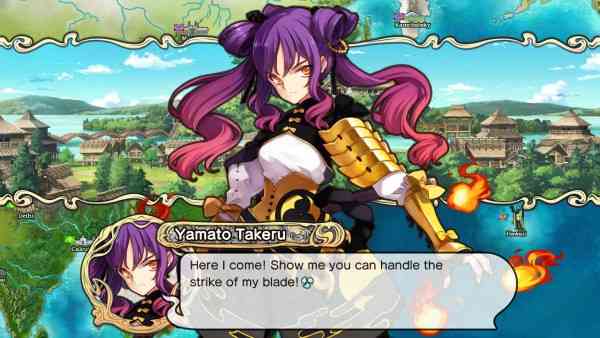 The music in Eiyuu Senki has been such an unexpected treat! It can be very epic and is usually very diverse and fun. You get to hear everything from jaunty pirate-y folk tunes to sad acoustic guitar music to epic battle orchestrations, all of which are memorable and interesting. The voice acting is very good, but it is all in Japanese. Not a problem for me, but those who do not like reading subtitles, you have no choice but to. There is plenty of dialogue, but also tons of text without dialogue.

All in all, Eiyuu Senki – The World Conquest appeals to a very niche audience. It has very good combat, and lots of options, but most gamers, even those who love their RPGs very Japenese, will have a difficult time getting into the silly story, and boring dialogue. This game is for hardcore visual novel and strategy RPG enthusiasts only.

***A PSN code was provided by the publisher for review purposes***

Minecraft Is Getting a Lot of Backlash Following Chat Moderation Update
Next Just Cause 3 Review – Delicious Destructible Violence Overshadows Framerate Troubles
Previous Life is Feudal: Your Own Review – More Than Just A Medieval Minecraft