Do not go gentle into that good night,

Rage, rage against the dying of the light.

Techland’s Dying Light clearly wears its inspiration on its sleeve. It waves it proud like a flag even if the team from this Polish developer never intended to do so. From Far Cry to Skyrim to Assassin’s Creed the game brazenly borrows (or blatantly steals) inspiration from many other franchises and then shakes things up with a healthy dose of the undead. Now it may sound like I’m preparing to take a dump on everything Dying Light has to offer but in truth I feel quite the opposite. Games have borrowed inspiration from successes of the past time and time again. While it’s appreciated when something truly original comes to light there’s nothing wrong with using something we’ve seen before and using it well. To this end Dying Light largely succeeds and it does it with a subject matter that is highly in danger of being overdone (OH LOOK… ANOTHER ZOMBIE GAME).

You play as Kyle Crane, a rescue worker with the Global Rescue Effort (GRE), who is dropped into the quarantined city of Harran, Turkey. An infection, a mutated form of rabies, has ravaged the population turning them into mindless zombies. Scattered throughout the city’s streets and buildings are survivors attempting to eke out an existence until help comes their way or until they can take advantage of someone else. Crane makes contact right at the start with a large group of survivors and thus begins the story. Torn between completing his original mission from the GRE and helping these people with little left to hope for, this moral tugging becomes the centrepiece of the game’s plot. Predictable in its nature it’s still told in such a way that most players will find it enjoyable. If you’re the type to pick everything apart you might walk away a bit more unsatisfied but despite the ‘we’ve heard this story before’ plotline I found it engaging. Side missions, while repetitive in the nature of tasks your assigned, offer more fun and original twists than the main campaign so they really help fend off the ‘been there, done that’ feeling. 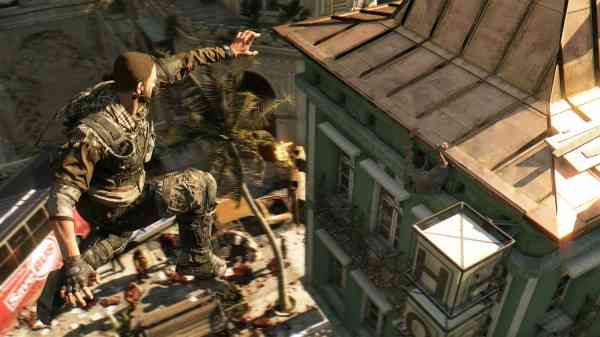 “Dying Light brazenly borrows (or blatantly steals) inspiration from many other franchises and then shakes things up with a healthy dose of the undead.”

Speaking of ‘been there, done that’ many people will immediately draw the similarities between Dying Light’s maniacal villain Rais and the bad guy we loved to hate in Far Cry 3, Vaas. He’s equal parts ruthless, insane and violent. Whether the intent to copycat one of the best villains in modern gaming was done on purpose (doubtful) or not the comparisons were inevitable. Similarities aside Rais is still impeccably acted as were most other characters in the game. Sure most of them sported accents completely foreign to the Middle East but they were still well acted. Kyle Crane, voiced by Roger Craig Smith, is the most generic of the bunch but that’s more to do with the dialogue he was given to work with than acting ability. Unfortunately this adds up to the player not really connecting well with the game’s main protagonist. In fact I found that regardless of the decent voice acting there were very few, if any characters, which I cared much about.

Where story and some of the acting are lacking is where Dying Light’s gameplay comes in to save the day. Not wavering too much from its Dead Island formula of crafting and scavenging for weapons and supplies Techland delivers a more refined experience this time around. Combat feels much less clunky than its zombie slaying predecessors. The introduction of parkour styled movement makes navigating the city of Harran a blast too although it would be nice if it was as easy to leap down from high places as it was to climb up to them. Still, once you get used to the controls, which I found to be tight and quite fluid, you’ll traverse ledges and rooftops with relative ease. You’ll be underpowered when you first jump into the game of course, but that makes sense as far as I’m concerned. As you advance your skills and acquire better weapons and abilities the zombie murderin’ becomes much easier. 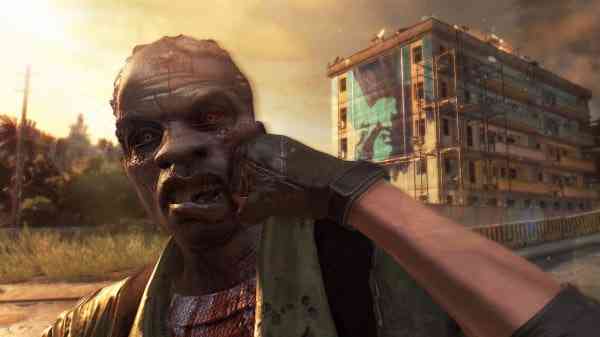 “Not wavering too much from its Dead Island formula of crafting and scavenging for weapons and supplies Techland delivers a more refined experience this time around.”

Character progression is divided into three separate categories; Agility, Survivor, and Power. You’ll gain agility from leaping and bouncing around the environment. Survivor rank increases as you complete missions and help the people of Harran. Power is gained from killing hordes in the most inventive ways possible. Each skill has its own tree as well so there are plenty of upgrade options and directions to take. If I can offer one piece of advice it’s don’t pass up on the drop kick ability… because it’s awesome, and definitely pick up on the grappling hook … because it’s also awesome. Naturally everything from navigating the environments to combat becomes easier as you upgrade but in all truth you’ll probably never feel overly challenged until you hop into the second half of the game.

The best part of Dying Light’s gameplay comes in two forms; its day/night cycle and its multiplayer modes. As the sun sets in the distance and the light changes from bright white into a murky orange glow you’ll find yourself desperately searching for a safe house to retreat to. Being caught outside as the darkness takes hold provides the game’s most exhilarating moments. The sluggish, brain dead walkers give way to high speed and vicious 28 Days Later/World War Z type zombies that will absolutely slaughter you should you find yourself cornered. Braving the darkness nets you extra skill points too so pushing your limits through the black of night isn’t without its rewards. Every move is deliberate as you choose whether to navigate in the shadows or to turn on your flashlight and remove all doubt as to your location. As your parkouring ability increases the adrenaline fueled chases through the streets with Volatiles at your heels become an absolute thrill ride. 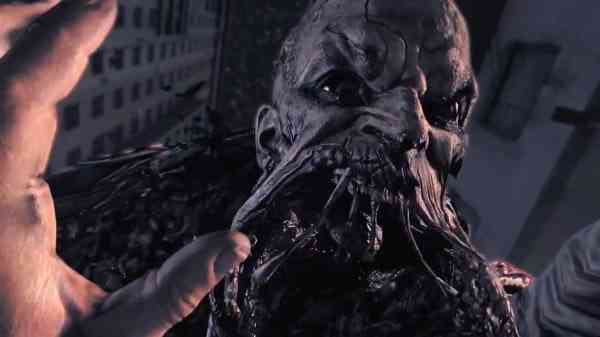 “Sluggish, brain dead walkers give way to high speed and vicious 28 Days Later type zombies that will absolutely slaughter you should you find yourself cornered.”

If you turn on ‘Be the Zombie’ mode, originally scheduled to be a pre-order bonus, you can choose to either let human controlled zombies invade your world at night or obviously be the zombie yourself. While it’s certainly less fun to be the human in this mode it’s a blast to play as the Hunters and invade other people’s games in the night. I’ll admit that I ended up choosing to turn off the multiplayer option in my own campaign because it seemed one sided to the benefit of the undead. Still, it’s a fun way to change up the gameplay and is something we’re seeing more of in upcoming releases.

If you’d rather play with friends than against them the co-op, which can handle up to four players total, is a fantastic option. You’re still able to progress through your story with your friends in tow but thrown in are mini competitions to keep things fresh and fun. If you happen to join a friend’s game that isn’t as far along as yourself you’ll still gain experience from helping them complete missions and once you reach the same point you’ll both(or all) be able to advance your single player progression at the same time. 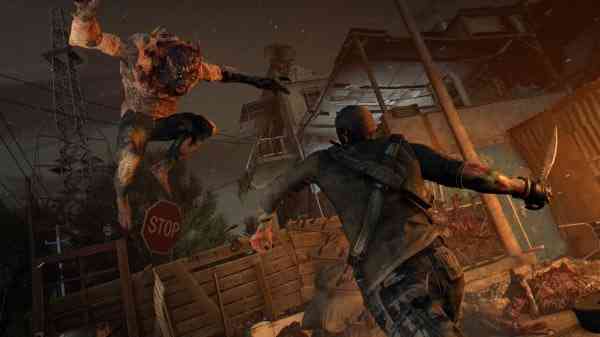 Graphically the game stands up well despite some odd jaggies and pretty dismal facial animations. The environments themselves are stunning from the run down old buildings of the slums to the foliage. Weather effects and the transition from day into night and vice versa are exceptionally well done. Of course part and parcel in presentation is the sound which stacks up equally to the visuals. The Middle Eastern influenced music in spots to the fast paced beat when being chased in the night it proves to be a fantastic one-two punch alongside the graphics to absolutely pull you into the world that Techland has created. Hands down the sound direction is one of Dying Light’s crowning achievements and you really should take the time to appreciate it.

Dying Light balances its tension filled moments with its sandbox style explore at your own pace feeling very well. While it may borrow from games we already know and love it does so with its own flair and separates itself from other less than spectacular zombie themed games out there. Techland has shown us that they’ve learned from their past experience with the Dead Island series and given us the first stand out title of 2015.

We just happen to have an extra code for Dying Light and we sure would love to give it away. Incl… in Polls and Contests on LockerDome

Next The Legend of Zelda: Majora’s Mask 3D Review – Stick it to Skull Kid One More Time
Previous Zombeer Review – Zombies, Boobs and Beer, Not Always a Winning Combo