If you’ve got a gaming itch for an action-packed anime hack-n-slash, Dusk Diver 2 may just be for you. The original Dusk Diver was released in 2019 with great reviews. Fans of the series can now continue Yumo’s adventures with the console release on the PS4, and the PS5 in the West. While Dusk Diver 2 was released on PC earlier this year, this console release is said to promise us new features, improved combat, and better visuals.

Time To Take On The Beasts

Dusk Diver 2 follows our protagonist Yumo, a year after the events of the first series. Now working and going to college, Yumo has to try and balance her regular life with her duty to save the world from interdimensional beasts. Unfortunately, it seems that these beasts are beginning to leak out into the real world and Yumo and her team need to figure out why. Working with her team, dive through fissures into various dimensions to fight Chaos Beasts. As you begin the story, it can be hard to grasp everything going on as it attempts to recount the events of the first game. The preview, while helpful for in filling in the blanks, still leaves a bit unanswered and you’ll be stumbling around getting used to some of the terminology.

Once you’ve dove into your first fissure and entered your first foray into battle, you’ll find that the gameplay is fast, swift, and very easy to pick up. You can perform a series of combos with standard, normal, and heavy attacks. You’ll also need to time your dodges and counters perfectly to do even more damage. You’ll also have two gauges that will need to be filled which can be done as you fight. You can increase your SP gauge and once you’ve built up enough, you can use your special attacks. You can equip three specials that can be used, alternating between them while they are on cooldown. The other gauge you’ll slowly fill will enable you to activate your burst mode, which powers our fighters up to deal even more damage. 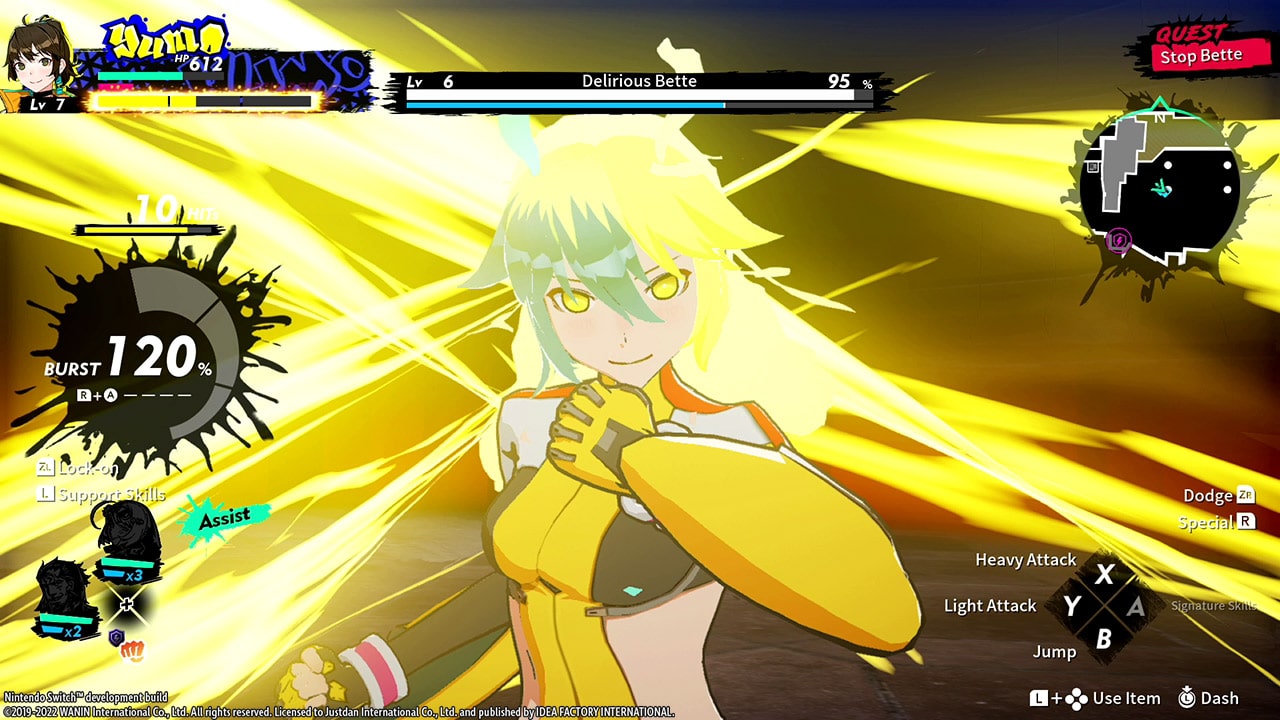 A Little Something For Every Play Style

And Yumo isn’t alone in the fight either. Unlike the first Dusk Diver which had you playing as Yumo alone, the sequel has given her some help – all with different play styles. While Yumo is certainly the best for pulling off swift attacks and fun combos, there’s also a combatant who is a heavier but stronger fighter, another with more area of effect attacks and one that has more of a long-distance focus. It’s a great way to mix up the gameplay whenever you feel like things are getting a bit stagnant!

The level and environmental design are really well thought out. When you aren’t fighting monsters, you’ll be running around Taipei city in the Ximending district itself. It is decently sized and feels very lived in. I did notice that in some areas, some textures took longer to load in than others, with the occasional NPC beaming in out of nowhere. Aside from that, Taipei is really vibrant – running around, talking to NPCs, and gathering quests is a nice experience. You can even eat at restaurants, which will give our characters a buff! 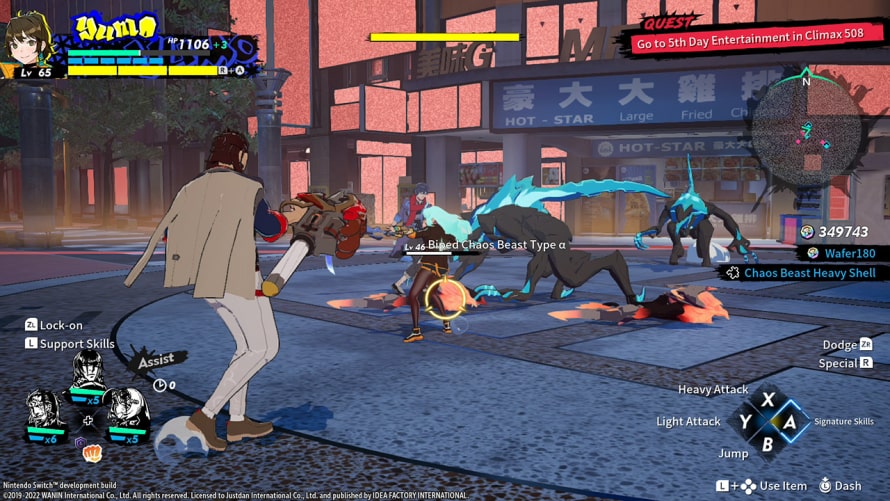 The level designs for once we start up our brawls are imaginative and well thought out! While some levels aren’t as flashy as others, you can tell that the developers took a lot of time to make some really stand out. Even the first map we go through is all inspired by an arcade. Neon lights surround you, and one part of the map is modelled after an air hockey table. Imagine trying to fight a horde of demons while an air hockey puck is rolling around the table! Not all of the levels are as thought out as the arcade map. However, many of them still offer a lot of thought and charm

I feel like I don’t see the option to manually control stats for my characters as much in gaming anymore. As you fight, you earn experience through battle. When you’ve saved up enough, you can choose what stat to raise and what character to give it to. 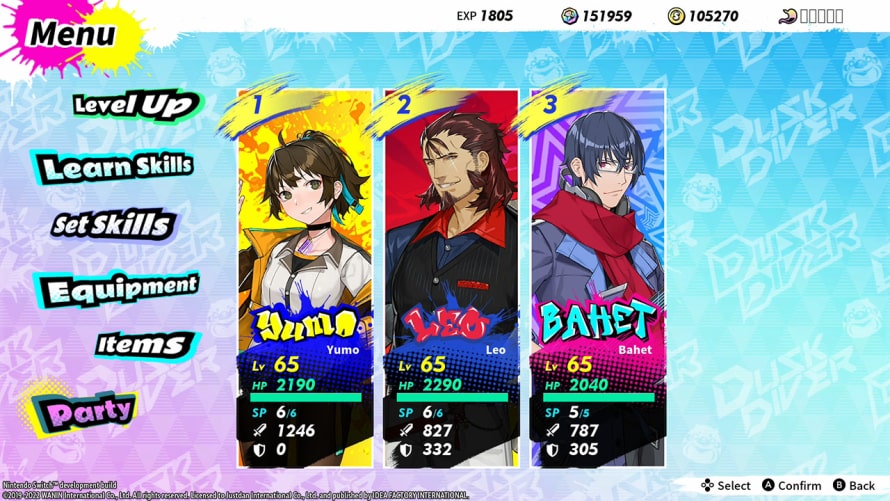 Well, It All Can’t Be Perfect

My experience playing Dusk Diver 2 on the PS4 was ultimately decent overall. The gameplay was fast and fun, the story was interesting, and visually the game is very eye-catching. There were some issues with dropped frames. Especially with how hectic the battles were and the number of enemies there could be at once. As mentioned previously, there were some moments where textures and NPCs loaded in. But in the end, it wasn’t enough to take away from my experience. However, the dropped frame rates get increasingly worse here and there. As the game goes on and the battles become more intense. My biggest gripe was the number of menus you had to slog through for the tutorial. They popped up before every battle. And when you’re itching to get back into the fight, having to read through another tutorial menu was a pain.

If you’re a fan of Persona 5 with a dash of Yakuza, I can certainly recommend Dusk Diver 2. The characters are incredibly likeable, the environment is bright and vivid. Despite not knowing the full context of the story from the original game, the story in this title was still intriguing. JRPG fans and fans of the hack-n-slash genre should definitely add this one to their playlist. 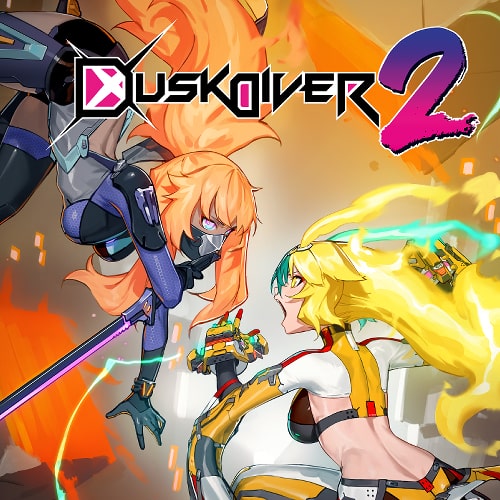