Every good walking simulator needs a strong story at its core. Many of them try to affix extra gameplay elements to provide variety, but often times, if the story is lackluster the game will inevitably fail. Draugen, another entry into the walking simulator genre, forgoes the desire to add more gameplay in favor of a tightly written narrative and two compelling main characters. The result feels more like an old mystery novel come to life rather than a video game, but nearly every second of its exceptionally brisk tale kept me eager to learn more until I had discovered all the secrets hidden in the small Norwegian town of Graavik.

Draugen begins in the year 1923 with an American scholar named Edward and his young ward Lissie (or Alice) rowing their small boat into the town of Graavik to search for Edward’s sister, Betty. Once they arrive, they find the town abandoned – boats are rotted from lack of care, mining equipment is overgrown, and there is a disturbing feeling that the townsfolk were somehow rapidly displaced. From there, Edward and Lissie begin looking for clues to unravel the mystery of Graavik and how it all connects to Betty.

That central mystery lies at the heart of Draugen and kept me invested from start to finish. Though it reveals its major twists a little more than halfway through the meek three-hour runtime, much of the story and its conclusion are subject to interpretation. This is a story about the complexities of the human condition, and as such, there isn’t always a cut-and-dry answer to every question the characters, as well as the player, has. Some might find this stingy or frustrating, but I actually rather enjoy the direction Draugen took. It still has me thinking about its themes and what they all mean even after finishing the game. If you are looking to get the most bang for your buck, though, Draugen may not be an ideal choice. With the short campaign and nothing to collect in game, there isn’t much replayability besides hearing all the different dialogue options. That being said, what Draugen does have to offer is definitely worthwhile.

With such a minimalistic approach to gameplay design, Draugen truly hinges on its writing and characters, and thankfully both are standouts. Though I didn’t find either to be as compelling as the dynamic between Joel and Ellie in The Last of Us, they still feel diverse and fully-realized. Edward is a determined, rational skeptic while Lissie is a playful and curious teenager yet stern in her beliefs. Both the characters play off each other nicely and it’s clear they share a unique bond from the beginning. I did find some of Lissie’s mannerisms a bit annoying at first, such as her constantly calling Edward “old bean” or “old sport,” but she grew on me quickly. 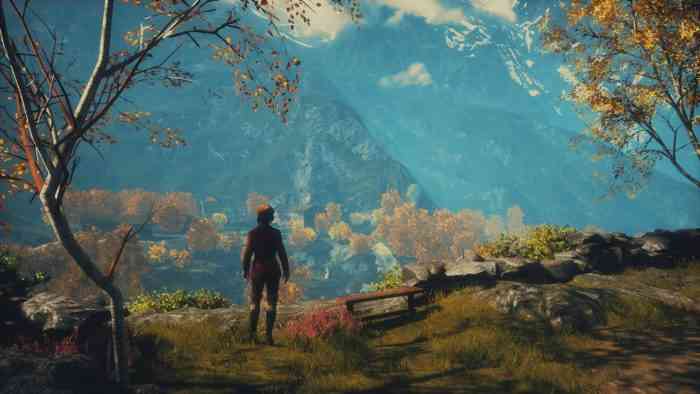 As you roam around Graavik, piecing together clues, you won’t find much to do in terms of actual gameplay besides walking, interacting with objects, and choosing dialogue options. There are a few very light “puzzles” but nothing that takes more than a few moments to figure out. In a way, though, this feels rather refreshing. Often times gameplay elements in comparable games can feel tacked-on or superfluous, and Draugen smartly focuses on story and character development instead. This also means the pacing is much tighter. Without a bunch of drawn-out puzzles or chase sequences, the plot feels seamless. There is nothing that takes you out of the moment in Draugen, and in the end, that’s a good thing.

From the opening moments of Draugen it’s instantly clear how gorgeous it is. Graavik is surrounded by a sweeping mountain range, lush Nordic vegetation and a pristine body of water. I do wish there were more areas to explore simply because of how gratifying walking around is, but what is there is stunning, nonetheless. The art style is wonderful, with many of the landscapes evoking beautiful paintings of the early and mid 20th century, and there is fantastic lighting that sets the atmosphere superbly. Yet, the same praise can’t be said for the character models. The details in Edward’s hands and reflection are great, but Lissie can look a bit stiff. This is especially noticeable in her facial animations, which can feel unnatural and jarring at times. It never killed the emotional impact of the scenes, but it would have been more affecting for the audience to see the subtleties in Lissie’s expressions.

Surprisingly, the game also runs quite well. On my playthrough, I almost never had a significant drop in framerate or any noticeable visual glitches. I did experience one bug where my character got stuck near a wall and I had to quit to the main menu, but the save system is forgiving enough that I only lost a minute or two of time.

Draugen is not a revolutionary game, but it is a smart one. The story teeters between being overly explanatory and too ambiguous but never manages to succumb to either. Additionally, the two lead characters feel deftly crafted and relatable. The short length and a lack of replay value may deter some, but Draugen is a mystery worth losing yourself in.

Top-down Shooter Bibots Launches on PC This Fall
Next Swag and Sorcery Review – A Profound Disaster
Previous Atelier Lulua: The Scion of Arland Review – The Return To Arland We Needed