Doodle Jump (Kinect) Review – Time to Dust Off Your Kinect

With bestselling iOS titles like Angry Birds and Fruit Ninja making the leap to gaming consoles, it was only a matter of time before the extremely popular Doodle Jump would make an appearance. With 150 million downloads across numerous platforms it’s no wonder Lima Sky and Smoking Gun Interactive developed the much beloved game for the Xbox 360 platform.

For those of you who live under a rock and have never heard of Doodle Jump, it is a simple platformer in which players guide a crudely drawn four legged Creature, named The Doodler, through an infinite number of platforms by tilting the device from left to right while avoiding obstacles. The touchscreen is used to aim and defeat monsters, pick up power ups, and the game only ends when The Doodler misses a platform and plunges to the beginning of the level, is struck by a monster, or is abducted by a UFO. Fun and addictive, the cartoonish drawings and simple gameplay are great for any age. 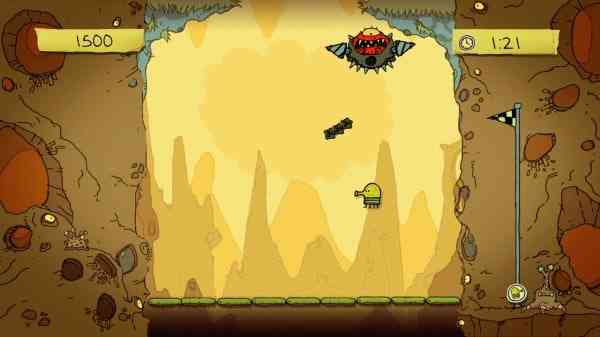 One big question I had with the recently released Xbox 360 version is why would anyone want to pay 400 points (approx. $5) for a 99 cent game they have mastered on their phone? Well for one, there are three new worlds to play through with 10 different levels. This strays away from the traditional infinite gameplay from the other games in the series, as there is a goal to achieve and end to each level. Up to three stars can be earned, with points gained by defeating monsters as well as by earning powerups and bonuses, all which add a nice replayability to the game. There are also new monsters to defeat, boss battles, and interesting new gadgets to equip.

The gameplay is still the same. You manoeuver The Doodler from platform to platform, but on the Xbox 360 you use your body to move left to right. Thankfully this is one of the few Kinect games that you don’t need a large room to play in. Subtle sways of your body is enough to send The Doodler jumping, which is great for landing on small platforms and obtaining bonus coins or power ups. Very rarely did I find myself jumping the other side of the room. Unfortunately, it is not always completely accurate and all too often I found The Doodler hurling to the bottom of the last checkpoint because the Kinect did not recognize my movements, leading to much frustration. 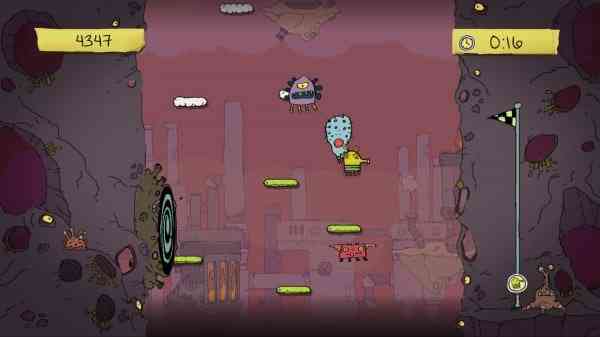 You can also use your body to shoot monsters by raising your arms and aiming at a monster to fire your cannon weapon. Clapping your hands with a power up equipped enables you to do specific things like electrify and disable a machine that sends missiles hurling in your direction. Flapping your arms will send The Doodler whirling through the level when wings or a rocket pack is equipped.

While Doodle Jump for the Kinect adds a new little twist, there really is nothing spectacular here and I was rather disappointed that there is no controller support. I found myself growing tired of standing, bobbing back and forth when playing. Perhaps a bit over priced at $5.00, considering its 99 cents everywhere else, and there really isn’t much new to offer, although the three stars and leaderboards give you a bit of replay value. That being said, I will say that this is a great title to play with the family, with the simple gameplay, quirky soundtrack and the cartoonish environments and characters. If you’re a hard-core fan of the game, or looking for something simple to play with the kids, then playing Kinect Doodle Jump is a no brainer, otherwise, you may want to think twice before buying.