Any Nintendo fan knows that 2013 is the “Year of Luigi”, and to continue the celebration of the green-hatted plumber New Super Mario Bros. U has been transformed into New Super Luigi U.  This is not a new game per se, but it is a transformation of Mario Bros. U that was launched during the Wii U’s release.   So, does Luigi manage to take the spotlight and show those Mario fans out there that he can star in a game that is just as enticing and fun to play?

Right off the hop I think I should tell you that if you are looking for a new story or new quest, you will need to look elsewhere.  The best way to explain New Super Luigi U is that the game takes the Mario Bros. U and alters the levels and enemy placements while keeping the rest of the core game as is.  Heck, the only difference the brief intro has is at the dinner table with all the characters you’ll only see Mario’s hat, as he is unexplainably missing.  Your purpose in the game remains the same as you must save Peach and save the kingdom, it is as simple as that.

Playing the new “remixed” stages with Luigi was surprisingly interesting for me.  Not only in the fact that each stages enemies and platforms are changed, and that you only have 100 seconds to complete each level, but the fact that Luigi’s platforming characteristics also change up the whole experience too. 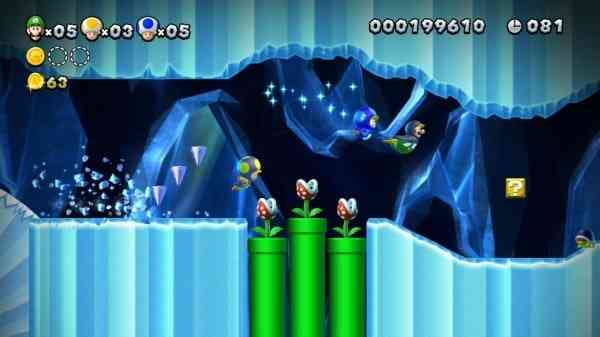 First off, you heard me right; you only have 100 seconds to complete each level.  To accommodate this fact each stage is shorter then those found in the Mario Bros. U.  Although smaller they are just challenging as you may expect.  Your first instinct will be to make it from start to finish with reckless abandonment, as you’ll panic as soon as you hear that familiar “jingle” warning you that there is very little time to complete your task, but this time you hear it as soon as you start a stage.  Don’t worry though, as you play you’ll find that 100 seconds is doable for every level, but this will take some practice, as I found out.

Where the game really changes things up is in using Mario’s brother to play through the game.  It’s a mixed bag so to speak.  First the positive.  Luigi has the uncanny ability to kind of float mid air, and this ability will allow you to reach areas that seem unreachable.  You’ll be flying over gaps, enemies, and other dangers in a way that you can’t do with Mario (take that you red-hatted plumber!).  That being said, with the good comes the bad.  Luigi’s floaty physics also make stopping when running and turning directions in mid-air or mid-move more difficult.  You’ll have to learn to adjust your control accordingly for a while as you’ll find yourself running into various enemies and falling of the edge of platforms more then you’d like.  I found it was a learning curve for sure.  Heck, my kids tried to play and they got quite frustrated with Luigi’s inability to “stop-on-a-dime” so to speak and they asked me more then a few times why the levels were “so slippery”.

One thing that became quite evident during my play through is that you die a lot.  Be it from the physics of Luigi’s control to those times when you are trying to perfect a speed-run through of a specific level or find that one last elusive star coin.  Yep, meeting Luigi’s demise on a frequent basis was something that I had to come to terms with when playing.  Don’t worry though, there is a bevy of 1UP mushrooms to be found (e.g. start of most stages) and you’ll be able to continue your journey.  This game can be tough to master though so consider yourself warned (*cue evil laugh*). 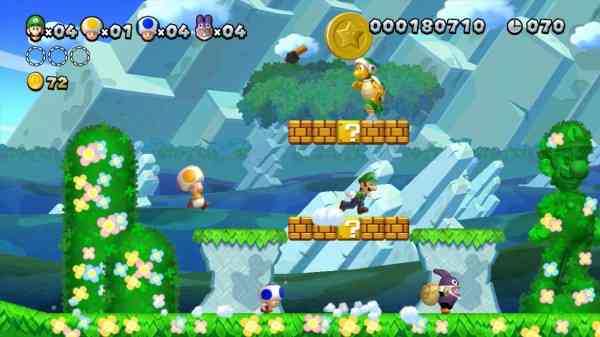 One last addition to Super Luigi U worth noting here is a new character that essentially replaces Mario as he is missing from the roster.  If you played through New Super Mario Bros. U then you will no doubt remember Nabbit.  For those who have not, Nabbit is a pesky character that you are tasked to chase through levels as he steals items from the Toads found on the main map.  Nabbit is a playable character this time around.  His proficiency at thievery comes in handy as well as the fact that he is somewhat immune to many enemies and obstacles during gameplay.  His downfall is that he cannot use power-ups.  This new character adds a bit of new flavor to the game given his pros and cons, and it was nice to see this addition.  Many will no doubt enjoy using him in cooperative play, but then again some may not.

Visually there is no change to Super Luigi U, so expect the same “Nintendo-esque” visuals that you have become accustomed to in Mario games.  The bright colours, innovative levels, and cheery feel all come through in HD on the Wii U.  The same goes for the sound, familiar and very reminiscent of any Mario/Luigi game.

At the end of the day I found that as much as I could be frustrated, it was still pretty fun to play Super Luigi U as it allowed Mario’s brother to come out and star in his own platform game on the Wii U.  Sure, some may complain that there is not much new, but if you look past the shorter remixed levels and see that the game really does challenge your platforming skills, you’ll appreciate it for what it is.  For you perfectionists out there it will definitely challenge your gaming abilities as you try to get every last star coin and best time on each level in the game.  For 20 bucks you get some intense and challenging playtime, and that is not a bad deal at all.