Developers, I have some bad news and some good news. The bad news first. We’re living in a post-Elden Ring world now. If you make a Soulslike game, it’s going to be compared to FromSoft’s masterpiece, like it or not. It’s not good enough to just be a Dark Souls knockoff anymore. Here’s the good news, though. If you can give us a decent Soulslike with something other than a high fantasy setting, well, there’s room for that at the table. So, where does Dolmen sit? At the table with the grown ups, or not?

In Space, No One Can Hear You Grind

Dolmen is an action RPG with self-described Lovecraftian elements. Sure, there are some insect-like, grotesque monsters with lots of appendages and a creepy vibe, but invoking old HP Lovecraft is a bit of a stretch. Dolmen takes place on the distant planet Revion Prime. You’re sent there to check out a drilling operation gone south. Your task is to piece together the puzzle of what happened, kill a menagerie of monsters and collect some dolmen. Dolmen is a super valuable crystal McGuffin that can facilitate all sorts of miraculous things like dimensional travel and curing male pattern baldness. It’s totally, definitely, nothing like spice from Dune.

You don’t get to see too much of Revion Prime topside, but you do see a lot underground mining tunnels and much bigger lab areas with lots of science and technology-looking stuff, most of which is shadowy set dressing. There are lots of enemies whose sole purpose in life is to kill you. Now and then the game highlights some crates and barrels for you to smash. Like Dark Souls, there are shortcuts and secret areas to find. Ultimately, though, there’s nothing very remarkable about Dolmen’s level design. If you’ve played Alien, Dead Space or any one of a dozen space horror games, you’ve seen similar levels.

Let’s talk about story. For many people, FromSoft games like Elden Ring have a densely opaque narrative. However, it doesn’t stop them from enjoying the experience. Dolmen’s story is far less poetic or mysterious. We won’t spoil it here, but if you guessed that maybe it’s about dolmen having unsuspected power, and inter-dimensionally spawned monsters or something, congratulations.

Dolmen lifts the vast majority of its mechanics directly from Dark Souls. Light and heavy attacks, dodging and rolling, stamina management, limited healing, corpse runs to collect dropped loot, bonfire-like checkpoints: if Dark Souls did it, Dolmen probably does it too. Its one innovation is that, instead of Estus flasks, you have batteries. Battery power is the source of ammo for your ranged weapons and your ability to heal, so you have to decide if it’s more important to tend to your wounds or refill your ammo. When you die, your “timeline is erased” and you have to restore it before you die again. Enemies respawn when you die or recharge at one of the game’s rather widely-spaced radio beacons. It’s Dark Souls 101. Just like in the early Souls games, recharging your battery takes forever and leaves you open to attack. 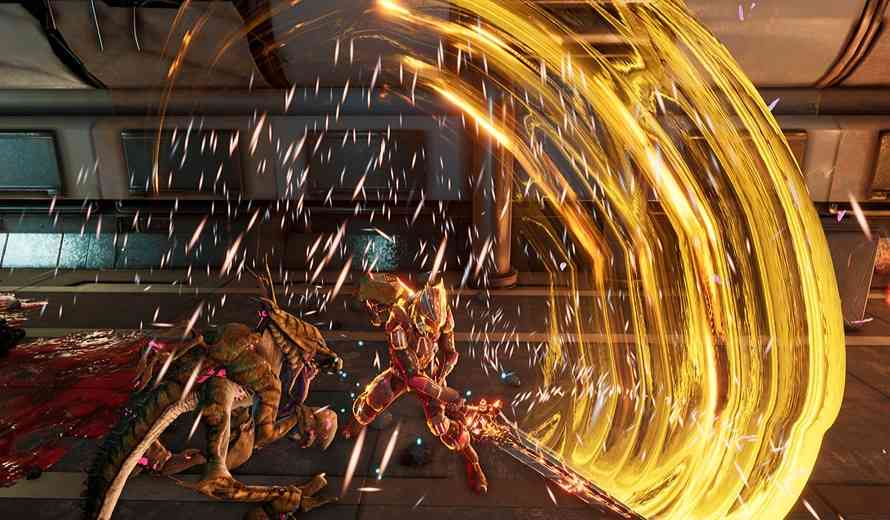 At some point, FromSoftware realized that it was a pain in the ass for the player to return to home base just to craft or level up, but Dolmen didn’t get that particular memo. That means you have to teleport to your orbiting ship to do everything. Once you’re there, you need to hit the various crafting stations located on several floors of the loneliest, most generic-looking spacecraft ever. One machine allows you to level up. Another upgrades your gear. Another one lets you respawn the area’s bosses just in case you want to grind for cash. It all just seems so artificial and unnecessary. This is future sci-fi. If Elden Ring’s uneducated medieval bumpkins can craft kit out in the field, you’d think our distant relatives from the future could, also.

A Glimmer of Fun

Dolmen’s weapons, and the classes that use them, are pretty much exactly what you’d expect: sci-fi versions of Soulslike swords, clubs and axes wielded by tanks, rogues and quality builds. Though there is a ranged weapon class, everyone has access to pistols and rifles, which shoot elemental-based ammo. Naturally, enemies are weak to fire, ice or acid and you can switch between elements and a couple types of melee weapons. There are a couple of oddballs like chainsaw swords. Despite them being largely futuristic iterations of standard fantasy weapons, most of them are fun to use. The upgrade and crafting pages are kind of a mess. That said, creating a viable build to your flexible preferences is possible.

While the weapons are varied, combat encounters are less creative and in need of balancing. All the usual Dark Souls suspects make an appearance. Low-level enemies that can mess you up, seemingly impossible bosses, mini-bosses with a specific weakness and biomechanical, fast-moving dogs. If you hated them in Dark Souls, you’ll hate them in Dolmen, but here they have a death cry that is both comically odd and annoyingly long. I mean it goes on for several seconds. 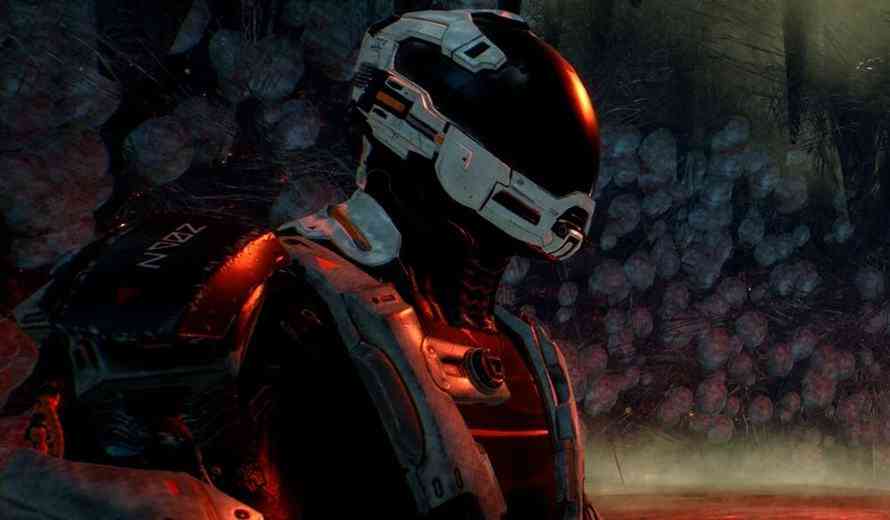 As in every self-respecting Soulslike, enemies drop upgrade materials and other loot, much of which is a variation on minerals, bits, bolts and batteries. The loot has arcane names that mean nothing outside the game’s upgrade or crafting interface. Then again, Dark Souls has often been guilty of this, too.

Dark Souls’ character creation tools have evolved into something special, but Dolmen turns back the clock. At the start, you can play with armor colors and some basic stats but you’ll never see your character’s face or hear them beyond the game’s repetitive combat sounds. The result is a player character that is particularly anonymous and bland. There isn’t much voice acting in Dolmen. The story is told via an unseen radio voice and environmental items conveniently dropped for your perusal. It’s all lacking the touch of a real writer with narrative chops.

Dolmen’s graphics and overall art design are serviceable but lack originality, at best repeating tropes that we’ve seen in games and films for many years. At least in the review build, Dolmen is beset by all manner of bugs, in particular framerate killing slowdowns that turn the game into a slideshow. A day one patch might address some of these, but be warned: Dolmen is still technically pretty rough around the edges. Be prepared for the too close camera — not the monsters — to trap you in a corner when you’re trying to back away and fire. 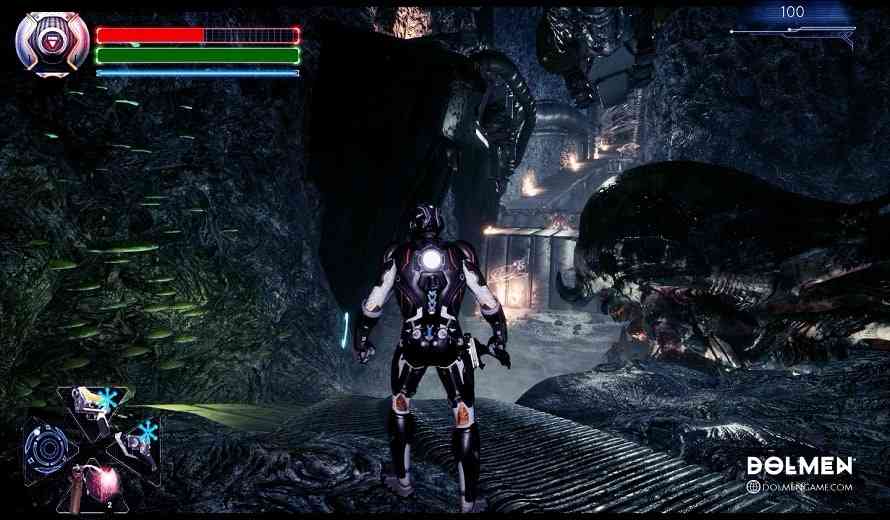 Despite its sci-fi setting, Dolmen is less a Soulslike than a Dark Souls clone, with very few original ideas. The biggest issue, beyond the overall familiarity of just about everything, is that it brings back annoying mechanics that games like Elden Ring have evolved away from. While there is some fun to be had in Dolmen’s weapons and combat, at some point you’ll just wish you were playing a FromSoft game instead.