Doctor Who: The Edge of Time Review – Time and Space and Puzzles

Doctor Who: The Edge of Time Review

When I got the opportunity to review Doctor Who: The Edge of Time, now on PSVR, I was pretty excited. Now, I’ll state right off the bat that I am not the world’s biggest Doctor Who Superfan by any means, but I have watched the TV show pretty steadily since the mid-1980s and I know it fairly well. And one thing I’ve always loved is the idea of travelling through time and space, with Doctor Who’s TARDIS probably being one of the coolest sci-fi vehicles ever. But I have to say, my time with the game wasn’t quite as awesome as I hoped. It’s a passable VR game with some good aspects, but overall I was just left feeling underwhelmed.

You see, what I was hoping for — and what, I suspect, a lot of potential players of Doctor Who: The Edge of Time are likely hoping for as well — is an epic VR journey to strange new worlds in the past and future, seeing things I never imagined and doing things I would never be able to do in “real life.” Instead what I mostly got was a pretty straightforward puzzle game, in which I was stuck inside rooms or buildings, looking for the solution to move through to the next checkpoint. If the game had been called “Puzzle Challenge: Open the Doors” then we really wouldn’t have a problem, but it’s got the Doctor Who pedigree in the name, and as such I was expecting a bit more.

Welcome to the TARDIS

Things actually start out promisingly. You play not as Doctor Who herself but as her sidekick, and you’re immediately tasked by the Doctor with saving her from whatever time and place she’s stuck in due to a “time virus” that — wouldn’t you know it — threatens all existence. Jodie Whittaker lends her voice and holographic likeness to instruct you on your journey, first by getting your butt to the TARDIS and then learning how to fire it up and … drive it? Fly it? Whatever you do, it’s awesome to be in the TARDIS in 3D on the PSVR, working the controls with your DualShock 4 or Move controller, in what turns out to be the first puzzle of the game. 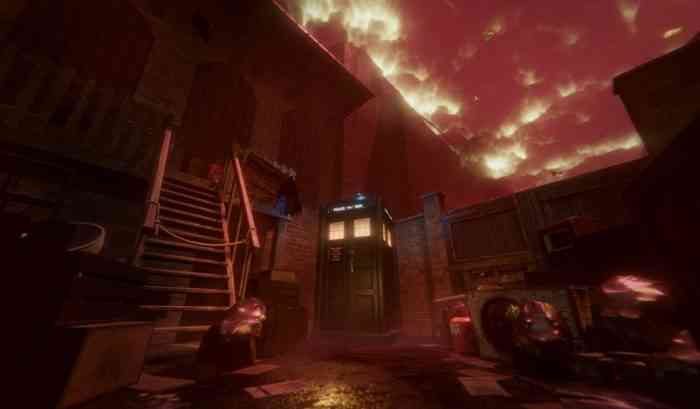 The very solid start begins to lose steam, however, when you travel to the first “alien world” and eventually find yourself stuck in a small, closed room trying to solve a pretty cliche puzzle to get all the doors open, hitting the right switches with the right lasers. Any excitement I might have had at the thought of engaging in a fascinating sci-fi story was quickly dashed, and the pace slowed to a crawl while I struggled to move to the next checkpoint. This and the other puzzles weren’t bad by any means; it’s just that we’ve seen their like many times before in lots of games. Doctor Who: The Edge of Time seems to be content to take stale puzzle gameplay ideas and dress them up in the Doctor Who ethos and lore with only the thinnest of narrative binding it all together, and that is disappointing.

To give credit where credit is due, there are some standout moments along the way in Doctor Who: The Edge of Time. Yes, the Daleks make an appearance and they are genuinely unnerving up close and in three dimensions — that high-pitched “EXTERMINATE!” voice always got to me on TV, but in VR I swear it cut through me like a dentist’s drill. The game also becomes a kind of stealth survival horror with the brief appearance of perhaps the most nightmarish of all Doctor Who foes — the Weeping Angels. These kinds of fan-pleasing moments will be enough to make Doctor Who: The Edge of Time worth the price of admission for die-hard followers of the series, and I admit they were a welcome and enjoyable respite from the rote puzzle solving.

And another positive is that technically, Doctor Who: The Edge of Time controls well using either the DualShock or Move, and interactions in VR are smooth. The Sonic Screwdriver is smartly integrated into gameplay, working as a kind of catch-all device whenever you need to “make something happen,” like opening an electronically-controlled door or making a satellite dish detach from a wall. One very frustrating technical aspect, though, is the fact that you move at a very slow crawl at all times. This is particularly maddening when you have to travel a long distance.

In its sound and visuals, Doctor Who: The Edge of Time feels very much like an actual episode of the TV series. In the area of sound, that is a good thing — great voice acting, wonderful music. In the visuals, though, that isn’t as good a thing. Ironically just like the series itself, Doctor Who: The Edge of Time is visually a bit unimpressive at times. Environments lack color and detail and sometimes it’s not the most immersive experience. For example, the control room of a spaceship I was in consisted of consoles with rows of random blinking colored lights, just like you’d see in the old low-budget 1980s episodes of Doctor Who. Out the window of the ship, a 2D image of a standard “ringed planet” looked more like a poster than a real object.

Any of the low-budget scenes or other technical shortcomings would be forgiven if — like the series — Doctor Who: The Edge of Time had a more engaging story and gave you more freedom to experience it. But it’s just too limiting and confining to ever capture the true Doctor Who magic. I wanted to love Doctor Who: The Edge of Time, but I was left feeling let down. The periodic injection of obligatory “cheeky quips” from the disembodied voice of Whittaker’s Doctor just felt like another superficial distraction from the fact that, at its core, this is just an ok VR puzzler that wastes its legendary source material. If you’ve always wanted to take the TARDIS for a spin, by all means check it out — but beyond that, temper your expectations.

**A PSVR game code was provided by the publisher**