The Dead Space series is renowned for its inventive approach to the survival horror genre.  Amongst the crowded shooter market, Dead Space found its home as a great horror series.  It originally found its reputation through the amount of tension established during its missions.  In the previous two entries tension was built through anticipation; in Dead Space 3, the horror approaches players in a different style.  Here stress is created through combating hordes of Necromorphs.  At times the amount of Necromorphs thrown at you seems almost unfair as limbs cloud the screen and it really looks like an ocean of alien bodies.  Amongst all of Dead Space 3’s new features, including cooperative multiplayer, an impressively deep weapon crafting system, and great side missions, the most notable change to come to the series is its approach as an action game with frightening monsters.  I can compare this to Capcom’s Resident Evil games, and a lot of fans will be upset about the transition of Dead Space from a slow-paced eerie tale to an action heavy cinematic experience leaning largely on scripted sequences to tell its story.  This change was already in effect during Dead Space 2, so if you weren’t a fan of the changes made in number 2, then you probably won’t be too happy with number 3, but it doesn’t mean it’s a bad game.

The Marker-corrupted creatures, many of whom we’ve seen before in the previous installments, bring numerous new tactics to the table this time around.  The Necromorphs and their appearance on the planet of Tau Volantis breathe new life into the game’s alien slaying combat.  Being that Tau Volantis is covered in snow, you must keep on the look out and listen carefully for hints for oncoming enemies.  The tiniest ripple in the snow will signal their presence before they suddenly emerge to attack you.  The visibility when exploring outside isn’t always clear, particularly so when heavy blizzards are pushing you around.  Frequently I found myself alone one moment struggling to find my way through the weather, and then suddenly surrounded by numerous Necromorphs.  It’s tense and exciting and makes the gameplay that much more.

Loot hunting is a new feature to Dead Space, with the new features applied to workbenches resource gathering.  I found that this becomes very addictive quickly.  The best way to hunt for loot is through exploration.  Hidden containers and secret rooms contain the rarer stuff, but Necromorphs often drop items that act as a form of in game currency.  All of these resources can be used to build other tools and items.  The game adopts an addictive loot hunting vibe, and I think this adds a nice layer to the rest of the game. 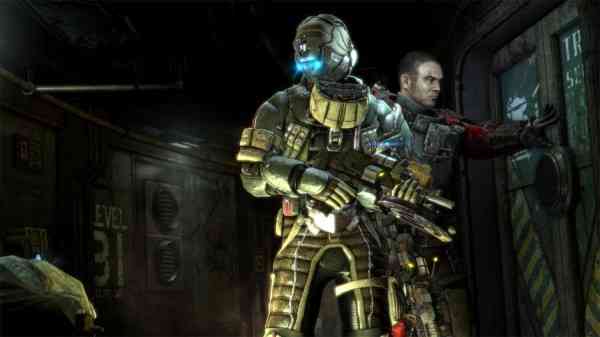 Dead Space 3’s combat receives a cool feature that breaks up the constant alien slaying.  The new workbenches allow you to craft your own weapons.  To begin with, you must select either a compact frame (one-handed) or a heavy frame (two-handed) followed by selecting an upper tool and a lower tool.  These tools determine the kind of firepower you’re using.  If you attach the military engine, you can create standard weapons like machine guns, revolvers, and a sniper rifle.  Some pretty creative combinations can yield awesome weapons and this feature really rewards players for their imagination.

By using various attachments like alternative barrel tips, and modifiers known as circuits, I found I could alter the way my gun behaved.  Adding basic modifiers can change a generic gun into a monster of a weapon.  By adding an ammo-box attachment, my weapon would automatically reload once I reached the bottom of the clip.  Dead Space 3 offers a lot of flexibility in creating weapons, and this is definitely a cool feature.

Some of the more rare resources and blueprints you’ll need for crafting are found within a separate portion of the game that houses optional side quests sprinkled throughout the main Dead Space 3 experience.  These excursions can be fairly lengthy, and they add interesting bits of historical context to the events that transpired in a particular area.

During my time with Dead Space 3 I found the game to really utilize the audio system, much like the previous games.  Unfortunately for players, the most dangerous Necromorphs are those you can hear but can’t see.  Their unsettling, animal-like roars and shrill high-pitched screams serve as an obvious hint to their inevitable appearance.  The addition of new monsters toward the end keeps the game’s combat fresh. 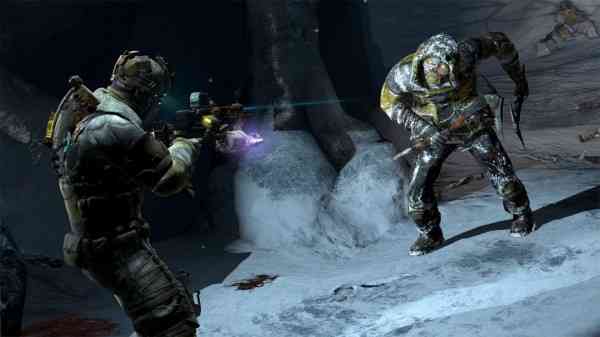 As we’ve learned with Mass Effect 3, it’s not easy to come up with an ending that will please all fans of a series.  The Dead Space plot isn’t too convoluted, but it’s large enough to lose details when transiting from one game to the another.  I should note that Visceral games did a great job in paying attention to the story and its detailed plot.  They managed to tie up many loose ends in Dead Space 3, whether through cut scenes or text and audio logs scattered throughout the levels.

Although I was initially skeptical of the co-op mode added to Dead Space 3, I found it to be one of the game’s stronger features.  To put it simply, playing with a friend is the best way to experience the game.  The hordes of enemies constantly attacking you in single player are fun, but the game seems to shine more with a partner watching your back.  When playing solo I found myself struggling with how best to tackle large waves of creatures.  Two players can efficiently work together to ultimately shred aliens.  Admittedly the game loses many of its horror elements when running through it with a buddy, but I found that it was too much fun when playing it cooperatively that I didn’t mind this loss.

Building on this even more, playing in co-op offers some unique cut scenes and dialogue that you won’t see otherwise.  Isaac and newcomer Carver frequently communicate back and forth during cooperative play, trading comments that add a much-needed touch of personality to both characters.  Carver even has a bit of back-story that unfolds through co-op-only missions, where he is consumed by vivid hallucinations that Isaac cannot see.  Often Carver will hear unsettling whispers and occasionally he even gets sucked into his own mind to combat the demons within him.  I should note that whoever plays as Isaac cannot join Carver in these particular sequences. 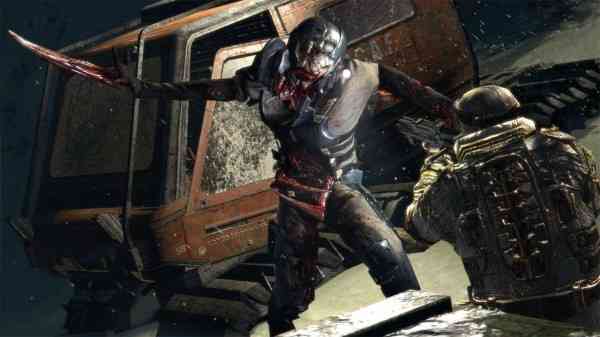 Dead Space 3 is a content rich game, but at times it stretches itself to places that it doesn’t belong in.  Sprinkled throughout the campaign are various sequences intended to give you a little break from the core combat.  These sequences can be fun, but they can also be tedious.  While on Tau Volantis, a sequence comes up in which you must attempt to ice climb, and this is not even close to being enjoyable.  In fact I found it frustrating.  These adventures are neat ideas, but aren’t always delivered well and can actually hamper the experience.

For those wondering about how long this game may take to play through, with the games side missions and full campaign considered it clocks in at around 20 hours in length.  Those who decide to take on this journey should be satisfied that the game offers them a lot of content.

The graphics in Dead Space 3 are great.  Whereas the past two games looked decent, but were nothing special, Dead Space 3 really makes the best possible use of the hardware available to become sheer eye candy.  Such things as the snowfall on Tau Volantis looks fantastic and the character designs are solid.  I don’t think anyone should have a problem with the looks of this game.  The sound design is also top notch with some great voice acting.  I felt that the acting in Dead Space 1 and 2 came across melodramatic and unbelievable, but this has been completely rectified for the third game with some great voice acting and brilliant ambient noises scattered throughout.  Dead Space 3 also features Kinect sensor options.  These options are accessed via voice commands.  As an example, you can open your inventory, or reload your weapon via a voice command.

Visceral Games wrap up a trilogy that started with a silent protagonist stranded on a desolate spaceship.  They took us through the ship, and its madness, as new protagonist Isaac Clark dealt with the Necromorphs and his dead girlfriend, and then presented a final showdown on a mysterious planet.  Many new features have become a part of the series by the time this third installment has hit.  The new cooperative mode is a much better addition then I had assumed, and it sits well within the games formula.  The essential ingredients of what makes a Dead Space game good changes with each iteration that is released; each title is different, but they are all good.  Though I feel Dead Space 3 may not be the strongest of all the three Dead Space games I found I still enjoyed it thoroughly and feel that it is definitely a title that should be on every action gamer’s radar.