Date Night Bowling’s two-part premise is right there in the title: you’re bowling, and you’re dating. Developed by Serenity Forge and published by Way Down Deep, Date Night Bowling has its players attempting to succeed at bowling, a first date, or both.

When you start the game, you can play alone, versus AI, or against a partner in local two-person multiplayer. There are ten characters total to choose from, but you only start with two (Holland and Jasper: more on them later).

Each character has a different bio, personality, and bowling style. You must unlock the rest of the characters by playing them once in the solo mode. Once unlocked, you can nudge them toward their dreams of romantic success. You can also adjust minor details like your ball weight and the amount of oil on the lane.

The first choices I made in Date Night Bowling went wrong. I opened the game for a fun virtual experience of fake bowling by myself and saw the two unlocked characters. As such, I thought those were my only options in the solo mode. I assumed I had to unlock the rest of the characters in the versus AI mode. This is not the case.

It’s not immediately clear that the game’s directive to learn more about each character by playing through their story means that you must them in solo mode. Instead, I took Holland and Jasper into the versus AI mode, forcing the two of them into a nightmarish Groundhog’s Day half-life where they must bowl and flirt with each other for all eternity, only to end with my despair as I wonder when I will make them bowl or flirt well enough to free me from my Sisyphean prison. All this for a faint hope at a single character unlock!

I might have figured out that I was in the wrong mode sooner if the often inscrutable mini-games hadn’t made it hard for me to get a top-tier score on the all-important chemistry meter. We (me, Holland, and Jasper) did alright, always being awarded Good Chemistry, but never spectacularly, and I kept thinking this was because I wasn’t performing better. 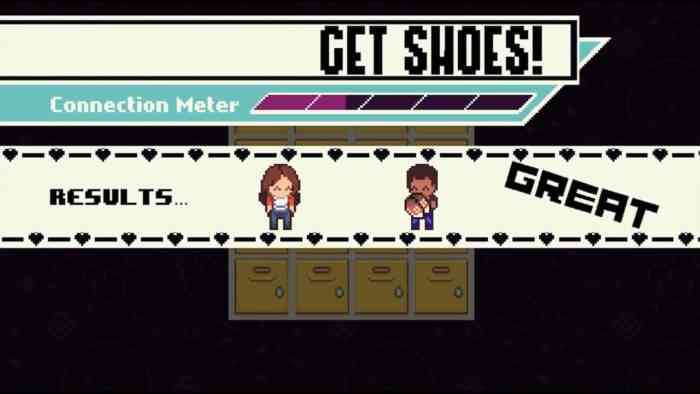 I want to like the randomized mini-games, and I do enjoy some of them. They take the form of dating interactions, like “listening to your date,” “catching popcorn in your mouth,” and “winning a stuffed animal from the claw machine.” I’m glad there was such a variety of them, but I constantly had to read new directions scrolling across the screen and some games didn’t repeat very often. The controls were also often finicky. Overall, the mini-game sequences felt somewhat out of my control.

The bowling mechanics are simple enough, although I don’t understand the spin mechanic in real life. This spin deficiency of mine translated straight over to Date Night Bowling. The bare-boned instructions assume their players know how to virtually bowl. This makes characters with spin proficiency borderline unusable for me. It’s disappointing when it comes to mixing and matching characters for spicy dating sim combos.

The pixel art makes the characters and setting charming and it’s fun to see how different character personalities interact. Unfortunately, Holland and Jasper say pretty much the same four lines throughout. Personally, if I was on a first date and the man I was with (named Jasper, likes athletics, has a Macklemore haircut with bonus rattail) told me multiple times that my bowling was “getting better,” I would leave the bowling alley with a first-degree murder charge.

I eventually figured out that I had to play all the characters in solo mode to unlock them. I wish I hadn’t had to go to such lengths to get those unlocks. The joy in the game is pairing the characters to see their dialogue interactions, but by then I was burnt out by how many solo matches I had done.

The local multiplayer is where this game should shine, but the mini-games require a level of precision that isn’t welcoming for newcomers. I played this with my girlfriend, and she had too much difficulty with the controls to enjoy the dating sim elements. For a game that seems designed to be played in short bursts with a partner or a small group of friends, it’s a frustrating feature.

I wanted to like Date Night Bowling so badly. Its pixel art is very well done, not to mention super cute, and the concept of a dating sim combined with a bowling sim sounded fun and novel. My troubles with the bowling mechanics, the confusing UI, and the amount of time I spent unlocking characters all detracted from the experience enough that I can’t imagine bringing this game to parties.

There’re solid game ideas here, and I hope that Serenity Forge’s next title will bring all these elements together. But for now, while Date Night Bowling isn’t rolling complete gutterballs, it’s not bowling any strikes, either.