Crimsonland is an ugly game. Even though this is an HD update of the 2003 PC version, not a lot has changed. It looks painfully generic when placed side-by-side with more recent twin-stick shooters like Time Recoil (also developed by 10 tons) or Geometry Wars 3. But while the graphics won’t turn any heads, Crimsonland does at least offer up a satisfying arcadey experience that is as addictive as it is bloody. It can grow tiresome after a while, but it’s a fun distraction if you only have a few minutes to kill.

It’s an excellent port for Switch owners too, even if there isn’t much new here at all. A nice but otherwise forgettable addition is local co-op for up to four players. As you’d expect, rounding up some buddies and blasting away hundreds of creatures on screen definitely makes for a good stress-reliever, but its novelty doesn’t last long. It’s also a bit of an eye strain if you’re playing in tabletop mode with everyone huddled around; it’s doable, but I recommend playing on the TV.

Like other twin-stick shooters, Crimsonland doesn’t mess around with complex controls. So long as you can move with the left stick, aim with the right, and shoot with ZR then you’re good to go. All you have to worry about are the hordes of spiders, zombies, and other grotesque monsters that like to go splat when pierced with bullets.

“As you progress, more weapons and gameplay perks are unlocked which add a level of variety and unpredictability to Crimsonland that I appreciated”

There are two modes of play: a by-the-numbers campaign called “Quest Mode” and a Survival mode. By cruising through single-player, additional survival modes are unlocked, providing a bit more longevity. Truthfully, some of the new modes just aren’t worth it. Like Rush, for instance, which limits you to just an AK47 to mow down waves of monsters coming from all sides. With no perks or bonuses dropping, it’s very difficult to last longer than a minute, which immediately saps all the fun away. The same can be said for Weapon Picker, in which weapons have limited ammo. You’ll need to navigate through the horde to the next random weapon if you’re hoping to survive. While these new modes are fun for a short while, I’d suggest sticking to the traditional survival mode which turns the core Crimsonland gameplay into an endless, murder-thon. 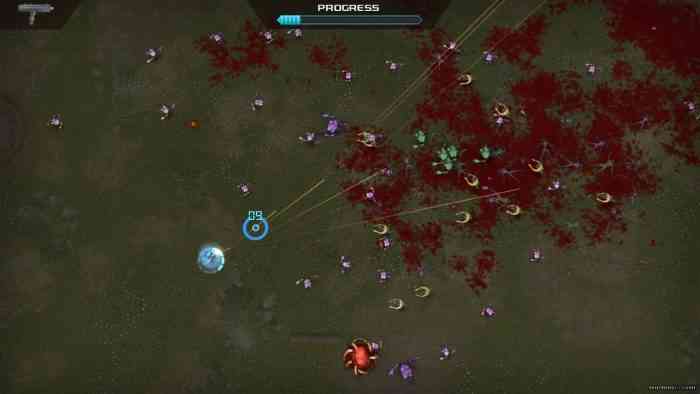 The campaign is divided into six chapters with ten levels apiece. Each level is short, so they’re perfect for quick bouts of shoot ‘em up fun. As you progress, more weapons and gameplay perks are unlocked which add a level of variety and unpredictability to Crimsonland that I appreciated. Weapons come in all shapes and sizes, from your standard pistols, shotguns, and rifles to more abstract ones like pulse guns, ion rifles, blow torches, and more. There’s a slight learning curve with each one, but you’ll soon discover which weapons work best on specific enemies. There’s no need to conserve ammo but you’ll still need to keep an eye on reloading. Additionally, creatures will drop various power-ups which are used instantly. Powers up like Freeze (enemies are frozen for a short while) and Firebolt (a rotating ring of fire) can really turn the tide in your favor when the action heats up.

At the top of the screen are two progress bars: one that indicates how many more waves of enemies there are, and one that levels up and earns you a gameplay perk. There are over 50 perks in the game and in many cases, they saved me when I was in a pinch. The faster you can obliterate your foes and cover the floors with the red stuff, the quicker you can choose a new perk. These are a lot of fun to experiment with and I didn’t mind selecting a few that would otherwise put me at a disadvantage or make the game more challenging. On average, I’d place my bets on perks that leaned towards the offensive like faster bullets, no reloads, or even uranium-filled bullets that would cause an explosion of guts and crimson red (ah, so that’s why it’s called Crimsonland!). There’s a nice element of strategy and balance when choosing your perks. If you play your cards right, you’ll fly across the screen wiping out anything that comes remotely close to you. On the other hand, a bad hand can result in a quick death. Luckily, levels in Crimsonland are short, so it doesn’t feel like much of a setback if you fail. 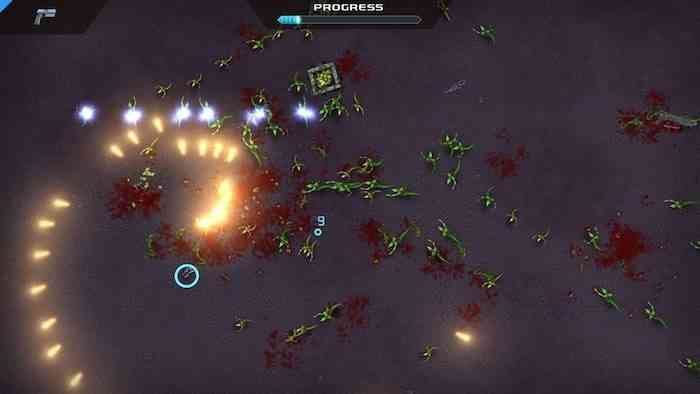 At first, I found the perk selection screen to be a bit obtrusive. Just when I would get the upper hand, gameplay would stop and force me to choose one of four perks before continuing. Considering that most twin-stick shooters are all about quick reflexes and precision aiming, the decision to pause everything felt at odds with its gameplay. But after awhile, I grew to appreciate it. It was a chance for me to catch my breath, chuckle at a few of the descriptions, and plan my next moves accordingly with my selection.

Crimsonland is a total guilty pleasure. It doesn’t look all that hot; the action is silly, loud, and dumb; but its quick and dirty gameplay is, most importantly, fun. The over-the-top violence and gore are second to its surprisingly rewarding weapons and perk system. It elevates Crimsonland, ever so slightly, above other twin-stick shooters with a layer of depth I did not anticipate. However, its muddled presentation is hard to ignore and the actual campaign is pretty dull. Underneath is an addictive and entertaining game, but you’ll have to wade through the ugliness before it’s revealed. It’s a mixed and bloody bag. 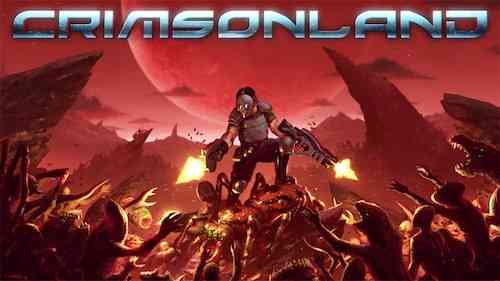 Another F-Zero Game Is Possible, Says Ex Nintendo of America Boss
Next Sphinx and the Cursed Mummy Review – Back From the Dead
Previous Pokémon Ultra Sun And Moon Review – A Good Game Made Better