Corpse Party: Book of Shadows Review – Not Worth The Read

Visual novels sit in a difficult spot in the video games industry. The unsophisticated gameplay and abundant stereotypes attached to the genre often lead to the games being outright dismissed. Every once in a while, you’ll find a game like Doki Doki Literature Club that comes around and brings a bit of attention and even respect to the genre. Unfortunately, these are rare, and you more often find games like Corpse Party: Book of Shadows and failing to change any minds.

Not having played the first Corpse Party (and I remain uncertain of how important that is), I will say that I came into the game a little bit unsure of what to expect. I’m unfamiliar with the rules of this world, and so the early dialogue, which doesn’t seem overly concerned with bringing new-comers up to speed, offers me new information that I don’t know how to receive. After playing for a few minutes, though, it became clear that the story could be understood with only the context coming from this game and not from the original Corpse Party.

Because of that, and because I haven’t played the original Corpse Party, I will be judging this game on its own merits, and not on the original. I also want to say that, although I would like to avoid spoilers, some of my points will require examples. As a compromise, I will only be using examples from the first chapter of the game to provide them, though my points will be related to the game as a whole.

Before I lay into Book of Shadows, I want to discuss what was done well in the game. The music is pretty solid, and it adds nicely to the atmosphere. The sound effects are equally well implemented, adding some depth to the visual novel format. Some dialogue and sound effects even make use of different left and right audio channels, which I haven’t seen many visual novels do. The art for the game is overall pretty effective at creating an strong atmosphere. Unfortunately, even my praise has to come with a disclaimer. The audio levels are atrociously inconsistent, and led me to constantly change my volume. It’s been more than seven years since this game first came out, and a glaring audio level issue was left untouched. With that, I guess it’s time to move into discussing the game’s big issues.

The Scariest Part of All…

Let’s start with the writing. Visual novels live and die on their writing. Without intriguing gameplay to draw the attention of players, whatever is put in the text bubble is what’s going to be holding or losing the player’s interest. I will say that the game, especially the first chapter, was eager to grab your attention. I’m not sure what the point was of having two girls taking a bath together in one of the earliest scenes in the game was for if not to grab a player’s attention.

It really came out of nowhere, too. Somehow, a standard introduction of two school friends led VERY quickly into a sexually-charged homoerotic bath scene, which led into a slightly less sexually-charged bedtime scene. From there, things just continued with sexual…tension? Not even. There are a couple other moments of borderline sexual misconduct, but after that, this sexual theme is dropped. This subplot is almost totally unimportant. What’s really unfortunate is that the disappearance of that subplot did actually lead the game to struggle holding my interest. 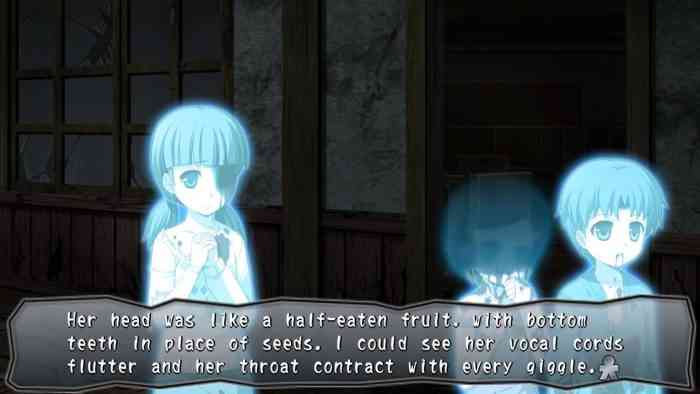 The writing fails to develop suspense. Near the beginning of chapter one, after first appearing in the scary school with no idea what’s going on, the events that follow are just briefly mentioned and summed up: some of these interactions are summed up despite clearly having a major impact on the protagonist. We spent more time in the bath than we did seeing what generated the primary conflict of the first chapter. This is a problem.

There’s a lot in the game that breaks up the tension and fear that needs to be building for the game to be effective. The translations in some of the moments of tension are too literal. They take a moment that should be nerve-wracking and take you out of it, making you think about the oddity of what’s being said. This can include describing the displeasure of vomiting using technical terms like “gastric.” It sounds silly, even trivial, but these instances break up the flow and pull you out of the experience in a pretty tone-damaging way.

The protagonist also constantly reiterates how frightened she was by certain events. Being told about how these events scared Naomi (the first chapter’s protagonist), or being told how she was losing her mind, aren’t scary in and of themselves. Let the player experience what needs to be experienced to be frightened. Leave the rest up to the imagination. A little bit of mystery is nice. We don’t need to know how Naomi explained to herself why the door might have closed behind her, especially after being told that she was losing her mind. Having the scene described in fashion totally contrary to the image we’re being shown is also annoying.

So much of the conflict is simply talked about with no actual player action being necessary. The first chapter has a series of instances of razor-sharp wire that Naomi has to avoid. She seems to be very wary of this wire, but the player doesn’t have any control over how she interacts with it. As a result, there’s no tension. Just because a situation seems treacherous doesn’t mean it’s actually treacherous. There’s also the issue of seeing Naomi struggling with a decision about what to do, but the player being given absolutely no choice in the matter. Why mention her internal struggle if the player is given no say it how it develops? This is frustrating in a genre where the primary source of interactivity is supposed to be making choices.

Very few player actions actually impact the story in any meaningful way, and there are few player actions to begin with. Most of the endings, regardless of your decisions, will remain essentially the same, only framed differently. Some endings require that more specific events take place, but even those with more complex requirements often still result in the same character deaths.

I’m about to spoil the ending of chapter one. If you are okay with that, read on. If you’re not okay with that, take solace in the knowledge that you can’t change it, and read on anyway. There are three endings to the first chapter, with the player’s choices deciding which ending they get. However, in the first chapter, all three endings result in the same character dying regardless of the player’s attempts at intervention. There’s no real reason to feel anxious about your decisions. The total lack of happy endings (save for one chapter) means that whatever you choose is either going to backfire or have far less consequence than it probably should. Once this has pattern has repeated itself several times, the choices are no longer suspenseful.

Corpse Party: Book of Shadows is, quite frankly, unremarkable. It’s not atrocious enough for me to say that I hated it. I didn’t hate it. If you’re a hardcore fan of visual novels, you might not hate it. However, I certainly wouldn’t recommend that you seek it out.