Conception Plus: Maidens of the Twelve Stars Review

Conception Plus: Maidens of the Twelve Stars is not as strange as it sounds. Sure, you are the sole male chosen as “God’s gift” transported to another world and your mission is to bond with twelve beautiful maidens to create magical children to save the day, but there is more to it than simply dating and saying the right things. Surprisingly, the RPG involves a good amount of strategizing and grinding – and no, we don’t mean grinding literally. While Conception presents an exciting idea to a niche audience interested in harem JRPGs, it’s still easy to pick up for regular players and is not a bad game at all. The only problem is it’s not a great game, either.

The storyline is not complicated and feels mostly directed towards being surrounded by twelve beautiful maidens. In the world of Gravania, there lies impurities which can only be defeated by God’s gift (you) and his children. This is where your maidens come in – each maiden corresponds to a star sign, and by performing a “Classmating” ritual with them you can create Star Children. These Star Children will then take on whatever class you would like to assign it, be it a Fighter, Thief, Magician, Cleric, Archer…the list goes on. You bring your children into Labyrinths to fight enemies, and once they max out their levels you can set them free into the city to help make it a better place. In order to create stronger Star Children, you will have to deepen your bonds with each maiden by conversing with them, giving them gifts, and making sure they stay happy with you.

Conception is an interesting JRPG that is much more than just courting women and creating children. There is strategizing involved when you prepare to fight enemies inside the labyrinth, which actually makes the bonding aspect of the game relevant. As different maidens provide different strengths, the children you conceive with them can exhibit traits of higher Attack power, higher Magic Defense, and so on. The children can also hold different elements like water and fire, take on different roles, contribute to society, and much more. With a turn-based battle system, you get to control all your parties during a fight, so it is still important to have a good balance of Star Children in each party. You are allowed to bring three parties with you, with each party containing four children. As they work in teams, you can manually switch out children from time to time or have the AI recommend which combination of children is best. When your children have maxed out their levels, they can become too weak in comparison to the monsters that appear later on. Luckily, we have the option of setting them as Independent, where we let them enter the city and help out with opening shops and unlocking parts of the town.

Even though Conception is made for mature audiences only, there seems to be a lot of censorship that occurs especially during some animation scenes. While this isn’t an issue, the fact that some parts were covered up makes the story a little hard to follow. The characters were always dancing around the idea of conception and this being their “first time”, but the animation during the ritual is only showing the silhouette of the maiden, and then her joining hands with the male protagonist. The last time I checked, holding hands didn’t suggest censorship, making it confusing as to what actually happens during Classmating.

One of the minor gripes I had with the game were the maidens’ appearances. No, they weren’t ugly, but rather I was put off by the age they appeared to be in the game. While nothing sexual really happens in the game, it still felt weird for me to approach a young girl and get her to like me so we can create Star Children. I mean, looking back at it, at least half of the characters were probably underaged to begin with. It also didn’t help that some censoring during animation scenes made it appear like something more was going on. Even though the idea of the game is to deepen relationships with maidens to create stronger children, it still felt strange to make a 12-year-old girl (who’s probably 18, but this is anime) blush. 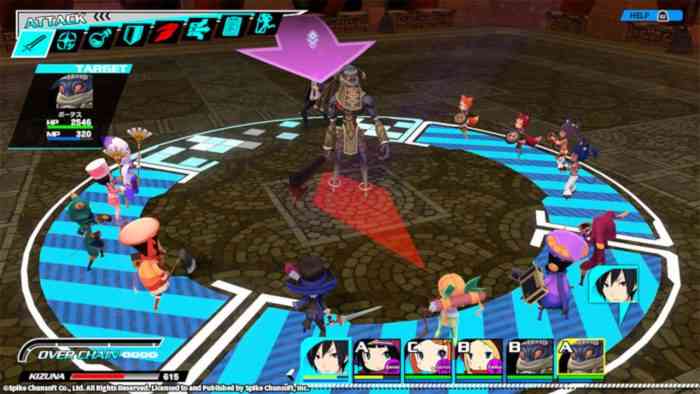 Once the novelty of it all wears off, Conception doesn’t provide much else to keep you excited and involved in the game. Much like other JRPGs where you grind, level up, and strengthen your bonds with other characters, Conception doesn’t bring us more than that. The storyline wasn’t very eventful and the pacing was slow, whereas the gameplay became repetitive after the first few hours. It is still a solid game with enough content to keep you entertained, but besides having to create and customize your party members there isn’t much else that keeps it appealing.

Conception is a unique game that makes me appreciate the wild ideas that JRPGs can come up with. Definitely targeted to a niche audience who enjoys the idea of courting twelve beautiful maidens with the prospect of saving the world. Conception is not a revolutionary JRPG, nor is it a stimulating dating SIM. It is a strange concept but for the purpose of the game, it works. While the storyline could use a little more excitement to keep players hooked, it is definitely worth trying if you have an interest in harem RPGs.