Just hearing the title Coffee Crisis, you’d be forgiven for assuming that this game is a restaurant sim in which you prepare and serve cups of joe to impatient coffee-shop patrons. No, in this case, Mega Cat Studios has served up more of a 90s-style beat-em-up for Switch fans, a side-scrolling action game in the style of the old SEGA Genesis classics like Golden Axe. Playing the game, I was personally taken back to my many, many hours of fun playing Double Dragon in the gelato shop near my school when I was supposed to be in Math class. And that is a good thing (the Double Dragon part, not the skipping Math part).

The story is cute but minimal – the evil alien Smurgliens have invaded Earth to steal our Heavy Metal music, our cat videos, our WiFi, and of course our coffee – apparently these are the only valuable things they feel we have to offer. Nice. Based on that brief but certainly adequate premise, caffeinated barista heroes Nick and/or Ashley (you play as one or both if it’s Co-op) embark on a Metal-fueled quest to save us all.

There’s a lot of love shown in Coffee Crisis for those old beat-em-ups, and for video games in general. The look and play-style is dead-on, and I swear I even saw those same whip-wielding S&M ladies from Double Dragon at one point. Your move set and the 2.5D scrolling environment are all pretty much the same as well – my limited attack choices with Nick were punching, jumping, kicking and swinging a bag of coffee beans, all using different buttons. Enemies come at you from either side as you move, and you’ve got to be careful to keep moving up and down so as not to get surrounded (which you do anyway).

Make It A Double-Double

The gameplay is nostalgic fun for a time, but too simplistic to sustain prolonged sessions. The combat is retro-faithful but shallow by today’s standards. There is a power attack, and that’s fine, but I found that it too long to wind up, leaving me vulnerable to enemies. Thus, I found button mashing to be the way to go after a while, and that’s not ideal. Enemy variety is also limited, so most of the time you’ll be doing the same thing, with the same enemies, which gives the game a repetitive feel. 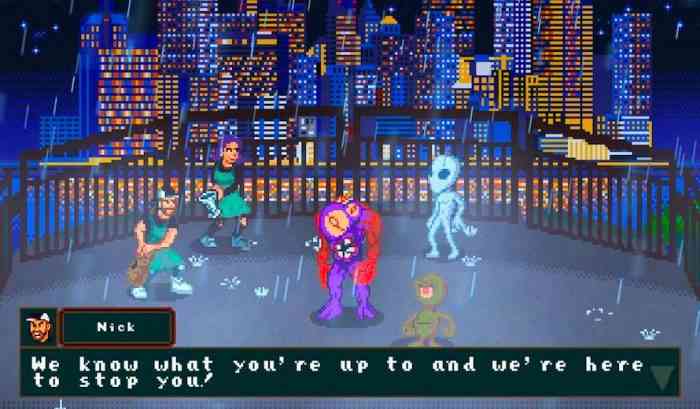 Coffee Crisis is hard, even on “easy” settings. Enemies come at you from all sides, and I got swarmed quite a bit with no way of fending off crowds without taking massive damage. And that’s not even mentioning the game’s ultra-hard  “Death Metal” mode, which I never had the cojones to even try. In fairness, it is meant as a Co-op game, but after playing in single-player mode I began to feel like it almost must be played co-op. It is simply to difficult for one player to make much headway, especially as the levels progress. You can certainly play Coffee Crisis on your own, but you’ll spend a lot of frustrating time replaying levels to have individual success.

What really stands out in Coffee Crisis is the look and music. Mega Cat Studios really nails the colorful sprite-based look, making full use of perspective and smart design to both emulate the Double Dragon days, and give your eyeballs something new to enjoy. Humorous little details abound, such as the crazy homeless guy with the tinfoil hat narrating the “story,” or the walkers used by the possessed old men attacking you. To top it all off, the head-banging metal soundtrack punctuates the brawling action perfectly – all created using the 90s-era video game sounds.

There’s definitely lots to like about Coffee Crisis, and its developers deserve credit for recreating the 90s brawler with near-perfection. If you have a nostalgic yearning for some retro fun, and especially if you’ve got a buddy who can help you kick some alien ass, Coffee Crisis is one cup o’ joe that’s worth a sip. On your own, however, it might be a bit more frustrating and simplistic than you’d like at times, and your initial caffiene-high of enjoyment might wear off quickly. Either way, though, make sure you keep the lid on your coffee mug because the bangin’ metal tunes will have you pumping your fists as you play. 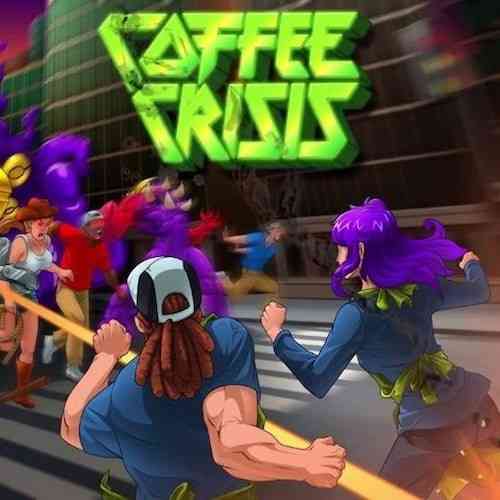