If separating sewage, putting out fires, and having a whole population of people gripe at you over social media about how no one from the crematorium has picked up their dead grandma yet sounds like the ultimate gaming experience to you, then boy, are you gonna love Cities: Skylines.

For a while now, I have been eagerly awaiting a decent city-building game to play on the go, but I doubted the possibility that something so large-scale could ever be squeezed onto the handheld Switch display. It seemed counterintuitive that a game with so much action, chaos and space could be ported onto such a bite-sized console, but after firing up Cities: Skylines and pushing past the minimal tutorial, I was thoroughly impressed and satisfied with the adaptation — and frankly, grateful for its surprise release last week.

For those who are unfamiliar with the game, the only premise is to build your very own city from the ground up and keep it running as efficiently as possible. This means taking the needs and safety of your people into account, expanding your city and making use of different resources and services. There are no scenarios or challenges; just a big sandbox where you can let your creativity flow.

While I was skeptical about being able to see and manage everything going on in the booming metropolis I set out to build on the small Switch screen, my fears quickly faded away. The camera is smooth and speedy, which means zooming out and scrolling over to different pockets of your city never takes more than a second, and the symbols flashing over buildings and infrastructure indicating different technical issues are scaled nicely as well. 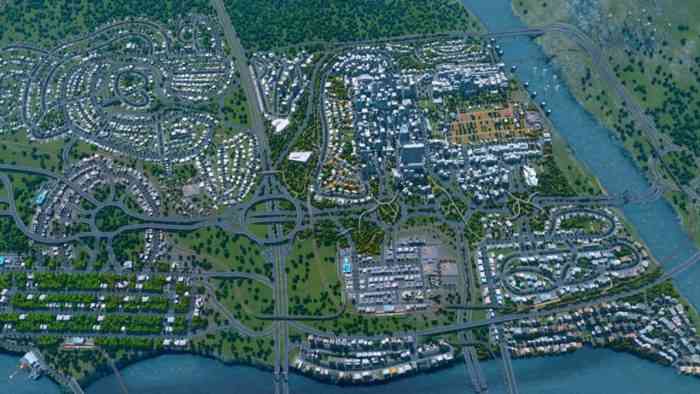 I found the controls easy to use and very intuitive, though it takes some time to get used to due to the sheer amount of menus and options. You can cycle through different tools and sectors such as Fire Departments, Electricity or Zoning using the D-pad, and flip through subcategories in those sectors or tabs in the informational menus using L and R.  Zooming in and out is achieved by intuitively pressing ZL and ZR, cancelling actions is done with B, and radial menus are pulled up with Y.  Should you find these controls not to your liking, the layout can be changed in the Options menu.

While most of the mechanics feel pretty seamless, there are many nuances in the game that aren’t made clear from the beginning. The display is constantly brimming with pop-ups and dialogue windows, but it seems that only a fraction of it is actually helpful.  Beyond building a basic road and learning that power and water are necessary to keep the city running, there are no significant tutorial steps that explain the complex and delicate balance between industry and commercial businesses or reveal why all of your buildings are always abandoned. The game will not explain to you what happens when too many citizens become educated or about imports and exports. Hell, it won’t even explain how to best plan for industry specializations. This is just stuff you learn on the job.

Cities: Skylines conquers most aspects of city planning and building masterfully, but there are still a few components related to construction that I found deeply frustrating. The main thing that springs to mind is the tiresome process of adding public transportation lines — when you place bus, train, tram and metro stops, it is very difficult to be precise. Often, you will accidentally place a stop on the wrong side of the street, thus creating a weird and inefficient route around the block to get to this stop. With no simple “Undo” feature available, you end up with one of two choices: open a few menus, filter the map to reflect transportation info and manually pick the line you screwed up from a list (which can sometimes prove challenging as the lines are never sorted in any reasonable order), and either delete the line entirely or dick around with the “Drag Stop” option. Hint: You will probably have an easier time scrapping the line and building it from scratch again.

Not only are these consequences to placing accidental stops, but other unpredictable scenarios can also force you into this cumbersome editing process. For example, if your city levels up mid-transportation line building, the milestone screen will pop up and halt your process, thus putting you in the position of either trying to drag the stops in order to complete your line or starting all over again. You’d be surprised how often something comes up while you’re building transportation lines, and how hopeless it is to try to continue adding stops once you have been exited out. Issues with editing and creating transportation have been present since the game launched years ago on PC, and it is evident in the new Switch version that these problems were never improved upon.

Transportation is not the only area where precision is challenging. Adding features such as roads and power lines is tedious at times due to the lack of control over the joystick and the absence of a cursor. None of these are deal breakers, so much as simple annoyances that could have been refined pre-release, and after a few hours of playing you’ll get used to how to work around (or at least anticipate) the precision issues.

When it comes to performance, I feel the game deserves a pat on the back. No, it doesn’t run perfectly at all times and the graphics are definitely less beautiful on the Switch than on previous consoles, but it’s about as nice as you can hope for. Cities: Skylines is detailed in very microscopic ways that can only be observed and appreciated when super zoomed in, and it’s understandable that the frames get a bit choppy when the city gets big and chaotic. I wouldn’t punish the game entirely over this, as I went about 20 hours into gameplay and hardly noticed any discrepancies.

Overall, Cities: Skylines’ technical performance is not completely top-shelf, but it gets the job done. I rarely noticed choppy frame-rates, and bearing in mind the console we’re working with, I’d say a massive feat like porting a complex city-builder deserves some credit.

Of course, the mechanics require a little patience when trying to place things perfectly, but for the most part, I was impressed at how natural the controls felt in relation to how many actions and menus there are. If you have the option of purchasing the game on another console and you plan to keep your Switch docked most of the time, then the game’s performance and graphics would likely be better served on another platform. However, if the Switch is the only console you own or if you fancy the idea of having one of the best city-building games on the market at your portable convenience, I would definitely recommend the buy. It is as good as anyone can expect a game this busy to be on Nintendo’s travel-friendly console, and I can genuinely say I anticipate its company on many more plane rides and commutes to come.

***Nintendo Switch key was provided by the publisher***