Capcom’s known for a lot of popular titles. Megaman, Monster Hunter, Resident Evil, you name it. They continue to be a heavyweight in the game industry to this day, but they also have a lot of history beyond the living room. Capcom also made a number of incredibly memorable titles you’d find in your local arcade, and what better way to bring them to the public then with an Anthology of sorts that provides you with a few hidden gems as well? The Capcom Beat ‘Em Up Bundle provides many trips down memory lane, but there are also some new faces that make this title worth your time.

The Capcom Beat ‘Em Bundle serves up seven mostly excellent titles, with a few stragglers. Whether it be due to age or just lackluster design, not every title is a winner. Fortunately, the majority of them are just as fun to play as they were back in the day, and the two exclusive additions, Battle Circuit and Armored Warriors, are both arguably some of the highlights of the package, featuring surprisingly deep combat for a genre that boils down to beating up everybody and walking right, then doing it all again. The games in this package are just so satisfying to play though, with that crunchy, bit-crushed audio that just feels good to hear. The games have a surprisingly robust bit of tweaking to them as well, allowing for extra-life thresholds, English or Japanese versions, Extra Difficulties, and even the amount of starting lives. Capcom could have just slapped these games together as is and called it a day, but the added customization is quite welcome. The bundle’s also presented with a nice bit of polish, featuring a trove of high quality scans of concept art from each game in the pack if that’s your thing, but you’re not here to read about pictures, you want to know how it plays.

Veritable Blast From The Past

The majority of the titles included in the Capcom Beat ‘Em Up Bundle have aged very gracefully, and are still a blast to play. They each feature a diverse cast of characters, along with excellent music to back them up as they proceed to kick ass across each screen.. Some of these songs are downright iconic, and hearing them again after so long is a treat. I don’t know how much I can really talk again about games like Final Fight and Captain Commando, because let’s face it, they’re exactly as you remember. They are some of the best in the genre and are still a riot. Knights of the Round and The King of the Dragon are also still surprisingly fun, considering they weren’t quite as common as the former pair. One title I found myself not quite liking as much was Warriors of Fate, mostly due to how floaty the game felt compared to the others. Where Warriors of Fate differs from the others is how surprisingly violent it could be. Everyone from common mooks to the bosses in each level can be veritably disassembled, which is fitting given the time period it is set in. It’s by no means a bad game at all, either. I enjoyed Warriors of Fate, but it ultimately didn’t really blow me away like some of the other titles. That aside, the major draw of this package (or so I hope) for a lot of people will be the chance to finally play two arcade exclusives in Battle Circuit and Armored Warriors, two titles that I immediately fell in love with.

Battle Circuit is probably the most over the top of the bundle, next to Captain Commando. Set in the usual year of 20XX, which seemed to be a pretty busy/chaotic year for the Capcom crew, tasks you with recovering a single floppy disk that could bring down the entire world in Y2K-esque fashion. The “Delete Gang” have stolen it, and it’s up to Cyber Blue and his compatriots, which includes a kid on an ostrich, to get it back. Across each level, you’ll rack up coins for pulling off combos, with the chance of using them to purchase additions to your movesets. Each character gets to use ranged and close combat techniques, and also has a “Battle Download” which essentially puts them into overdrive, letting you really lay the hurt on the Delete Gang and other increasingly bizarre enemies. It’s nice to see that even back in the day, a genre as simple as Beat ‘Em Ups were still seeing so much creativity, and it helps that it’s got a pretty stellar soundtrack composed by the legendary Syun Nishigaki. 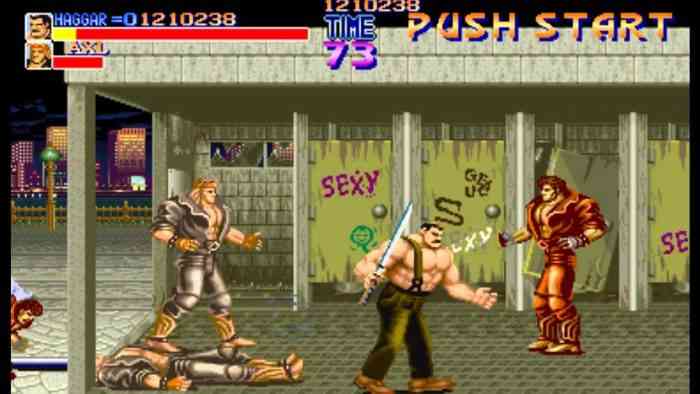 The other title in this rare duo is Armored Warriors, and it is also equally enjoyable, but for slightly different reasons. Taking place in the year 2281, and giving 20XX a rest in the process, the earth is in peril after a ceasefire seemingly is interrupted by a more sinister force. Jumping between both Earth and Raia, your former enemy made ally, you’ll pilot a massive mech that gets to augment their frame with all sorts of weapons and body parts, allowing for some pretty diverse combinations that let you slash, slam and shoot everything in your path. There’s a nice bit of variety to the weapons you’ll find, so there’s plenty of incentive to mix it up. I’m willing to look the other way with Capcom for holding out on giving us this one for so long, as it too is a genuine treat to play and shows why Capcom had set the bar so high with this genre.

Another feature in the Capcom Beat ‘Em Up Bundle, one that I’m admittedly disappointed by in its current form, is the addition of online co-op. The local co-op is a blast to play, and works like a dream, especially on a platform like the Switch where two sets of Joy Con is enough to get you and two or three friends in on the action. The times that I did try to join in online though, were met with pretty horrendous lag, and I can’t imagine it terribly difficult to render this amount of action in this day and age, considering we have way more hectic titles that run a lot smoother than this did. That being said, the times it did work were great, and the co-op gameplay is just as solid as it is locally. Being able to drop-in from my own home and join someone else’s game reminded me of the days of hopping into a vacant seat in the arcade and plowing through a game with a total stranger, and it felt pretty cool.

It’s almost mind boggling to me that Capcom didn’t try and price this higher, but it’s right in line with their other recent collections they have dropped, and for what you’ll pay, this is arguably a steal. Beat ‘Em Ups aren’t known for their replay value, but I guarantee that unless you’re some kind of savant, you’d spend more in quarters trying to beat each of these games than what you’ll pay for it in its current form. The Capcom Beat ‘Em Up Bundle is another welcome feather in the cap that is their redemption arc that we’ve been seeing in 2018, and if you’re dying to knock heads with Mayor Haggar or rack up some coin with the crew of Battle Circuit, this is an excellent reminder of why Capcom did so much for this genre. Here’s to hoping we’ll see another collection that features some notable missing names, like The Punisher or Cadillacs and Dinosaurs. 2018 Capcom, please keep it up. We like you a lot.

***Switch key was provided by the publisher*** 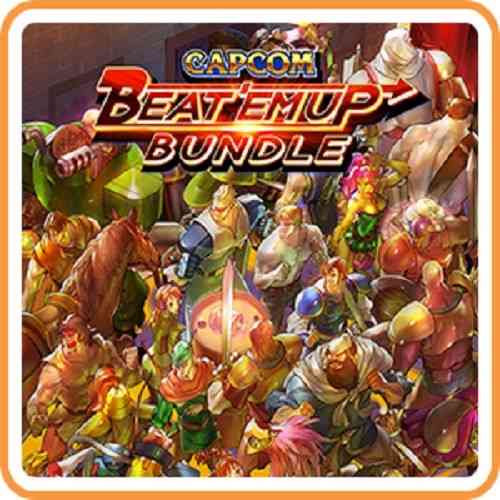