Cel Damage HD the first game from indie, Toronto-based developer Finish Line Games. Remaking Cel Damage sounds like an interesting choice for a first title. That is until you realize that Finish Line is led by some of the developers of the original game. The original game didn’t fare overly well with critics with scores on Metacritic peaking in the lukewarm mid-sixties. Cel Damage is a faithful re-creation of the original with the addition of a new spin on a key element and a few nice features that add some nice bang for your buck. Yet the whole things feels just a bit underwhelming.

The premise of Cel Damage HD is simple. Perhaps too much so. You take control of various characters and race through three types of events within the setting of a cartoon TV show. It instantly reminded me of that old Saturday morning cartoon Wacky Races. There are but three game variants including checkpoint races, capture the flag and death matches. By today’s standards the game play is somewhat vanilla, especially when playing alone. There is no story or campaign mode. You simply choose the event type, character, location and track and you’re off.

The game runs at a silky smooth frame rate on both the PS4 and Vita on which I played (I can’t imagine the cel-shaded art style is all that taxing on the hardware) and the controls are appropriately responsive. With the basic attack and boost buttons mapped to the face buttons Cel Damage HD is simple to pick up to play. On easier difficulty levels you can get by with using just the basic moves. More advanced moves that help evade attacks and improve your vehicle’s performance are mapped to the right thumb stick. These moves become critical to one’s success on higher difficulty settings and, if mastered, should serve the player well during four person multiplayer sessions. 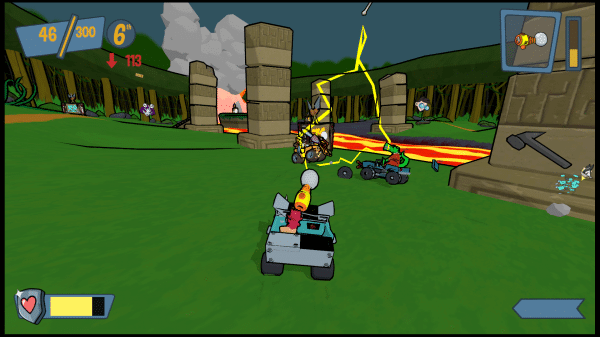 The most significant change from the original game is the move away from one hit kills. Now players take damage and only re-spawn when their health meter is depleted. This has certainly left some fans of the original concerned. I don’t share the same concern. Unlike Mario Kart’s power ups that are generally one shot per power up the weapon types and ammo bars here actually lend themselves to having a damage meter. Otherwise I can only imagine the re-spawns would be so frequent they’d kill the fun! First aid stations smattered throughout levels allow players to replenish health and add an additional element to the strategy.

A natural assumption would be than any modern day “HD” game remake would include some form of online mode. Strangely there’s none here. Instead Finish Line have opted for split screen local multiplayer for up to four players on consoles (sorry Vita players, solo play only). This type of multiplayer harkens back to the days before online gaming. Its not a mode I’m going to get much use out of (I simply don’t play a lot of local multiplayer with friends) but I can see the fun playing with a few buddies and beers. The simple pick up and play style may also appeal to younger/family players too.

I think we’re reaching a point where artistry trumps raw graphical power in today’s games and Cel Damage is a good example. There’s no fancy textures, lighting or massively detailed character models but the cel shaded graphics still look fresh. The visuals in Cel Damage remind me of a Flintstones show a little bit. The sound side of things doesn’t fare as well as the visuals. The music and the effects are fine but you can tell this was a game that was developed at a time where voice acting wasn’t yet as paramount as it is today. 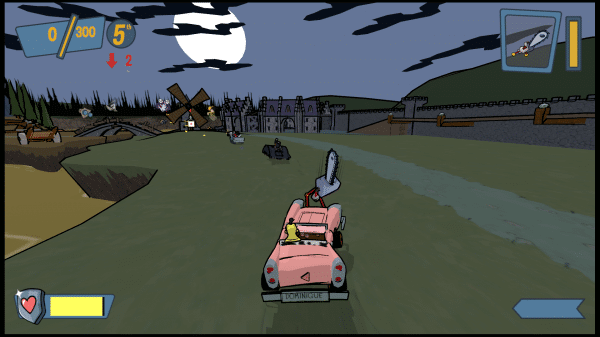 Cel Damage HD is also a cross-buy title. This means that you have access to it on a PS3, PS4 or PS Vita for one price. There is also cross-save functionality. Being able to relatively seamlessly take your game from console to handheld and then back is something I absolutely love. Both of the features add good value to your purchase if you own both a PS3 or PS4 console and a Vita.

Remakes of games are tough to score. Without major changes, a remake of a mediocre game is only going to score so well. The source material being what it is, Finish Line has done well. They’ve added a new interpretation into their game play that improves the flow and the cross-platform and cross-save options only add value for owners of various Sony consoles. Online play would have been nice but, still, a worthy effort.