CastleStorm (PC) Review – Looking for Something a bit Different?

I will be honest, tower defence games bore me to tears. I usually find them tedious, frustrating, and at times downright overwhelming. At first glance Zen Studios latest game, CastleStorm, seems like yet another tower defence. Two opposing forces square off against each other defending their castle from waves upon waves of enemies who are making their best attempt to steal each other’s flag. That being said, this game is not what it seems as its looks are quite deceiving. There is so much more here, with elements of real-time strategy and role-playing games, making a CastleStorm surprisingly complex game.

There is really not much of a story to speak of and what is there is somewhat forgettable, although the sequences between levels are somewhat humorous.  The gallant Sir Gareth sets out on a quest, seeking to return a precious gem stolen by a dastardly group of Vikings. The goal in campaign is to simply destroy the enemies castle or steal their flag, all the while protecting your own, Equipped with a ballista, which is a catapult type weapon, players can hurl a variety of different projectiles at the approaching enemies and the other castle, with hopes of destroying it to rubble.  Arrows, spiky balls, exploding apples, even sheep are flung through the air in an attempt to stop your enemy in their tracks.

While the ballista is used as the primary attack you also have access to an army of troops to use against the barrage of enemies wreaking havoc on your castle. Archers, knights, and even donkeys can be recruited to devastate your opponent. To support your units there are a number of spells that can be used in battle, which give performance bonuses and healing. As well, there are heroes to unlock and equip, including Sir Gareth himself, which you can briefly teleport to the battlefield and use their brute force against the onslaught of Vikings attempting to steal your flag. 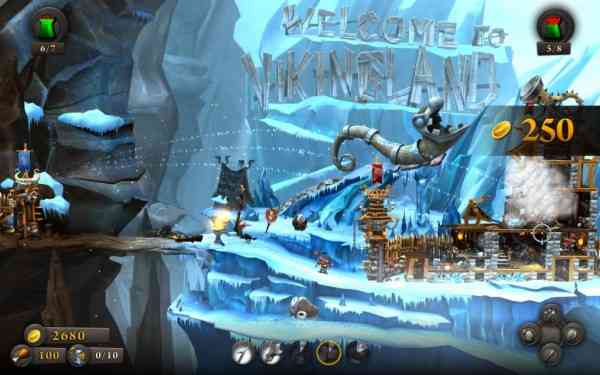 Weapons, spells and units all have a cool down period, which you will constantly be watching, adding a bit of micromanaging to your gameplay experience.  Your basic weapons recharge quite fast, while power weapons and spells recharge notable slower, although levelling each ability will reduce this recharge time.  Managing troops, your hero, watching the recharge on your spells and weapons and manning your ballista, all of these things have a tendency to get a little crazy on the battlefield. Admittedly I was a bit overwhelmed at first. There is a fair bit of strategy involved, and a bit of a learning curve, but once it all comes together, it works quite well once you get used to the controls and managing everything. Thankfully, the first few levels offer somewhat of a tutorial mode to help you get into the swing of things. Speaking of the controls, they are quite simple to master, although I did find the ballista a bit tough to maneuver at times, and some of the key bindings felt a bit wonky

The construction of your castle can make or break your chances of winning a round. There are some perfectly fine pre-made castles to get you through the game that are quite effective, but a very nice addition is the option to customize your own in the castle editor. Adding rooms to your castle gives you access to different types of units and adds passive bonuses like food supply (which is needed to replenish your troops), unit size, and other such perks. The design and defensiveness of the castle is quite important because once destroyed you lose access to these bonuses and units. You can however test it out before venturing into battle to see how effective it will be against your foe’s projectiles.

In the campaign you face a variety of different scenarios.  Each mission has a primary mission and a bonus mission, like killing a number of troops or avoiding any damage to your castle. Before each mission there is a battle preparation phase where you can equip different projectiles, level up your troops and select what spells to use. Gold coins are rewarded at the end of each level depending on performance and they can be used during the battle preparation phase. In addition to the campaign, there is also single player skirmish, survival, and hero survival modes, which offers hours upon hours of replay value. 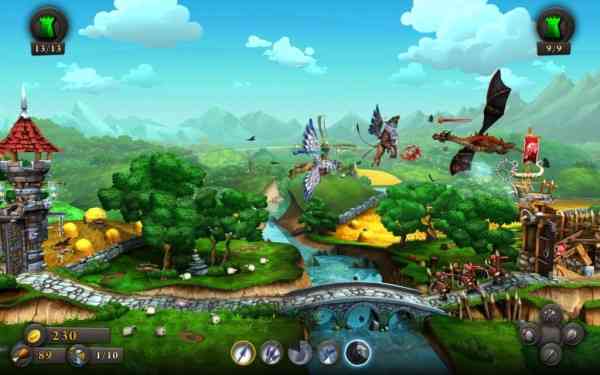 CastleStorm, in my opinion, is best played with a friend, and there are three multiplayer modes that can be played locally or online. Play against each other in a standard versus mode, or team up in Survival, where one player uses the ballista, and the other player fights as the hero on the battlefield. This mode was rather frustrating at times, particularly the difficulty level, as well as the friendly fire. I often found myself hitting my co-op partner with my projectiles, damaging him more than the enemy, as he was in the midst of a group of troops. It was difficult to avoid hitting him, but perhaps this was due to my skill level. Of the three modes, I really enjoyed the Hero Survival mode where both players use the special hero units and fight off waves upon waves of enemies coming from both sides of one of the map

The beautiful 2D environments with dark forests, orc mines, creeks, and mountains are bright, vivid, and colourful.  Add to that the cute cartoonish characters and you will find that CastleStorm is a pleasure to look at. Those with a lower end graphics card (like me!) should have no issue playing; I found the game to be quite smooth without any frame rate issues. The music was cute and quirky, and the little voice acting in game was well done, although at times I found it very annoying when certain phrases were repeated over, notable when playing as the hero Freia.

CastleStorm takes the tower defence genre and adds elements of physics destruction, real-time strategy and role-playing games, making for a very interesting mix that works quite well. It is a casual yet complex game experience that is delightful to play, alone or with a friend, something that this tower defence hater truly enjoyed. Playable on most PC’s with a huge amount of single player and multiplayer content for a mere $9.99, I recommend CastleStorm to anyone looking for something refreshingly different to play.