It’s not very often that I walk away from a game in such a tizzy where I have to stop myself from a ‘controller throwing rage quit’ episode.  Well, Deep Silver and Rubicon Organization’s Narco Terror game for the XBLA managed to push me to that point.  For the most part, I consider myself a level headed and even tempered fella but every once in a while someone or something pushes me to that point where I lose my shit.  Narco Terror did just that.  It is not that Narco Terror is necessarily a bad game.  There are many positive elements at play here.  It is just one that frustrated the crap out of me (on top of all the other issues) and in the end Narco Terror remains a downloadable game that should only be played if you really have nothing else on the go.

On the bright side, Narco Terror does have a certain flare to it and reminded me of a cheezy episode of the A-Team.  Even the narrator’s voice when you first fire up the game will remind you of the 80’s A-Team opening intro.  It is an over-the-top game that is an action-packed twin-stick shooter inspired from the classic action movies from the 80’s.  There is even a little hint of Double Dragon as enemies come barreling out at you from automatic garage doors.  Narco Terror never takes itself too seriously and it never forces you to pay attention to the story.  Yes there is a story but it is one that lacks any substance.  So you really don’t have to pay any attention to it at all.  That said, you are not playing Narco Terror for its story or for its goofy dialogue but rather will play Narco Terror for its gameplay and on gameplay alone Narco Terror is not too shabby but far from stellar. 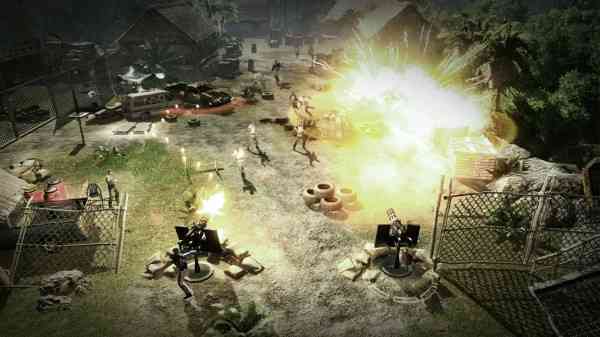 Much of Narco Terror consists of moving from point A to point B, mowing down the many, and I mean many, enemies you face along the way.  For about the first 200 Xbox Achievement points (2-hours or so), I was cruising along just fine taking down enemies equipped with knives, shotguns, pistols and machineguns.  Moving my character with the left stick and shooting with the right stick took some getting used to but once I became acclimated with the games controls I was ‘off to the races’.  I did not find my weapons to be all that accurate and could have been a little more refined but hey I also recognize this is more of a budget tittle.   There are some sequences where you will navigate a boat, plane and even a turret gun but the majority of the game consists of advancing from location to location, shuffling about a room and aiming the right stick towards the enemy.  It is satisfying at times but does get repetitive awfully fast.

There are some chokepoints in the early going that frustrated me; however, for the most part I moved along with ease.  Then came the suicide bombers, taller enemies equipped with Gatling guns, oversized ninja warriors, enemies on hilltops equipped with rocket launchers and those relentless flame throwers.  These bastards will cause you to run around like a chicken with its head cut off.  Health packs and shoulder rolls start to become your only means of survival.  You need to keep moving and move fast in order to survive.  After some time, it became trial and error.  Then after about the 4th or 5th death, I found the fun I was previously having managed to drop like a rock.

Much like any other twin-stick shooter, you do have some weapons at your disposal but it is those rare instances where you pick up a powerful laser rifle or blaster cannon (which remain active for only a short period of time) the game truly shines.  The unfortunate part is that these weapon bonuses are few and far between.  I just wish the developers could have thrown a few more bones when it came to the special weaponry.  Your equipped weapons (which become unlocked as you progress along) can also pack a punch at times but during those sequences when you are inundated with enemies, your guns do not feel effective and the upgrades to your equipped weapons hardly feel significant.

The level themselves are hit and miss.  Far too often I was thrown into rooms that were simply too small to maneuver around.  These areas hold their own when say only a half a dozen enemies are hunting you down but any more than that it remains simply too small an area you get some space between you and enemy. 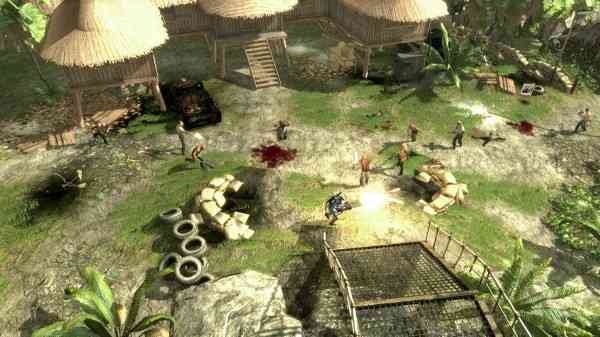 Visually, Narco Terror is not a bad looking game but it certainly isn’t a great looking one.  It is a game also filled with technical issues such as screen tearing and frame rate issues.  I guess some of this can be expected given it’s a cheaper game but the cut scenes themselves appear a tad dated.  Although it may appear intentional, I would have preferred a little more detail and a little more when it came to the games textures.  Enemies themselves offer up some variety but again they visually lack the detail seen in so many other games at this juncture in the Xbox 360’s life.  Easily the highlight when it comes to the graphics department is the in-game outdoor levels.  The verticality and greenery is impressive at times.  I have never seen a cocaine field look so damn good…

When it comes to the games sounds, Narco Terror didn’t leave any lasting impressions.  Granted your character does deliver some pretty funny one-liners at times and he does have a Duke Nukem quality about himself.  Yet the dialogue never seemed to complement the gameplay.  Additionally the music seemed uninspired and mostly forgettable.

At the end of the day, Narco Terror is merely chewing gum for the brain.  It is a frantic mind numbing twin-stick action shooter that is relentless at times.  There is a story to be had but it takes a back seat to the twin-stick shooter chaos.  For approximately $10.00 bucks, Narco Terror is certainly not the worse purchase you could make this summer but it won’t be your best.   If it’s pissing down rain this weekend and you need a Black Ops 2 break, Narco Terror might be the perfect stop-gap option for you.  Just lower your expectations a little bit and don’t expect to return to this game a month from now.

Next Rise of the Triad (PC) Review – A Throwback to FPS Games of Old
Previous CastleStorm (PC) Review – Looking for Something a bit Different?