Carnage is unleashed like a typhoon around me. Dervishes of blood, entrails, and flame engulf me in a flurry, and the heat of the fires warm my cold metal heart, and the tint of the blood brings me joy. I am the Butcher. Which is to say I am a murderous cyborg hell-bent on eradicating the last of human civilization. Come at me.

The Butcher is Transhuman Design’s grimy homage to the hardcore metal-shooters of the 90’s. Titles like Doom and Heretic are immediately brought to mind, not for gameplay similarities, but because Butcher revels in a certain bloodlust that cuts right to the core of what made those games so gnarly: buckets and buckets of blood and giblets. Of course, you’ll have to work to fill those buckets.

Luckily, filling them happens quickly as Butcher is a twitchy killfest. It plays like a roided out Soldat (dated reference, I know) with an emphasis on level navigation and exploration. Devilish traps, spinning blades, and flamethrowers litter the industrial hellscapes you’re meant to scour, so without proper care, the majority of the blood that ends up in those buckets might be yours. And in fact, you will die. Lots. Butcher is not an easy game. Many of these levels are built with a trial and error mentality. Traps that you couldn’t have known were poised to snap your legs off will do so, you’ll remember their position and avoid them next time, only to have a new one snap your head off a few feet further. Stuff like that feels cheap, and can quickly raise the blood pressure, but thankfully they don’t lean on that stuff too heavily. Who knows, maybe you’ll avoid certain death because by sheer accident on a few occasions I made it past a long series of traps that normally would have killed me over and over again. I felt like some idiot hero inadvertently teasing death as walls collapsed around me, and pits of lava rose, only to singe my toe hair.

The combat in Butcher, for me, is a mixed bag. There are plenty of weapons that you’ll pick up over the course of the game and they feel great to fire, yet something about the combat left me feeling dissatisfied. The problem isn’t with the weapons themselves. The assault rifle is chunky and loud and sends the screen shaking violently, and the railgun sends out a ray of devastating murder that is truly righteous. The problem for me came in the lightning quick pace of combat. Everything blows up so fast (yourself included) that you hardly have time to register what the hell just happened. You end up playing the game mostly on instinct and feel rather than acting out a plan of action. When it comes down to it, it’s a matter of taste. If you like to take your time and place your shots accurately, Butcher isn’t for you. But if you enjoy the breakneck speed and mayhem of, say, Hotline Miami, Butcher is going to make you quite happy. You sicko. 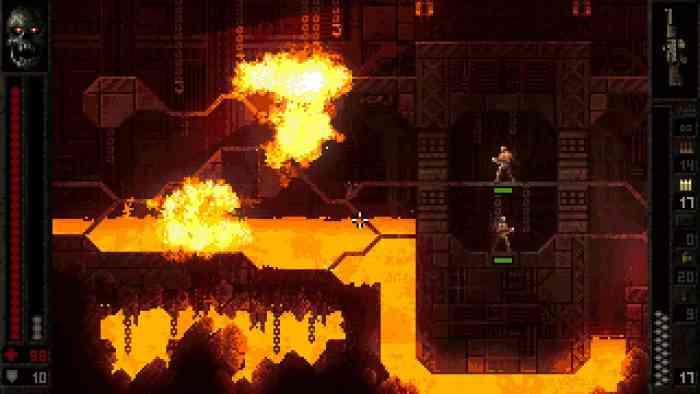 Visually, Butcher is pretty rad looking. Everything is a smudgy grey mess of pixelated blood and stone and iron. It looks both simple and detailed simultaneously which can be kind of jarring (in a good way) at times. Parts of the background animate with barely two frames of animation and look kind of cheap, but then an enemy explodes in the foreground in a glorious burst of flame or blood. The flame and blood are what you’ll remember. It didn’t take long for me to vibe with the look that Butcher was going for and the look is greatly enhanced by the sound design. I already mentioned how chunky and huge the guns sound, but also every enemy screams these tortured rales upon death that flesh out the vile universe Butcher exists in. Oh and the soundtrack bumps too.

That being said, Butcher is a tough one to recommend to everyone. It does a lot of things right, but still feels like the sum of its parts don’t quite add up. When it comes down to it your enjoyment of Butcher will directly correlate to how quick and nasty you like your games. But if quick n’ nasty sounds good to you, you’re in for it, because Butcher is awfully quick and wonderfully nasty.

Some Guy Actually Trained Rats to Play VR DOOM, For Science
Next Dawn of Andromeda Review – Space, It Keeps Going and Going and Going…
Previous Moonfall Review – Golden Axe for a New Generation, Just Not as Good