4X games follow a strict set of criteria following the 4X model: expand, exploit, explore, and exterminate. Each game then needs something to make it stand out, something to set it apart while still keeping the familiar 4X feel. Dawn of Andromeda takes the approach of making a game less focused on the micromanagement of an empire and more on the exploration of the galaxy. While it sounds like a great approach, in practice the experience can be less than stellar.

Developed by Grey Wolf Entertainment and published by Iceberg Interactive, Dawn of Andromeda is best described as Civilization among the stars. Players will begin by selecting one of eight races – each with their own set of unique attributes which make them allies or enemies of other species based on ideology, theology, and more. For those a bit pickier the game also offers the option to customize the stats and attributes of a custom race, or, for a challenge, play with a randomly generated one.  From there, players have a large selection of options that go into customizing their generated galaxy before setting out to conquer the stars. 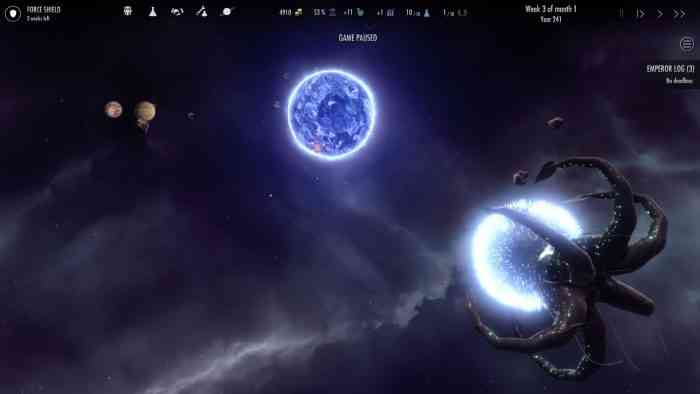 Simplicity is the name of the game here. Grey Wolf Entertainment specifically wanted to make this a game easily accessible to players and cut out as much of the micromanaging as possible. While it’s refreshing to focus on the simpler things, too much has been cut down and removed. Time flows in intervals of weeks as opposed to being turn based and while the clock can be accelerated, it doesn’t leave much for players to do in the early years of the game. Beyond having a scientific research in progress and building a new structure, there is little – if anything – to do at your home planet. This sort of relaxed command should leave you feeling like you have more time to explore the galaxy, but it doesn’t quite hit the mark here.

“Blueprints of ships can be altered to add special mods for mining, colonizing, combat, and scanning planets, but it seems to drag by at a snail’s pace while waiting for the right ship to build.”

In your abundant free time, vessels can travel amongst the nearby star systems and explore in search of resources to mine and planets to inhabit, however crafting a ship also takes a few weeks so the opening hour of the game is mostly following your first ship around the map and discovering places you need specialized ships to interact with. Blueprints of ships can be altered to add special mods for mining, colonizing, combat, and scanning planets, but it seems to drag by at a snail’s pace while waiting for the right ship to build. What can be worse yet is the colonization of a planet: there is no guarantee it will work. Sure it adds a quirk to a previously established system, but a colony vessel takes a decent chunk of time to build in your queue, plus the flight time to get to the habitable planet. Colonizing a planet is met with a progress bar and by the end, it can (and most likely will) fail, leaving your hard spent time and resources moot. 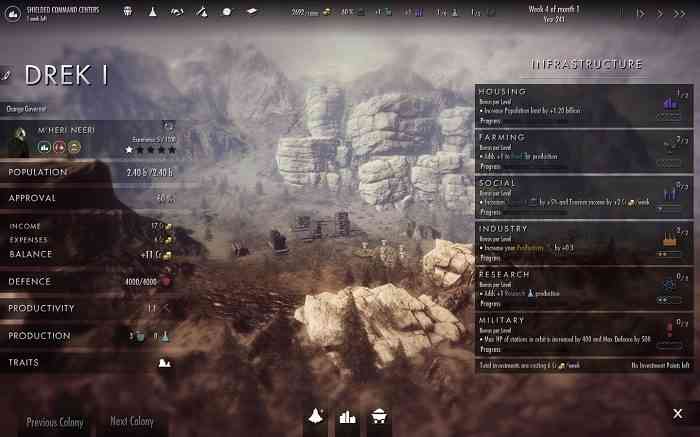 Like any good 4X game, expansion is key; so this kind of touch – while interesting – is frustrating, especially when you are left with very little in the way of managing your race in between building more colony ships. Interacting with other alien races is intriguing as you flip through the standard diplomatic options, but it’s the chance encounters with individuals that stand out the most. While exploring, players can meet traveling merchants selling star charts and a number of other items to aid in your travels. Pirates and wanted men with a bounty on their head will also appear and are the only entities you can actively engage in combat without requiring a declaration of war.

Graphical details help pass the time as you look at the very well crafted planets you colonize, not to mention the fine details of how you affect the galaxy: when sending a mining ship to begin extracting minerals from a rich source you can actually zoom in and see the facility at work as it rotates in orbit. It’s a nice little detail, yet not enough to make up for the lack of things to do.

“Dawn of Andromeda, however, makes you play the long game: enemies are virtually unable to rush you in combat as they are hindered by the same tech tree you are and this means the biggest rewards come later in the game.”

Most strategy players know the opening dozen or so turns are crucial to developing your tactics and what you do will make or break your experience. Dawn of Andromeda, however, makes you play the long game: enemies are virtually unable to rush you in combat as they are hindered by the same tech tree you are and this means the biggest rewards come later in the game. While this is a moderate introduction into the 4X genre, there simply isn’t enough of the necessary substance here to carry itself. Should construction times be cut or simplified at least players would have more to do, but as it stands it’s a lot more waiting than anyone will want to put in. 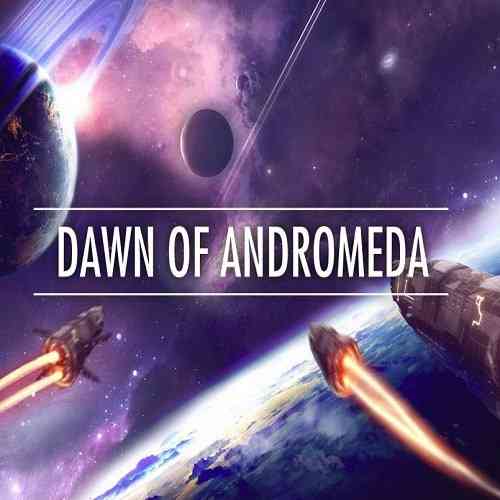